With Cool Heads, Pragmatic Actions, COVID-19 Will be Overcome


June 20 , 2020
By Daniel Taye ( Founder and manager of a language services company in Addis Abeba. )

Despite the recent and reasonably worrying spike in the number of cases, it is still possible to overcome this outbreak before it causes devastation. This requires keeping a cool head and acting within our means in a determined and pragmatic way, writes Daniel Taye (taye.daniel@gmail.com), founder and manager of a language services company in Addis Abeba.

The spread of the Novel Coronavirus (COVID-19) pandemic was attended by stark warnings and dire estimates from renowned epidemiologists and public health institutions.

Britain, France and the United States could have seen over three million deaths between them in the absence of drastic containment measures, Imperial College of London warned. These estimates were then extrapolated to other countries, including extremely alarming figures for Africa.  Almost every African country, panicked by these forecasts, has put in place drastic lockdown measures whose economic and social consequences will be severe.

Ethiopia, depicted as a country with weak health systems that will not be able to achieve prevention, has opted for measures that include enforcing social distancing rules, limiting public gatherings, closing institutions of higher education and initiating surveillance and screenings. Other interventions have included programmes to raise public awareness and promote frequent hand washing and disinfection of homes.

An article by Prime Minister Abiy Ahmed (PhD) underlined the extreme difficulty for a country such as Ethiopia, which has a large population that lives at a subsistence level, to opt for total lockdown. It was one of the public manifestations of pragmatism that we saw on the African continent with that of Patrice Talon, president of Benin.

Was it the right choice? What can be said four months after the first case of the virus was confirmed on African soil, which has now recorded around a quarter of a million cases and thousands of deaths?

To respond to these concerns, we have to revisit the forecasts on which these emergency containment measures were based.

Mortality figures in countries such as France and the United Kingdom, and even Sweden, which did not adopt strict lockdown measures, do not seem to confirm earlier projections. Recent indications, where the outbreak is plateauing, and even subsiding, show that mortality will be several folds lower even in these most affected countries.

As for Africa, the continent has registered much lower mortality rates without taking measures used in the two European countries, even if we cannot be sure what the pandemic will be like in the near future. The number of lives that could be lost in Africa due to COVID-19 was expected to be between 300,000 and 3.3 million, according to the United Nation’s Economic Commission for Africa’s (UNECA) report back in April 2020.

It is expected practice to resort to the most pessimistic metrics in epidemiology to encourage governments to take precautionary measures. But certain policy options that governments can use to respond could be extremely costly for society. Total lockdown in this pandemic’s case would thus have been too economically costly to justify.

A brief look at the history of epidemic outbreaks reveals that their behaviour is multi-factorial. Their severity depends on the demographics of the population, the ecosystem and human intervention. Influenza, for instance, does not strike in temperate and warm countries as in colder places, while Ebola seems to behave differently in and outside of tropical zones.

It is, therefore, important to first observe the behaviour of the virus in each context and then make projections that reflect reality. Despite the flack Ethiopian authorities receive for a weak health system, there is a case to be made that they should carry out observations, draw out their predictive indicators and develop strategies for the fight against the epidemic. It would be a mistake on our part to attempt to apply similar preventive measures without considering clinical data developed locally.

The same goes for treatments to be used in new diseases such as COVID-19. This question has sparked heated debates in the developed world. On one side are those that demand that we wait for the results of clinical trials conducted with the highest standards. This is in contrast to those that advocate trying out the most promising treatments while waiting for better options, especially if the side effect of the treatments are known to be mild.

Curiously, countries that have best managed to contain the spread of the virus, specifically in South East Asia, have gone beyond a controversy of this kind. China had in February touted Chloroquine, an anti-malarial drug, as an effective treatment with the addition of traditional treatments. South Korea has developed its own protocol, and Japan seems to be betting on another drug, Avigan, which is usually used against the flu.

It is vital to follow this example of pragmatism, and define a treatment plan which borrows from these countries, while monitoring advances in research toward more efficient treatment.

In this atmosphere of irrational panic, Ethiopia must also look into and use its strengths. Its first advantage is the proximity it enjoys with the big winner of this crisis: China. It is already reaping some benefits from it since it has positioned itself as an essential hub for the distribution of Chinese medical aid in Africa and even beyond in recent weeks. This relationship should also extend to learning from their experience with containing COVID-19.

The other strength that it can account for is the health extension programmes, which is a successful and a defining feature of the Ethiopian health system and gives the health authorities an important weapon to detect infectious cases and spread awareness. An army of health workers that can be deployed whenever cheaper testing kits are made available, and whenever a treatment option is developed, will complement the fight against the virus.

While Ethiopia has already undertaken door-to-door screening, these visits need to be frequent. It is an effort that needs to be sustained until the end of the pandemic if it is going to succeed.

Despite the recent and reasonably worrying spike in the number of cases, it is still possible to overcome this outbreak before it causes devastation. This requires keeping a cool head and acting within our means in a determined and pragmatic way. 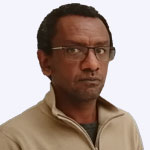 Founder and manager of a language services company in Addis Abeba.

"The party has a pragmatic outlook."

One Pathogen to Another, Lessons from Fight Against COVID-19 to Malaria