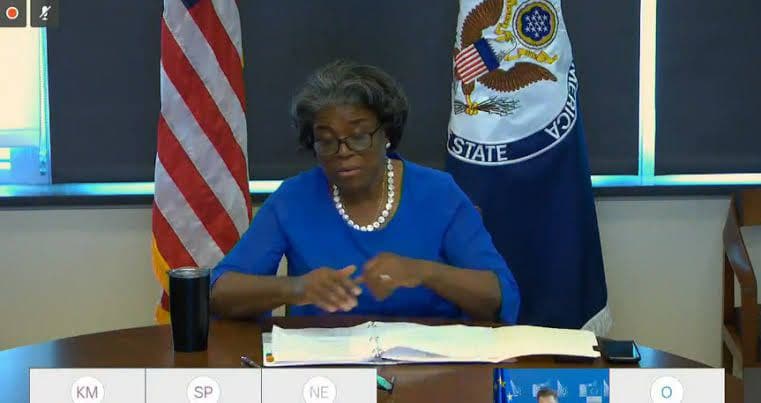 From US Ambassador to the United Nations and Commissioners of the European Union to chiefs of UN agencies and heads of international aid organisations, globals leaders are displeased with the "insufficient attention" the world has given to the crisis and suffering in the Tigray region and have decried the inaction to stop the ongoing war.

Since November last year, the federal government has launched military operations described as a sovereign exercise in "law enforcement,” which morphed into a protracted civil war also involving the Eritrean army.

The transatlantic alliance has called for the immediate withdrawal of Eritrean forces and urged for a ceasefire between the Ethiopian army and those now known as the Tigray Defense Forces (TDF). It is a prelude to ensuring aid agencies will "stay and deliver" emergency food assistance to a population feared to face a threat of famine. Ethiopian authorities downplay the risk of famine and insist they deliver humanitarian help to millions of people caught up in the war in Tigray.

Frustrated by China and Russia to table the crisis in Tigray at the UN Security Council, the transatlantic alliance has brought the issue before the G7 leaders' summit, scheduled for tomorrow.

"G7 has Ethiopia on its agenda," confirmed Jeffery Feltman, US special envoy to the Horn of Africa.

Appointed since the rapture of war in Tigray, Feltman has toured the region and the Middle East, talking to leaders to resolve the crisis in Tigray and address the broader political polarisation in Ethiopia, where he sees the understanding between the US and some of the countries overlaying.

"We need to address the immediate issue of humanitarian need and human rights concerns," Feltman told a virtual session called today on Ethiopia ahead of the G7 summit. "But, we need not lose sight of the long-term issue to bring political resolution to Ethiopia's long-term problems. These are political crises that need political solutions."

The world knows what is happening in Tigray, according to Pramila Patten, chief of the UN agency that monitors sexual violence. It does not have to wait to hear the stories of rape victims and count bodies of women and children before it acts, she said.

It is a desperate call that was echoed by all the panellists at the forum and emphasised by Ambassador Feltman.

"Now is the time to move from analysis to action," said the Special Envoy.

The G7 summit is anticipated to respond to this call, passing resolutions to ensure Ethiopian leaders relent to the transatlantic demands of the withdrawal of Eritrean forces, ceasefire, unfettered access to humanitarian workers, independent international investigations on atrocities committed, holding perpetrators accountable and the beginning the road to political dialogue.

Meditating About Leaders: Is Personality the Issue?

The debate around corporate social responsibility (CSR) remains rife even today. But...

In Ethiopia, women's main responsibilities are considered to be taking care of the fa...

The wait for Ethiopia’s sixth national elections, since it became a federal republi...

Electoral Best of Bad Situation. Time Is the Essence

In retrospect, it is nothing less than astounding that the 2015 national elections we...

Those entrusted with public office may love throwing events; but, no one is doing it...

'To Have and To Hold,' Easier Said than Done

All people around the earth, regardless of gender, religion, race, culture, or outloo...

For the past few months, I have been using Adore Addis in the Bole Atlas area as a co...

Why that Shot, Doc?

Too many of us do not have a culture of inquiry. It could be the way we were raised – obedient and a bit subservient – or a tradition of...

When I decided to have lunch with an old friend in a relatively modest restaurant, I had no idea that the topic of tipping would come up. Th...