May 1 , 2020
By Abebe Bekele ( founding dean and deputy vice chancellor of Academic & Research Affairs at the University of Global Health Equity, professor of surgery at Addis Abeba University’s School of Medicine, and a fellow of the College of Surgeons of East, Central, and Southern Africa and of the American College of Surgeons. )

For a continent whose recent history has included a lot of violent conflict, economic slowdown caused as a result of lockdowns is a recipe for disaster. Economic stress breeds frustration, especially with the authorities, heightening the risks of unrest, renewed civil wars and military coups, writes Abebe Bekele, founding dean and deputy vice chancellor of Academic & Research Affairs at the University of Global Health Equity, professor of surgery at Addis Abeba University’s School of Medicine, and a fellow of the College of Surgeons of East, Central, and Southern Africa and of the American College of Surgeons.

Some have described the COVID-19 crisis as a “great equaliser.” After all, it has invaded the world’s richest economies, with the virus infecting some of their most prominent figures, from politicians such as the United Kingdom's Prime Minister, Boris Johnson, to Hollywood royalty like Tom Hanks. But developing countries, especially the poor within them, remain far more vulnerable than their developed-country counterparts, not only to the pandemic’s health consequences but also to insecurity – and instability – stemming from the response.

Thus far, the most effective measures for limiting the spread of COVID-19 are travel restrictions, physical distancing rules, and full quarantine, where applicable. But rapid implementation is essential.

We have seen these measures taken in some African countries. In Rwanda the government grounded all passenger flights for 30 days after confirming just 11 cases of the virus and then placed the entire country on lockdown for 28 days. Neighbouring Uganda soon followed suit, along with Nigeria, South Africa and Ethiopia, among others.

But the responses elsewhere have been fragmented and weak. Given the scale of global interconnectedness, this should worry everyone.

Developed countries have stronger healthcare systems, but they are still deeply vulnerable: the United States recently reported more than 1,800 COVID-19-related fatalities in a single day. Imagine the effects of a similar outbreak in Africa. There are fewer than 500 ventilators in Nigeria, a country of 200 million people – roughly two-thirds the population of the United States, which has 172,000 ventilators. And as long as the virus is spreading in one country, every country is at risk of new waves of infections.

But the danger extends beyond the virus itself. In many developing countries, the vast majority of workers depend on modest daily wages and cannot work remotely. Social-distancing measures thus threaten their very survival. Only through strong leadership and informed decision-making can African governments protect these vulnerable groups.

Again, some countries are setting a positive example. Rwanda’s government has announced plans to deliver food to more than 20,000 vulnerable households in the capital, Kigali, and to provide essential services, such as water and electricity, for free. But on the whole, social protections are nowhere near adequate to safeguard Africa’s poor during lockdowns.

For a continent whose recent history has included a lot of violent conflict, this is a recipe for disaster. Economic stress breeds frustration, especially with the authorities, heightening the risks of unrest, renewed civil wars and military coups.

The pandemic could be a “national security crisis first, an economic crisis second, and a health crisis third,” as John Nkengasong, the director of the Africa Centres for Disease Control & Prevention, has warned.

The international community is not doing nearly enough to help African countries mitigate the COVID-19 threat. This is partly a matter of resource constraints: in a pandemic, funding from multilateral institutions like the International Monetary Fund, the World Health Organization and the World Bank must be shared across many countries, and governments are focusing their resources on domestic needs.

Public resources are so limited that many countries are now relying on philanthropic aid. For example, the Chinese billionaire Jack Ma donated 1.1 million testing kits, six million surgical masks, and 60,000 protective suits and face shields to Africa. He also donated one million face masks and 500,000 test kits to the US – something that would have been unthinkable just a few months ago. US corporations and billionaires have also made large donations.

But we cannot rely on the benevolence of philanthropists and corporations to win this battle. We need a unified global response - including coordination on measures like travel restrictions and quarantine rules - with effective leadership. And we need the governments of rich countries and multilateral organisations to increase support to poor countries, without adding to their international debt.

Resources - from personal protective equipment to testing kits to ventilators - should be allocated according to need. At a time when Tedros Adhanom (PhD), WHO director-general, is warning of an “alarming acceleration” of virus transmission in Africa, the continent’s need is clearly growing.

But containing COVID-19 is not enough. Countries must urgently strengthen their health systems to protect against future outbreaks. This requires investments not only in equipment and infrastructure but also in personnel, especially medical professionals who are trained to think holistically. At the University of Global Health Equity in Rwanda, we teach our students from the outset to look beyond the immediate clinical reality to account for relevant social, economic, historic and political factors.

The COVID-19 crisis has demonstrated how fast a new disease can envelop the world, causing widespread suffering and death. Rather than wait for the next outbreak to erupt, and then play catch-up again, all countries should be working to apply the lessons of this pandemic to bolster preparedness and prevention.

Although COVID-19 does not affect all equally, it does confirm the axiom that, in today’s interconnected world, global challenges require global solutions. The only way to build a safer post-COVID 19 world is to ensure that Africa is not left behind. 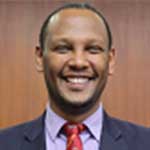 founding dean and deputy vice chancellor of Academic & Research Affairs at the University of Global Health Equity, professor of surgery at Addis Abeba University’s School of Medicine, and a fellow of the College of Surgeons of East, Central, and Southern Africa and of the American College of Surgeons.

The COVID-19 Crisis through the Gender Lens

The Belt and Road Initiative and Africa: A Debt Trap?

The Less Fashionable Path Out of Global Food Crisis