African Made, for Africa and Beyond 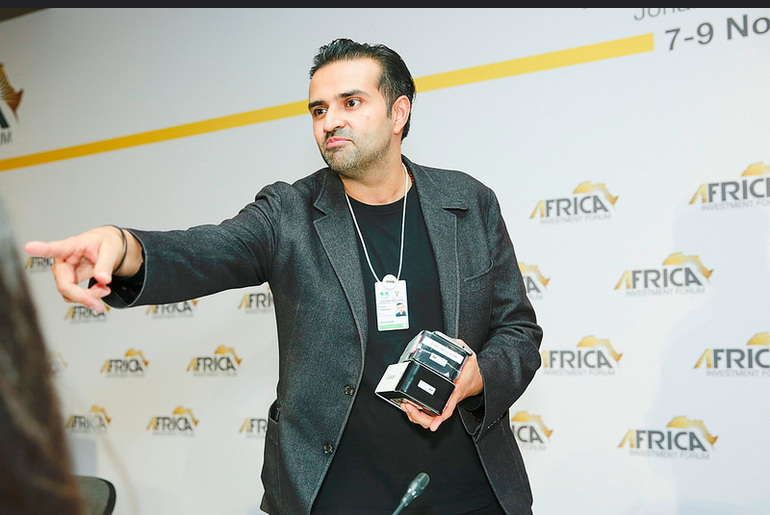 Ashish Thakkar is the Ugandan born businessman who is behind Mara Corporation, founded in 1996. In 2010, his group was selected by the World Economic Forum as a Global Growth Company for operating in close to 26 countries and employing more than 11,000 people. With the launching of MaraPhones and manufacturing plants in five sub-regions of the African continent, Thakkar aspires to create more than 200,000 jobs.

Thakka has had ambitions to develop a smartphone handset made in Africa, by Africans for the African market and beyond. His company, Mara Corporation, has a presence in almost half of the 53 countries in the continent.

Thakkar is passionate about his views that if the Americans have Apple, the South Koreans Samsung and the Chinese Huawei, it is about time Africa has its own brand.

“Finally, Africa has Mara,” Thakkar told the summit gathered in Johannesburg, South Africa, in the first week of November 2018.

Organised to provide a platform for prospective investors and project owners in the continent, the African Investment Forum was held as a first, but more than an event. Admasu Tadesse is president of the Eastern & Southern African Trade & Development Bank (TDB), one of the dozen financial institutions active in the continent who partnered with the African Development Bank in organising the forum. The forum was designed as a “deal-making and transactional platform.”

Although “transactional” was the theme, the three-day forum was characterised as a shopping spree for international capital to put their money in projects like the one presented by Thakkar. His was one of 302 projects that tabled close to 209 billion dollars at the forum. And the biggest lure was the potential in demography, a rising middle class, consumption and potential as an agricultural hub that Africa is believed to offer international capital between now and 2050.

“I will Mara-You,” said President Adesina of the Africa Development Bank.

With an estimated size of two billion people, the continent is expected to surpass China and India combined in 30 years. Africa possesses 65pc of the uncultivated land available in the world, with the potential to develop a one-trillion-dollar agribusiness industry by 2030. It has a growing middle class and expanding consumer base with an estimated 5.6 trillion dollars of spending capacity in seven years.

“Think about it,” said Akinwumi Adesina (PhD), president of the AfDB, luring international investors and guests that included Sahle-worq Zewdie, Ethiopia's president, and other heads of state. “Where is the continent that will have the highest number of youth in the world and could become the workshop of the world? Think of China and India today, but it will be Africa in 2050.”

It is a projection shared by Chris Coons, an American Senator, who believes that better than anyone, it is China that figured that “the next China after China” will be Africa.

“There is no doubt that we are all here at a historically-defining moment for investments in Africa,” Adesina told the gathering. “We're doing business differently. Africa needs to start believing in itself.”

That difference is about changing the perception by the global investment community that views Africa as a high-risk destination and changing the narrative of the continent riddled with conflict. Launching a high-tech product to break into a highly competitive and cutthroat global market is part of the effort to change these negative narratives.

When launched next month, with a price tag of 190 dollars, MaraPhone will be the first African made smartphone designed by Africans for the African market and beyond, according to Ashish Thakkar, CEO of Mara Corporation.

Africa's market for smartphones is projected to reach one billion in a few years, doubling from the current 400 million in use now, but none of them are made in Africa. The Ugandan born businessman, Thakkar, is determined to tap into this vast market by offering “high quality but affordable” phones operating on Google's Android operating system.

“The Chinese dragon and the Indian Tiger have had their days,” Thakkar said of the significance of branding his smartphone Mara, which means "lion" in Swahili. “This is the time for the African lion to roar.”

But the biggest catch is Thakkar's pledge that Mara Phones have longer battery-life, claiming that he goes to sleep with 20pc battery power still left on his phone after a long day of usage.

“I'll Mara-you,” Adesina cracked a joke during one of several press briefings he gave during the week.

Priced at 190 dollars, the Rwandan and South African assembled Mara is expected to hit the market in the first week of December 2018. The plan is to open multiple manufacturing plants, each with investments values of 100 million dollars, in all five sub-regions of the continent. One of these plants allocated to East Africa could be in Ethiopia, according to Thakkar.

“Ethiopia is high on the list of where Mara desires to open a plant,” he told Fortune.

Investments such as this are hoped to change the way the outside world perceives Africa. Many hailed the forum in Johannesburg for its historic platform in matching capital with projects.

“It's difficult to feel when history is in the making,” Victor Oladokun, the communications director of AfDB, told the media at the end of the forum on November 9, 2018. “Indeed, this week history was made.”

Oladokun attributed his enthusiasm to deals concluded at the end of the investment summit. The organisers claimed that there was a stampede by investors to finance a railway project in South Africa at one point. Many said their expectations were exceeded after 42 of the 60 tabled deals were signed with a total investment value of 32 billion dollars.

Ethiopia's share of these deals was small, about 100 million dollars, in the form of financing provided by the African Development Bank to pay for off-grid electricity provisions. Despite Ethiopia's advancement over the past 25 years in expanding its hydroelectric power generation capacity, currently estimated at 4,000MW, there are no less than 35 million Ethiopians believed to be left out of the national grid, and nearly half of the nation's territory remains outside of electricity coverage.

The federal government has plans to diversify the source of power generation beyond hydroelectric to reach over five million households by 2025 using solar and thermal energy. Adesina hails the financing made available by AfDB as an example of the kind of expansion into renewable energy by the continent.

“I want to commend [Ethiopia's] government for this commitment,” said the President of the AfDB after the letter of intent was signed between Amadou Hott, vice president of the Bank, and Bekele Seleshi (PhD), Ethiopia's Minister of Water, Irrigation & Electricity.

Beyond Wax and Gold

It's Time for African Prints

Marshall Plan for Africa Now or Doom by 2050

The Day Africa Finally Connects Itself

The High-Growth Promise of an Integrated Africa