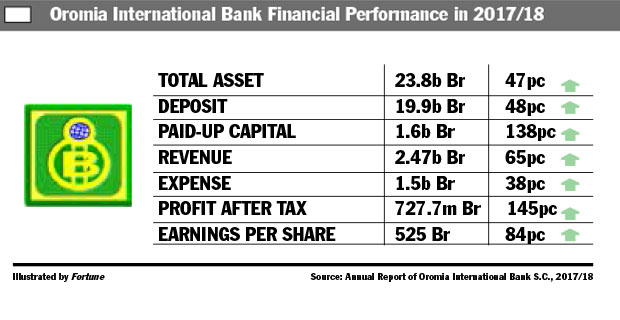 Such a remarkable surge in profit is not common in the financial sector. The Bank almost doubled its earnings for its shareholders to 525 Br per share compared to its previous annual report.

For Abie Sano, president who led the bank for the past 10 years, the result comes with years of hard work and resilience amidst challenges.

"When we came to the financial sector a decade ago, there were policy changes, and the global economy was falling," said Abie, remembering his first appointment to lead the bank after four months into operation. "Since then we showed unwavering steady growth."

The income from non-interest banking and foreign exchange also increased. The income from interest-free banking and the governing bank bond soared by 57pc to 1.6 billion Br. The National Bank of Ethiopia's decision to increase interest rates last year led the growth in this regard.

"Achieving this a level of increase in times of political and economic uncertainties is impressive," Abdulemenan Mohammed, a financial expert, told Fortune.

The bank has also grown its interest from loans and investments in the central bank's bills and from interest-free financing to 11.6 billion Br.

"We have increased our revenue from loans and investments," Abie told Fortune. "Besides, we have also managed the expenses and collected a good share of the forex market."

While the company's revenue reached 2.4 billion Br, showing a 65pc increase from the previous year's report, it is accompanied by enormous expenses.

The expenses exploded by 38pc to 1.5 billion Br. One of the most significant expenses is the incremental rise in interest expenses, which reached 543.4 million Br, a 65pc jump.

For the Bank, the expense is moderate and reasonable.

"The main reason for the incremental rise in interest expenses is the vast deposits mobilised during the year," argues Abie.

The bank has paid over 543.4 million Br as interest expense.

"Besides, the central bank also increased the interest rate on loans," Abie told Fortune. "This factor plus the devaluation of the Birr has led to the reasonable surge in interest expenses."

Oromia Bank's salaries and benefits for its 3,226 employees also soared to 622.6 million Br, a 46pc jump compared to the previous report.

The Bank adjusted the salaries and benefits in June 2017, according to Abie.

"That is why the report shows a huge difference in salaries and benefits," he said.

"This is a result of the years of expense control and long-term fixed asset investments," Abie said.

The Bank mobilised 19.9 billion Br as a deposit. The deposit has shown an increase of 46.7pc. The loan-to-deposit ratio fell slightly to 58pc from 60pc and is lower than the industry average.

"The Bank is sitting on liquid resources," said Abdulmenan. "The Bank should expand its loan disbursements."

This has the attention of the Bank as well.

"We do understand that we have a liquid asset in our hand," Abie told Fortune. "But this was as a result of external factors."

While the bank mobilized 19.9 billion, it could only disburse 58.5pc of it. The deposit-to-loan ratio went up to 85pc when compared to the previous year's 61pc, which was lower than the industry average.

The leading cause for the liquidity is the cap that was set by the governing bank and the aggressive deposit mobilisation, according to Abie.

"We overpassed the cap that was set by NBE before it came into effect," he said.

When the central bank introduced a cap on bank loans to businesses in October 2017, except for manufacturers and exporters, the bank had already passed the limit.

The Bank investment in the Central Bank's bills has reached 4.85 billion Br, a 40.6pc increase. The Bank has also increased its paid-up capital by 37.6pc to 1.6 billion Br.

"We have projected to reach two billion before the end of the year," the president told Fortune.

Banks Disburse 55b Br in Loans