December 11 , 2020
By Ephrem N. Kerego (MD) ( a practising medical doctor with a keen interest in health equity, health economics and current affairs. He can be reached at ephremnk2014@gmail.com. )

With the advent of modern education about a century ago, Western ideals, beliefs and thoughts started to infiltrate the minds and souls of Ethiopian students. The concept of modernisation crept into the vernacular, style and way of life of the people of the time.

It was an influence felt particularly on those lucky enough to earn an education. The subsequent socio-political atmosphere of the epoch was ignited, ruled and propagated by these "woke" students. The repercussions of those proceedings are still palpable today. The Western concepts of liberty, freedom and the rule of law – which held an egalitarian society as their ultimate end - started to surface into the political discourse, especially during the latter half of the past century.

Universities, and to a certain extent some high schools in big metropolitans, were the epicentres of these seismic changes. Exposure to the outside world both through physical presence and media widened the intellectual horizon of these students. Previously unthinkable or suppressed thoughts found outlets through fledgeling yet influential print media. More and more students started overt and covert engagements in this socio-political struggle.

However, the movement was neither monolithic nor uniformly structured. Different groups carrying different agendas emerged. These agendas ranged from mild challenge to the existing monarchy to fully-fledged armed struggle with secessionist aims. Despite this disparity, their struggles were built around three elements – land reform, rights of nations and nationalities, and democracy. In their brazen challenge to authority, nonetheless, they failed to articulate and present a more direct route to the alleviation of poverty.

This is not to say that the challenges that they considered were unimportant. Start with land reform, epitomised by the famous slogan “Land to the Tiller.” The nobility were largely landlords that had little to no productive contributions yet owned large swaths of land. The peasants who tilled the land, even if they possessed ristrights (communal ownership of land), were faced with heavy tributes collected by the nobility and passed on to the central government.

The struggle of the students aided by the ascent of the Dergueto power resulted in land reform after the overthrow of Emperor Haileselassie in 1974.

The other big elephant in the room was the sensitive issue of the country’s religious and lingo-cultural heterogeneity. It would consume the student movement and be articulated famously (or infamously) by Wallelign Mekonnen in his 1969 short essay, “On the Question of Nationalities in Ethiopia.” Heavily influenced by the Leftist interpretation of history, it emphasised and denounced the northern socioeconomic and politico-cultural supremacy.

This article had a huge and lasting impact on the political outlook of the elite in the coming decades. Its legacy can clearly be seen in the current Constitution and federal architecture.

After armed rebels under the Ethiopian People's Revolutionary Democratic Front (EPRDF) took power, they went to great lengths to portray themselves as the champion and guardian of the rights of nations and nationalities. As much as the issue of nations and nationalities garnered a central theme in the struggle of the then political groups, it had its staunch opponents.

They saw a narrative built on a perceived historical struggle between one ethnic group against all others as a recipe for disaster. They also decried federation of regional states along lingo-cultural lines as antithetical to national unity. For them, the demon was class subjugation, and the remedy was class politics. To this day the issue remains controversial, sometimes resulting in heavy human and material cost.

The last issue was democracy. The American Revolution ignited the French Revolution. Constitutionalism and republicanism swept across Europe, disposing despots and emperors. This contagion knocked on the door of this country, albeit late and in a questionable manner. Elections have been held, there are private media, and there is a multiparty system of government. Unfortunately, none of these has been a good match for a determined hegemonic-party system.

In crude generalisation, land, nations and nationalities, and democracy were and are still considered exclusive political causes of the country. Politicians, academics and recently activists still never stray from these three dogmatic blocks. Even with changing times and the needs of the generation, our politics has seldom expanded its horizon.

No doubt, these three core issues are cornerstones of our nation-building, but they are too often found crowding out what is arguably the greatest challenge.

Ethiopia, despite its long history and achievements, is an impoverished country in a very unstable part of the world. It cannot feed its large and growing population. It has one of the lowest scores in health parameters, a mounting debt, and crippling unemployment. About half of the country lacks access to electricity.

But the country’s elite has traditionally avoided such issues in their political discourse. Questions of land, nations and nationalities, and democracy alone cannot be fully answered, and the answers cannot bear meaningful results without lifting people out of dire poverty. No democracy can truly flourish in a country where the youth are uneducated, unemployed and without hope. Nations and nationalities cannot exercise full sovereignty without economic emancipation. Unless population growth is curbed and land is utilised to effect adequate food for the people, land reform will remain meaningless.

This has not been lost on leaders. The administration of the late Prime Minister Meles Zenawi emphasised the developmental state as an economic model. He advocated Asian-style growth, with the government investing heavily on infrastructure to stimulate the economy. The state assumes a leading role in the economy by trying to make up for the void left by a weak private sector.

With Prime Minister Abiy Ahmad (PhD) has come Prosperity Party, which envisions a prosperous country rising out of the ashes through the employ of the private sector. The policy is different but that the alleviation of poverty should be at least as central a goal as the socio-political issues that are the central focuses of the national discourse is clear with both administrations.

Both seem to play the same tune, which is a continual aspect of the same spectrum: development and prosperity. It is the last piece of the jigsaw puzzle. It has to become part of our current political discussion. Political parties can no more hide in the past. These hard and testing questions of the current generation should be raised and should be the yardstick to measure them. 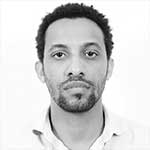 a practising medical doctor with a keen interest in health equity, health economics and current affairs. He can be reached at ephremnk2014@gmail.com.

A TREND TO WATCH  Pay-TV in Ethiopia

BASF Finds in Ethiopia Opportunity to Diversify its Chemical Empire