The concessionaires will invest 4.3 billion Br to explore and extract minerals 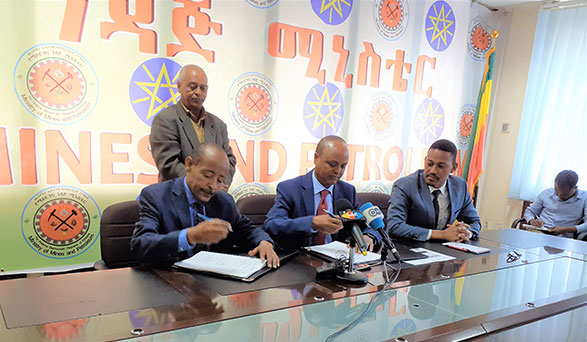 The Ministry of Mines & Petroleum has issued five mining concession licences for four companies with investments valued at a total of 4.3 billion Br. Three of the concessions are for extraction, and two are for exploration.

Samuel Urkato (PhD) and Assefa Kumsa, minister and state minister of Mining & Petroleum, respectively, signed the concessional agreements with the representatives of the respective companies at the premises of the Ministry last week.

The two mining licences were issued for Tigray Resources Incorporated Plc, one of the subsidiary companies of East Africa Metals Incorporated, a company that focuses on exploration and development projects in Africa.

The company will provide job opportunities for 677 permanent local people, while 10pc of the total workforce will be composed of skilled expats with expertise in the field.

Tanarmo Chemical Industrial, a Chinese company, was awarded a 12-year concession to extract 420,000tn of bromine in the Afar Regional State near Afdera Lake with an investment of 57.1 million dollars.

The company has been exploring the mineral for two years and now plans to export to its home country in the form of Hydro Bromine Acid, where it will be reconverted back to bromine.

Best Gypsum Industries, an eight-year-old company owned by Ethiopians and Americans, will invest 2.7 million Br for the exploration of gypsum in Somali Regional State; while GEMROCK Ethiopia Mining, a 15-year-old Indian company operating in Mozambique and Colombia, will explore emeralds in the Gudji Zone of the Oromia Regional State with an investment of 5.2 million Br.

“The government expects effective and timely output from developers,” said Samuel, adding that 20 more concessions will be awarded before the end of this fiscal year. “They have to operate by adhering to the legal framework of the country and without causing significant environmental harm.”

Recently, the Ministry granted concessions to three companies that will invest an aggregate of 31 million Br to explore gold, metals and coal in the Tigray, Amhara and Benshangul-Gumuz regional states.

The initial extraction concessions are for 12 years, which can be renewed for another 10 years as an option after the expiration of the first contract. They are also bound to operate according to the environmental laws and regulations of the country during and after the accomplishment of the mining and exploration activities.

The companies are liable for a 25pc income tax, seven percent royalty fee, five percent government share and land lease payments according to regional laws and regulations once extraction ensues.

The mining industry has exhibited a decline in generating foreign currency for the past few years. It earned 130 million dollars during the 2017/18 fiscal year, less than a quarter of what was earned from the sector seven years ago.

The country earned 39.6 million dollars against the government's estimate of 766.9 dollars in the first nine months of this fiscal year. The nation exported 646.3Kg of gold, 1354.3 cubic metres of marble and 145.7tn of tantalum.

Tensions have also risen between investors and the authorities after 84 mining exploration and extraction licenses were terminated in the Oromia Regional State for allegedly failing to execute their duties properly, pay royalty fees and taxes or create expected employment opportunities.

According to an expert on economic geology for nearly three decades at Addis Abeba University’s School of Earth Science, the Ministry’s effort in boosting investment in the sector is promising.