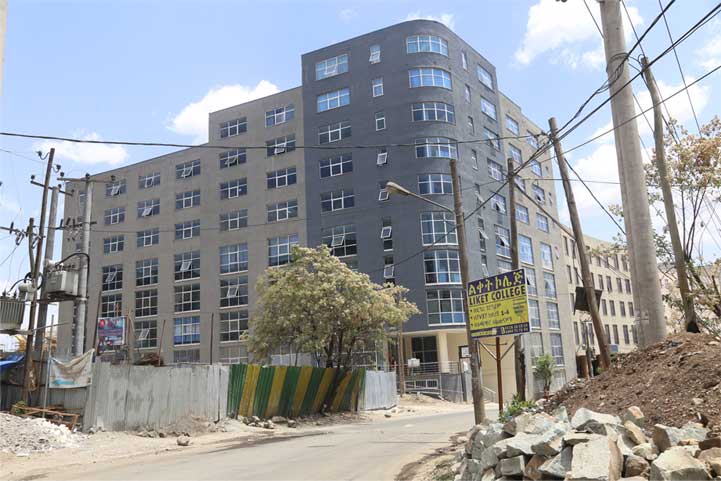 With the main aim of consolidating and governing two recently merged ministries under one roof, the Ministry of Trade & Industry has leased a seven-story building for a 2.65 million Br monthly fee.

Located in Arat Kilo behind the Ministry of Education, the building is owned by Ultimate Plan Plc, a company founded by its managing director Begziabher Alebel (PhD). The building rests on 11,640Sqm of land.

Previously, the then-Ministry of Trade had been operating from a building it rented for 1.5 million Br from the Development Bank of Ethiopia (DBE). At the same time, the then-Ministry of Industry worked at a government building located in Flamingo near National Stadium without paying rent. The two ministries used to occupy a combined 13,000Sqm of land.

When the two ministries merged, the Ministry of Industry moved to the Trade Ministry's building, leaving its building to the Civil Service Commission.

The Ministry, which is responsible for establishing the legal metrological system of the country and coordinating concerned regulatory bodies to enforce standards, was moved to the new office in February 2020.

The move to rent a new building follows the legislation of a law by the Council of Minister's merging the two ministries in October 2018, according to Eshete Assfaw, state minister for the Ministry of Trade & Industry.

After receiving a go-ahead letter from the Public Procurement & Propriety Administration Agency along with guidelines for a lease tender on March 16, 2019, the Ministry established a five-member technical committee to investigate and approve buildings that would be proper for its requirements.

Following the specifications made by the committee, Ultimate Plan, Bloom Tower, Gashaw Assefa Building, Tropical Farmat, TK building, Gorgorios Plc, and Alfoz complex were identified as establishments that meet the qualifications set by the Ministry. The requirements include a parking area, the distance from the former building of the Ministry at Kazanchis, how advanced the construction of the building is, and price, among others.

Even though seven buildings were suggested, only three quoted square metre land prices within the range of requirements, according to Asaminw Teklemariam, finance and procurement director at the Ministry, which is mandated to provide commercial registration, business licensing, and control the use of business licenses for unauthorised purposes.

TK Building and Bloom Tower offered 439 Br and 454 Br a square metre, respectively. In comparison, Ultimate Plan Plc proposed the lowest price of 228 Br. Ultimate, which has 130 employees and provides consulting services on building permit applications and architectural and civil engineering structures, was awarded the contract in June 2019. The two then inked a two-year deal, after the Ministry paid four months rent in advance.

Before deciding to rent the office, the Ministry examined several options, according to Agilachew Addis, director-general of the Office of the Minister.

“The Ministry of Finance doesn't approve more than 300 Br for a square metre of land for rent," he said.

Abraham Seyoum, an economist lecturing at Addis Abeba University (AAU) with over 10 years of experience, believes that the government’s spending on rent is high. He also adds that since the Ministry has been operating with a rental office for years, it should have been thinking of owning its own building.

Abraham says that the government has to construct one or two buildings at least every year to save the ever-growing expense on building rentals.

“Many administrative offices spend a lot of money on infrastructure and furniture apart from paying rent,” he said. "These expenses will affect the economy where the budget can be spent on other important projects."