It will extract the minerals for its under-construction cement plant 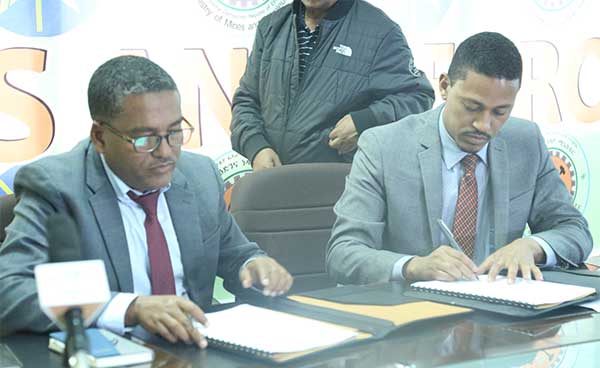 The mining agreement was signed in the presence of Samuel Urkato (PhD), minister of Mines & Petroleum, and Demes Teshager, manager of Abay Industrial Development, at the premises of the Ministry last week.

An economic wing of the Amhara Regional State has secured three mining licenses to extract red soil, limestone and gypsum for an investment of 140.7 million Br.

Abay Industrial Development SC secured a 20-year license from the Ministry of Mines & Petroleum, to source raw materials for its cement plant that is under construction in Eastern Gojam Zone, Dejen Wereda, Amhara Regional State. The construction of the 8.8-billion-Br cement plant was begun in March 2019.

Expected to take two years to be constructed, the plant is expected to create 2,200 jobs and will have the capacity to produce 7,500tn of cement a day. It is also expected to start trial production in 28 months.

The agreement was signed between Samuel Urkato (PhD), minister of Mines & Petroleum and Demes Teshager, manager of Abay Industrial Development, at the premises of the Ministry last week. For the concession, Abay will pay 25pc income tax, a four percent royalty and five percent to the federal government as a shareholder.

Abay, a public-private partnership formed with four billion Birr in registered capital raised from about 516 investors and state-owned enterprises in the Amhara Regional State, has been conducting a feasibility study since 2016 and submitted the findings of the survey to the Ministry, according to Demes.

For the red soil extraction, which will be undertaken at a cost of 17.4 million Br, Abay secured about 1.4 square kilometres of land in Eastern Gojam Zone, Dejen Wereda, Sasa Braye. In the first decade of the license period, the company is expected to extract 5.8 million tonnes of red soil. This project will create jobs for 24 people.

The limestone extraction will be undertaken at a cost of 90.6 million Br and will operate with 59 employees. Covering 3.74 square kilometres of land in Dejen Wereda, Menej and Kurar areas, the site is expected to produce 21.1 million tonnes of limestone in the first decade of the concession.

Abay is expected to start development work within 60 days and extraction in two years, according to Beamlak Alemayehu, director of legal affairs at the Ministry, which operates with 370 employees.

So far, the Ministry has issued a total of 13 licenses in this new fiscal year. In the last fiscal year, it had issued 24 mining licenses out of the requested 60, a record high. Out of the total licenses, 19 were for exploration, while the remaining five were for extraction. The concessionaires will invest a total of 4.9 billion Br and create 1,200 jobs when they become fully operational.

However, the sector has been suffering for the past couple of years. Export revenue has been significantly falling. Six years ago, the export of mineral products generated 650 million dollars; however, it dropped to 49 million dollars in the last fiscal year.

To rescue the ever declining revenues from the sector, the Ministry formed a National Steering Committee recently. The 12-member committee is composed of experts from the Ethiopian Geological Survey, Mining, Oil & Biofuel Corporation and the Ministry and is tasked with assessing the problems of the sector and suggesting policy reforms to the industry.

Last month the Ministry digitised the license issuance process that enables companies in the mining sector to communicate and interface directly with the Ministry. The Prime Minister also allowed foreign oil and gas exploration and development companies to open an offshore or a foreign bank account.

Currently, there are a total of 208 businesses with licenses to engage in the mining sector, while the industry provides livelihoods for 177,000 people who are involved in artisanal mining and 2,000 people employed formally by mining companies.

Ayenachew Alemayhou, department head of geology under the School of Earth Sciences at Bahir Dar University, recommends the company rehabilitate the area after the concession has expired.

"It has to rehabilitate the site to conserve the environment," said Ayenachew.

Ayenachew also says the mining sector of the country is struggling against the backdrop of the contraband trade and a lack of trained human resources.

"The industry operators should use appropriate technology," he said, "to reap the fruit of their investment properly."