The company will use students as its labor force 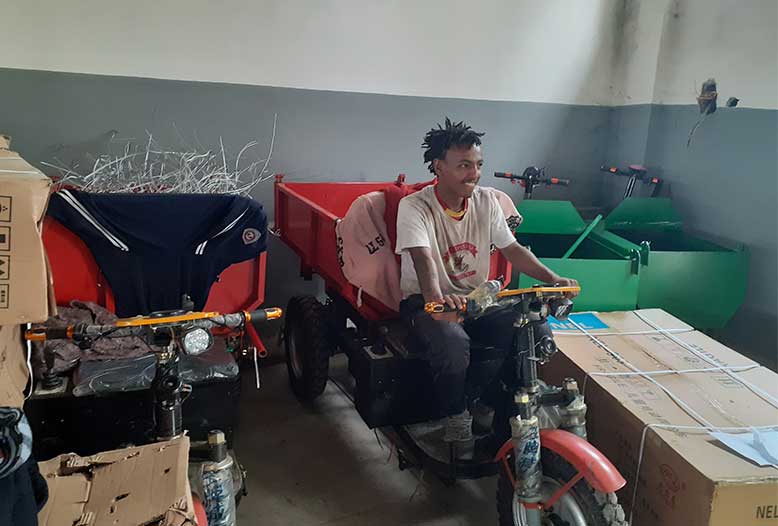 The plant was opened on the premises of the Addis Abeba City Administration's Technical & Vocational Training Bureau, Nifas Silk Poly Technic College, and Tom Renewable plans to eventually assemble around 40 types of electric motor vehicles there.

The electric vehicles can go up to 40Km/h and are charged using standard 220v electric outlets. The vehicles take between four and six hours to get fully charged and can travel up to 60Km on one charge.

The company imports spare parts from China and sells electric bikes for around 35,000 Br, while a three-wheel electric motor vehicle has a price tag of approximately 65,000 Br.

Tom also sells a range of other electric engines such as motorcycles for the disabled, load carriers, trolley box carts, and construction and farming motor vehicles starting from 1,250 Br.

The company entered into a public-private-partnership agreement with the Nifas Silk Poly Technic College on June 19, 2019, that allowed it to open its production plant in one of the buildings located inside the College.

The company first opened its assembly plant in Gerji, Bole District, where it assembled the first prototypes. A few months ago, the company was able to land an agreement with the College after having talks with a few of the colleges in the city.

According to the agreement, Tom will provide training to students in their last year of education. The company will also hire at least 50pc of the graduates of the auto mechanic department every year. The department currently has around 1,200 students.

In addition, from every electric motorcycle sold, the college gets 200 Br to cover utility costs, while the undergraduate students will be working at the plant for free.

“Our major goal is not earning money," said Meles Yigzaw, dean of Nifas Silk Poly Technic College. “The greatest benefit we can get from this project is providing practical learning to our students while securing jobs for them when they graduate.”

“In addition to being employees, we can see our students opening shops that sell the vehicles and establishing maintenance workshops,” added Meles.

The contract that was signed between the two also does not have a time-lapse and “will keep being in force as long as the operations of the company are in line with the vision of the college,” reads the contract.

In its first year of production, the company plans to sell between 15,000 to 20,000 of its products. Though the company expects penetrating the market will be challenging, they still believe they will be able to triple production in three years.

The company sent three of its engineers to China where they received a three-month-long training about the production and assembling of the vehicles. The trainees have in turn trained 20 employees of the company in Ethiopia and will also be instructors at the College.

“Though Tom was first opened around five years ago, it had been facing challenges in launching its product,” said Tomas Gebremesql, owner of the company.

“From problems at customs on how to tax the spare parts to delays at the Federal Transport Authority to getting licences, it all held up our plans,” added Tomas.

Tomas, who also owns Tom Advanced Renal Care, a company that gives dialysis services, is a health professional who has returned back home after living abroad for several years. The idea for the electric car was first conceived when he was travelling to China to import raw materials for his dialysis service.

The company first opened its assembly plant in Gerji, Bole District, where it assembled the first prototypes. A few months ago, the company was able to land an agreement with the College after having talks with a few of the colleges in the city.

Nifas Silk first opened its doors in 1964 as an elementary school. It then went through various transformations until it received its current status as a polytechnic college in 2010.  It teaches level one up to level four courses in 11 departments and has around 5,400 students.

“We are currently in negotiations with other companies so that they will open their factories inside the college,” said Meles.

There are around 970,000 vehicles in the country with 60pc of them concentrated in the capital.

Ethiopia spends around three billion dollars annually to import fuel, and that budget has been growing at a rate of 10pc per year. The same rate of growth as the number of vehicles in the country.

Experts in the area commend the operations of the company as well as its partnership with a college.

“From the reduction of the fuel consumption to the contribution to the green economy such efforts should be followed by other companies, while the state should provide tax incentives," said Eshete Berahnu, an associate professor at Addis Abeba Institute of Technology's School of Mechanical & Industrial Engineering.

The company should work on scaling up its production to an industrial level,  Eshete added.