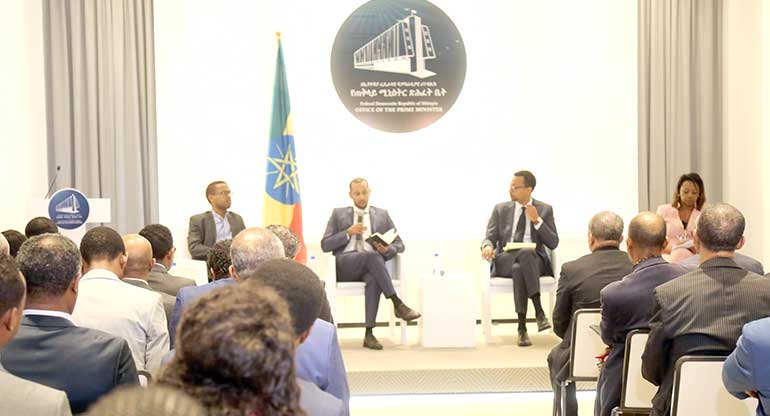 With the main aim of addressing economic imbalances and sustaining growth, a team of experts under the Office of the Prime Minister drafted a three-year economic reform programme.

The reform, which is expected to be implemented in the coming weeks, aims at stimulating the country’s economy, ensuring sustainable development, reducing unemployment, maintaining macroeconomic stability and transforming the economy from state-led to private sector-led.

"It is designed in response to our needs, as well as the problems and inefficiencies of the economy," Mamo Mihretu, senior advisor to the Prime Minister and the country's chief trade negotiator, told Fortune.

The reform identified five major problems in the economy and targets how to address them. Unemployment, inflationary pressure, foreign currency crunch, debt stress and credit problems are the major challenges spotted by the document.

The programme targets to address these problems in three dimensions via macroeconomic, structural and sectoral reforms. Under the macroeconomic overhaul, the programme outlines implementing conservative fiscal policy; reforming the state-owned enterprises; increasing foreign currency earnings; controlling inflationary pressure; and ensuring the healthiness of the financial sector.

Structural reform will focus on creating a conducive investment climate by revising and amending legal frameworks, administrative procedures and policies. It also considers reforming the logistics, power and telecommunications sectors.

Under the sectoral reform, the document calls for accelerating productive sectors to be more effective. Assisting the agricultural and manufacturing industries to create more jobs and exploiting the industries that were not productive previously, are the critical areas of the sectoral reform. It picked mining and tourism as the areas that can potentially create jobs and generate foreign currency.

It also pinpoints the ICT and creative industries as a new source of growth and requires special attention in the reform.

Getachew Asfaw, an economist who has a track record of publishing a couple of books on the macroeconomic conditions of Ethiopia, appreciate the new initiative from the government in starting talks on macroeconomic issues.

"The economy was under the shadow of the politics," Getachew told Fortune. "This is a time when the country needs radical reform."

For the implementation of the programme, a National Reform Committee has already been formed and consists of members from the National Bank of Ethiopia, the Office of the Prime Minister and the Ministry of Finance.

"Subcommittees will also be formed based on the nature of the reform," Mamo said. "What differs from the previous efforts is that it is explicit and specific."

Before implementing the reforms, the draft programme will be tabled for public and stakeholder consultation in the coming weeks, according to Mamo.

"The consultation forum will help us ensure transparency and get feedback on the areas we skipped or overlooked during the drafting process," Mamo told Fortune.

However, Getachew does not agree with the approach the team followed in drafting the reform programme, saying the document should have been prepared in collaboration with experts.

"Rather than inviting experts to comment on the drafted document," said Getachew, "it could have been good if the team took input from experts first and then drafted the document."

Along with this document, over the past couple of months, the government has been launching new projects that are believed to address the challenges in the economy. Six months ago, the Office of the Prime Minister formed a high-level committee that will be tasked with reforming the ease of doing business and making it favourable for foreign direct investment.

As an add-on to the ease of doing business committee, the Prime Minister Office has formed another committee that will be working on attracting foreign direct investment to the country and creating three million jobs in the current fiscal year. The committee, which became operational two weeks ago, targets to generate 1.1 million jobs in the industrial sector, one million in agriculture and the remaining 950,000 in the service sector.

Getachew cautions the government to take extra care while implementing these reforms.

"The outcomes of the reforms shouldn't be inflationary or burden the economy," he said. "Thus, the government should be prudent."

A Place to Call Home

It's Never Too Late to Restart Ethiopia's Politics, Economic Circumstances