Value of a dollar is increasing by 10 cents every day 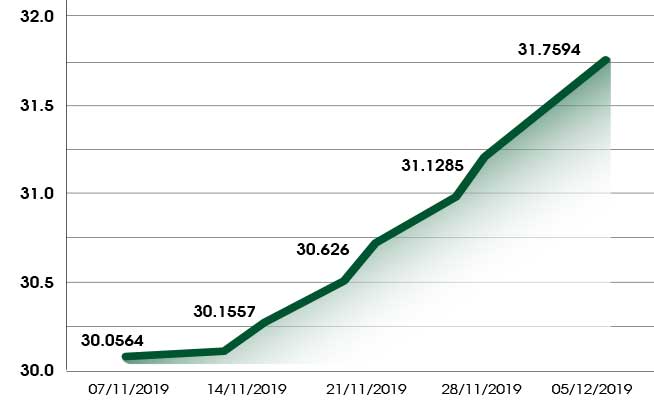 Suddenly on November 14, 2019, and each successive day since, however, the dollar could now buy 0.1 Br more – or about 10 times the previous guided devaluation level.

The big news of November 14, 2019, that was covered by every media outlet was a meeting that was held between Prime Minister Abiy Ahmed (PhD) with opposition party leaders from the Amhara and Oromia regional state, who failed to see eye to eye. The meeting aimed at calming the tensions between the parties.

However, there was another development in the economy that was not covered by any media outlets. The National Bank of Ethiopia’s (NBE) launch of a stealth campaign to devalue the currency without making any announcement to the public.

The policy has continued for more than three weeks now, with the Birr falling by 5.6pc against the United States dollar, which it is pegged to, since November 13. Over that 25-day period, the Birr fell from 30.08 Br against a dollar to the figure on Saturday, December 7, 2019, of 31.76 Br a dollar.

To put this in perspective, throughout October and early November, the transaction selling rate released on a nearly daily basis by the Commercial Bank of Ethiopia (CBE) rose by 0.02pc for the dollar, meaning that each day that passed, the dollar would buy about 0.01 Br more than it did the previous day.

Suddenly on November 14, 2019, and each successive day since, however, the dollar could now buy 0.1 Br more – or about 10 times the previous guided devaluation level.

Though the NBE has not announced any particular reason for the current silent and unusual trend in the foreign exchange rate devaluation, the local currency has continued devaluing by approximately 0.3pc every business day.

Representatives from the NBE, CBE and the Ministry of Finance did not respond to questions from Fortune.

The last time the government made a sudden devaluation move happened in 2017 when the Birr fell from 23.4 to 26.9, a 15pc devaluation. At that time, the NBE stated that the reason behind the devaluation of the Birr was to control inflationary pressure and prop up export earnings.

Devaluation and its impact on exports may be positive over the longer term, but it needs to be supported by complementary measures that are designed to tackle structural and institutional bottlenecks, according to Getachew Woldie (PhD), an economist with 15 years of experience who works and lives in Canada.

“This devaluation will have contractionary effects on key macroeconomic indicators such as real GDP, investment, government and private consumption,” said Getachew.

Economists generally agree that a weak domestic currency makes a nation's exports more competitive in global markets and simultaneously makes imports more expensive. This policy then, in a textbook sense, would intend to bring in more foreign currency by improving exports.

“The domestic currency cost of imported intermediate and final goods, which are denominated in foreign currency, could also explain the contractionary effects of the policy,” Getachew countered. “But Ethiopia’s dependence on imports and lack of domestic substitution, at least over the short run, would likely lead to an increase in costs to businesses and increased prices to consumers.”

Alemayehu Geda (Prof.), a macroeconomist and a university lecturer, registered similar sentiments to those of Getachew in a tweet last week: “Stop the current creeping devaluation [because] a 10pc devaluation leads to 20pc inflation, without improving exports.”

Private business actors are complaining about the shortage of foreign exchange and worry about the devaluation’s effect on the forex crunch.

“We're facing a critical problem” said Dawit Ethiopia, a local importer. “Market loss, supplier loss, less profitability, loss of customers and employee layoffs are among the problems we are facing due to this shortage.”

On the other hand, Berhan Bisrat, CEO of JB Construction, said though the shortage of forex was affecting his business, he generally supported a free-floating exchange rate.

With a free-floating exchange rate, the official rate would be expected to move toward the rate in the parallel market that hovers in the vicinity of 40 Br to a dollar.

“The value of a dollar is increasing by 10 cents every day in the past two weeks,” said Abiy Belayneh, loan and trade finance manager at United Bank. “That causes exporters to hold their export documents and bring it to the Bank only when the rate gets even higher.”

There is no clear implication why the NBE chose to devalue the Birr by this rate, but Getachew has his theories. “There have been calls from the International Monetary Fund and the World Bank that Ethiopia’s currency is overvalued and pos[es] risks on competitiveness and exports,” he said.

“Ethiopia’s central bank has been resisting calls, but [it] seems it finally surrendered to demands from the IMF and the World Bank,” he added.