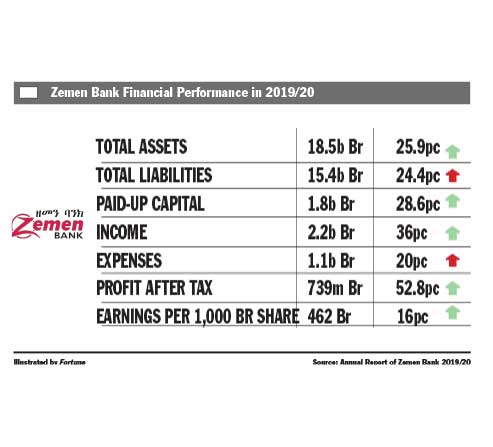 The massive surge in profit after tax helped Zemen’s earnings per share (EPS) to rise by 64 Br to 462 Br.

The massive surge in profit after tax helped Zemen’s earnings per share (EPS) to rise by 64 Br to 462 Br. The EPS grew significantly even though the paid-up capital of the Bank expanded considerably to 1.8 billion Br, a 28.6pc jump.

The impressive performance of Zemen must have been good news to its shareholders, according to Abdulmenan Mohammed, a financial statement analyst based in London, the United Kingdom.

Daniel Abebe, a founding shareholder at Zemen, is already excited by the performance of the Bank. At the beginning of the year, Daniel had a fear that the Bank would not register satisfactory growth, mentioning his reservations about one of the directors he believed should not have been included on the board.

"But it didn't happen," he said. "The board directors and the management did well in dragging the Bank away from slower growth."

Daniel adds that even though Zemen started making a profit in its first year of operations, its decent performance did not last for more than three years, and it has been struggling over the past couple of years.

One of the things that helped Zemen to recover, according to him, was resolving the issue related to the bankrupted Holland Cars, a local car assembly company. Zemen, the major lender for Holland, has been in a court battle to recover loans it gave to the company.

The massive growth of revenues, which is not matched by the growth in expenses, led to a remarkable increase in profit after tax, according to Abdulmenan.

Interest on loans, advances and National Bank of Ethiopia (NBE) bonds increased by 44.6pc to 1.5 billion Br, while income from fees and commissions swelled by 21pc to 539.5 million Br. Income from foreign exchange dealings also went up by 12.9pc to 126.2 million Br, making Zemen one of the few banks that had positive results in forex dealings. Most banks reported a loss from this line of business over the reporting period.

At the end of the last fiscal year, Zemen’s workforce grew to a total of 998 employees, who work at 52 branches across the country. Last year, the private banking industry underwent a considerable branch network expansion, increasing the total number by 714 to 4,593.

Even though Zemen started with a single branch concept, it currently operates with multiple branches, according to Daniel, who doubled his shares over the past 12 years.

“As long as it’s profitable, it doesn't matter,” he said.

Zemen’s outstanding loans and advances stood at 9.7 billion Br in the last fiscal year, increasing by 27.6pc. Its total deposits reached 14.4 billion Br, a 24pc rise. The loan-to-deposit ratio of Zemen increased to 67.4pc from 65pc.

"Despite this increase, the loan-to-deposit ratio of Zemen is lower than that of many banks," said Abdulmenan. "It seems that Zemen has some room to increase the ratio."

The provision for the impairment of loans and other assets rose by 1,177pc to 5.6 million Br.

The management should be appreciated for keeping this provision at such a low level, according to Abdulmenan.

The liquidity level of Zemen is higher than many of the banks, according to the expert.

"Zemen needs to utilise its higher level of liquidity for profit-generating activities such as extending more loans," recommended Abdulmenan.

Zemen has capital and non-distributable reserves of 2.6 billion Br and a capital adequacy ratio (CAR) of 26.5pc.

This shows that Zemen had a solid capital base, which should be used efficiently, according to Abdulmenan.

Zemen achieved a remarkable performance last year despite all the challenges it faced, according to Abebe Dinku (Prof.), the board chairperson of Zemen.

Abebe stated that Zemen had started the year with a positive global and domestic economic outlook until the outbreak of the Novel Coronavirus (COVID-19) pandemic at the end of the second quarter of the last fiscal year.

"The pandemic has had a more severe impact on the performance of the banking industry,’’ he said. "It's resulted in slowing economic activities, rising costs, increasing non-performing loans and health and safety concerns among customers and employees.’’