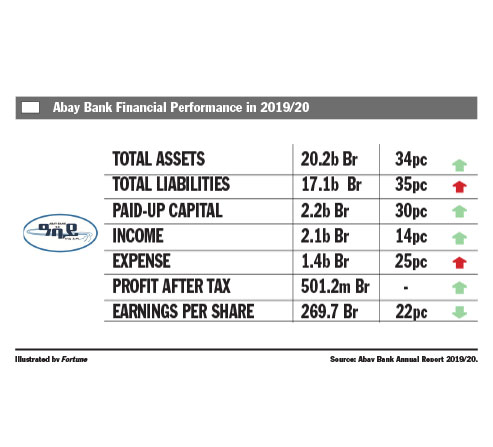 It was not a gratifying year for the shareholders of Abay Bank, which fell short of repeating the impressive performances it had been exhibiting for the better part of its decade in operation. Abay’s net profit for the last fiscal year remained stagnant, in stark contrast to the average industry growth rate of 33pc recorded in the year 2018/19.

Earnings per share (EPS) went down by 21.5pc to 269.66 Br. The main culprits behind such slack figures are stagnant profit at a little over half a billion Birr, coupled with the injection of fresh capital.

This must have been a disappointment to the shareholders, said Abdulmenan Mohammed, a financial statement analyst based in London.

It was a grim reality captured by Ethiopia Tadesse, board chairperson of Abay Bank.

"The year under review was marked by significant global and domestic developments which impacted our business in several ways," reads her statement published in the Bank's annual report.

Yehuala Gessesse, president of the Bank, attributes the challenging year to the pandemic, shortages in foreign currency, and surging inflation last year.

However, the Bank did attend decent growth in income, only to see it nullified by a spike in expenses, leading to the static performance. Interest on loans, advances and bonds bought from the central bank increased by 36.5pc to just over 1.5 billion Br, while income from service charges and commissions went down by 19pc to 418.54 million Br; a development that Abdulmenan characterised as "shocking."

Much like others in the industry, Abay's gains on foreign exchange dealings plummeted over the last fiscal year. It saw a sharp drop of 62.6pc to 47.88 million Br.

It is time for the management of the Bank to thoroughly examine its competitive position in these areas of business and come up with a strategy to reverse such free fall, according to Abdulmenan. He did, however, recognise Abay for having a good credit management system, which he advises the Bank to capitalise on.

The Bank's provision for securing sick loans and other assets went down by almost half to 28 million Br, while total assets increased considerably to 20.2 billion Br. Abay disbursed loans and advances of 11.61 billion Br, an increase of 53pc, and mobilised deposits of 16.1 billion Br, a growth of 38.8pc. Its loan-to-deposit ratio increased to 72.1pc from 65.5pc, a "remarkable" figure, according to Abdulmenan.

Abay invested 2.71 billion Br in the central bank's five-year bonds, which account for 13.4pc of the Bank's total assets and 16.8pc of its total deposits.

The Bank also opened 31 new branches over the reporting period, bringing its total branch network up to 223.

Abay increased its paid-up capital by 30pc to 2.17 billion Br. It has a capital adequacy (CAR) ratio of 23.9pc, which is about the same ratio for the banking industry at large.

"Abay has strong capital and huge liquid resources; it should use these to earn more income," said Abdulmenan.

The Bank's returns have been unsatisfactory to Bereket Haile, who acquired shares for 60,000 Br two years ago, becoming one of the over 4,000 shareholders. He believes it is better to invest than to hold on to money, in light of the country's growing inflation, hovering at 20pc of an annual moving average. He is confident that Abay can make a comeback.

"I increased my shares recently," he told Fortune. "I know the stagnation in performance is temporary."