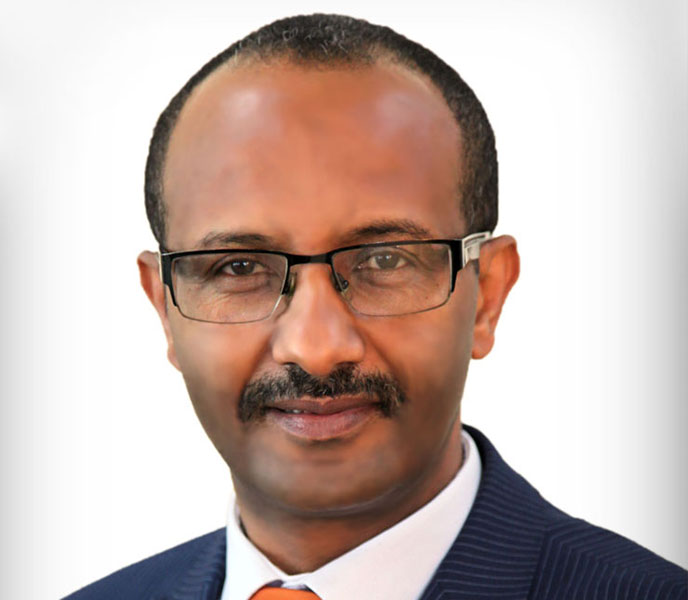 Aklilu Wubet, 48, has won the approval of regulators at the central bank to take the helm at Wegagen Bank as its seventh president since its foundation.

Serving as acting president following the resignation of Birtukan Gebreegzi a year ago, he is faced with the arduous task of reversing the massive profit slide the Bank faced last year. The 25-year-old Bank saw its profits plummet to 126 million Br, leading earnings per share (EPS) to drop to 4.2pc from 31.3pc. The Bank's 4,000 shareholders will be looking to Aklilu to pick dividends back up and restore Wegagen to its former reputation as a mid-tier bank.

A native of Addis Abeba, Aklilu studied economics and public management before focusing on development business for a postgraduate credential from Addis Abeba University (AAU). He is enrolled on a doctorate programme in banking systems at the AAU. A father of three, Aklilu has 25 years of experience at various financial institutions, beginning his climb up the corporate ladder as a junior banker at the state-owned Commercial Bank of Ethiopia (CBE). He had stayed with the CBE for seven years.

Aklilu became a branch manager at Wegagen Bank in 2005. A year later, he joined the Bank of Abyssinia (BoA), where he rose through the ranks to become vice president for corporate services. He oversaw five departments, including IT, e-banking, and credit services, over his decade-long stint at BoA. Beyond the banking industry, Akiliu has also served as vice president of Nile Insurance Company.

He taught economics and accounting at AAU, Royal University College and Unity University before he rejoined Wegagen Bank as vice president for corporate service in March 2021. He has been serving as acting president for the last six months.

Contrary to Wegagen’s history of recruiting its presidents from outside, the board of directors chose to draft from among its top executives this time around. Two other candidates had competed to get the top job. The screening process took 20 days, according to Abdishu Hussien, chairperson of Wegagen Bank. The board of directors credited Aklilu for helping the firm survive the crisis of the pandemic and the civil war.

“Aklilu has demonstrated he has what it takes to return the bank to its former glory,” said Abdishu. “We expect a top-notch performance in every aspect of our operations."

The board expects Aklilu and his team to deliver growth, including deftly handling the many challenges Wegagen faces.

Aklilu is well aware of the dire situation the Bank finds itself. Wegagen has taken a larger casualty from the war in the north. Over a quarter of the Bank's 398 branches are in Tigray, cut off from the rest of the country since November 2020. The closure of branches in Tigray put pressure on Wegagen's deposit mobilisation. It increased by only five percent to 31.5 billion Br, a stark contrast to the industry's 25pc growth to an aggregate deposit of 1.3 trillion Br last year.

Aklilu says Wegagen is not considering a branch network expansion to compensate for the losses in the north. He is bullish about Wegagen's prospects and has already set out plans to set the Bank back on the growth track.

“It's not something the Bank can't overcome,” he told Fortune. "My first goal is to reclaim the unpaid loans the Bank disbursed last year."

The Bank maintained provisions for the impairment of loans and other assets of 879 million Br last year, a massive jump of 71pc. This had a profound effect on its profitability.

The President also plans to lure the Bank’s former customers back.

“The Bank has already established a separate department staffed with the necessary manpower for this purpose," he said.

Six years ago, Wegagen was standing shoulder to shoulder with first generation private banks such as Awash, Abyssinia and Dashen. It was among the top three most profitable banks in 2016/17, surpassing the one billion Birr mark in gross profits.

However, the road to reclaiming its pre-crisis distinction will be daunting. Meeting the central bank's minimum capital threshold is among the challenges. The central bank has increased the minimum paid-up capital threshold for banks 10-fold to five billion Birr. Banks such as Wegagen, which was incorporated in 1997, must comply with the requirement by the end of 2026. An injection of 400 million Br brought Wegagen's paid-up capital to 3.3 billion Br by the end of last year.

“The Bank has dedicated shareholders who are willing to reinvest their dividends,” said the President.

Wegagen has been floating shares to the public, reducing the premium to five percent from 20pc to attract buyers.

Yet, the banking industry has become a much tougher arena. As more players join, Wegagen faces fierce competition to raise equity from new entrants as well as other mid-tier banks and deeper-pocketed financial institutions.

“I ask citizens to be patient and calm.”
Share this...