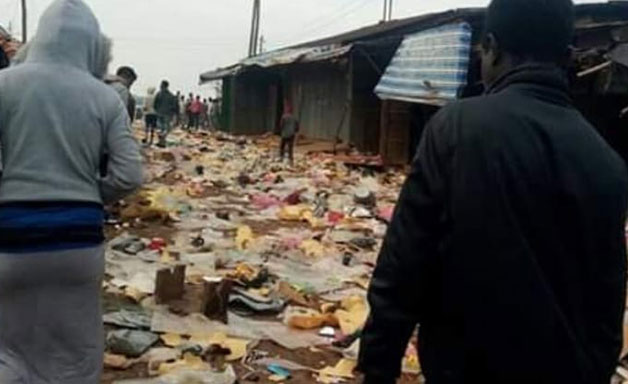 Heavier clashes on the outskirts of the city and nearby towns took place, and there were reported cases of property damage and looting.

Businesses and government institutions in Hawassa closed their doors following a dispute that arose after an announcement recognised Sidama as the 10th regional state.

Some shops began closing their doors in the afternoon of Wednesday, July 17, 2019, and others started to join on Thursday morning, the same day organised youth groups went around the city holding celebratory signs before they were dispersed by the military, according to residents in the area.

The youth then were seen barricading roads in the city to which the armed forces responded by firing tear gas to disperse them. Gunshots were also heard around the city, according to eyewitnesses.

The military was also seen stopping motor vehicles and confiscating motorcycles, according to eyewitnesses.

However, there were heavier clashes on the outskirts of the city and nearby towns, and there were reported cases of property damage and looting. There were serious clashes in the nearby regions of Agere Selam, Yirgalem, Wendogenet and Aleta Wondo, according to sources.

"The municipality of Tulu city, as well as its finance bureau were looted and destroyed," a city resident told Fortune.

Many people with major injuries were coming from nearby weredas, an intern at Hawassa Referral Hospital told Fortune.

"There have been some fatalities and people suspected of participating in the violence were being arrested," Tewdros Weldemichael, police commissioner of Southern Nations, Nationalities and Peoples' Regional State Police, told the state-affiliated Fana Broadcasting Corporate on Friday.

Mobile data and internet connections have also been disconnected in the city since last Thursday.

Tensions in the area began earlier in the week following the announcement that a self-declared 10th regional state would come into existence on July 16, 2019.

The Sidama Zone, the largest ethnic group in the southern region, has been calling for statehood for months.

The questions of Sidama Zone arises from the constitution as it gives all nations, nationalities and people the right to have their own region and mandates a referendum to decide the issue, according to Christophe Van Der Beken (PhD), a constitutional law lecturer at Addis Abeba University's School of Law & Governance.

Following legal procedures, the question of statehood was approved by the zonal council about a year ago and a formal request was submitted to the regional council to conduct the referendum.

The constitution also states that the Council that received the demand has to organise a referendum within one year to be held for the nation, nationality or people that made the demand.

"The National Election Board came into the picture as the electoral law empowers the institution to hold referendums," added Christophe.

As the one-year ultimatum was coming to an end and the question of statehood was not addressed, the Zone earlier this week self-declared regional statehood to be effective on July 18, 2019.

On July 16, 2019, the National Election Board of Ethiopia (NEBE) came with a response. The Board recognized that it received an application for Sidama statehood on November 2018 but was unable to respond to it earlier as the institution had been undertaking major legal and administrative reform, including the selection of new board members.

It also assured that the referendum will take place within the next five months once the logistical, administrative and security arrangements are finalised.

The response of the Board was accepted by those responsible for the declaration and said they would wait for the five-month period.

The legal expert believes that Sidama did the right thing in submitting the request to the regional council and counting the period from that time.

However, citing electoral law, he argues that the next step by the Sidama Regional Zone should have been to lodge their question with the House of the Federation, which is supposed to reply within a two-year period.

"But the law stops there, and there are no further procedures that deal with the issue," he added

Christophe believes that the problem at hand arose out of the vagueness and  lack of clarity of the law.

"The question of the statehood of Sidama is neither unprecedented nor has clear legal guidelines that govern the issue," said Christophe.

He suggests the enactment of a detailed law that governs the issues of administrative demarcation, division of property and protection of minority rights, as well as provisions that address voting procedures.

Some believe that the crisis could have been much worse and larger-scale violence was averted by the agreement  to delay declaring their own region and accept a government offer to hold a referendum in five months.

Some businesses reopened their doors in some areas of the city like Piassa, Aroge Menaheria and Tebor, where normalcy returned by late Saturday, according to residents of the city.

"It’s getting calmer and things are returning to normal," a café owner in Hawassa told Fortune.

The Elephant in the Room: Conflict and Violence

The Root of Violence

Violence Turns Investments in Regional Towns into Ash
Share this...