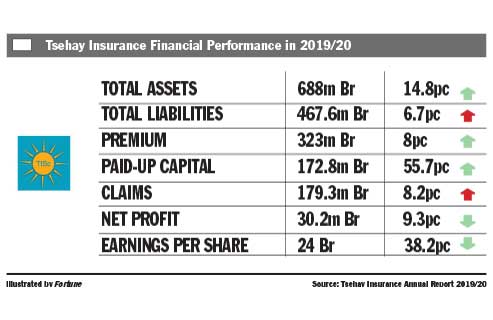 Tsehay Insurance, one of the youngest insurance firms, faced a profit slump over the past fiscal year. The firm netted 30.2 million Br in profit, a 9.3pc decline from the previous year.

Its earnings per share (EPS) also registered a notable decline of 38.2pc to 24 Br. Last year's EPS was 35pc lower than the level that was recorded two years ago.

The higher claims level the firm paid last year and the massive growth of paid-up capital undermined both the profit and the EPS of the eight-year-old insurance firm. Despite the rise in claims, Tsehay achieved a modest performance in investment activities, raised its paid-up capital and recorded a growth in underwriting surplus.

Last year was clearly a period of economic recession and social disruption that engulfed the world due to the effects of the Novel Coronavirus (COVID-19), according to Mandefro Erkou, board chairperson of Tsehay.

Ethiopia faced more problems due to the slowdown of foreign direct investment, including an acute shortage of foreign currency, a decline in construction activities and political unrest, which has continued for more than a decade, affecting the growth momentum, according to him.

The underwriting surplus of the firm increased by 18pc to 28.3 million Br. During the year, Tsehay’s gross premium went up by eight percent to 323 million Br. Out of this total, the firm ceded 16.8pc. The retention rate increased to 83.2 percent from the previous year’s rate of 73pc.

The retention rate of the firm increased considerably, according to Abdulmenan Mohammed, a financial statement analysis working at London-based Portobello Group as an accounts manager.

This might have been the cause of the increased claims, remarked Abdulmenan.

In the past fiscal year, Tsehay's claims paid and provided for went up by 8.2pc to 179.3 million Br.

The increased claims level undermined the other areas of business that performed well, according to Abdulmenan.

"The management needs to pay attention to claims," said Abdulmenan.

The major contributing factor for such an increment [in claims] was the continuous rise in motor accidents coupled with a continuous escalation of spare parts and labour costs, according to Mandefro.

Interest and dividend income showed surges of 17pc and 25pc to 26.3 million Br and 8.5 million Br, respectively. Tsehay invested in Hibret, Abyssinia and Berhan banks, as well as Ethio-Reinsurance.

This indicates that the management of Tsehay did well in investment activities, according to Abdulmenan.

The increase is reasonable, according to Abdulmenan.

The total assets of Tsehay expanded by 14.8pc to 688 million Br. The investment in shares, government securities and time deposits accounted for 45.6pc of its total assets.

The paid-up capital of Tsehay increased massively by 55.7pc to 172.8 million Br. During the reporting period, the insurance industry's total capital reached 9.7 billion Br, a 17.9pc increase from the previous year.

Sovereignty Claims Bear the Responsibility to Protect. Where's the UN?

Profit Edges up Slightly at Oromia Bank, While Earnings per Share Tank