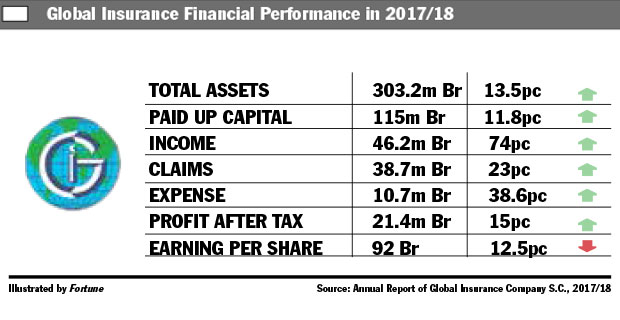 Global Insurance Company improved its profit bottom line to 21.4 million Br, a 15pc increase from the previous year. However, its earnings per share (EPS) fell to 98 Br from last year’s 112 Br.

Global Insurance Company improved its profit bottom line to 21.4 million Br, a 15pc increase from the previous year. However, its earnings per share (EPS) fell to 98 Br from last year’s 112 Br.

A massive capitalisation was mainly attributed to the reduction in EPS.

The company increased its capital from 70 million Br to 115 million Br in the past four years, meeting its goal for this year. During their annual gathering, shareholders agreed to increase the paid-up capital to 250 million in the coming years.

But for the newly appointed president, Tibebe Tesfaye, who had been deputy CEO of Tsehaye Insurance before assuming his current post, the decline of the return has been due to limited sale volume. Tibebe, a career insurer with an MBA, has been in the industry for close to two decades.

"We have to work more to expand our business," Tibebe told Fortune. "That way we can boost our earnings."

A considerable reduction in claims paid was the primary driver of the increase in profit. Claims reported by the company dropped by 23.4pc to 38.7 million Br.

"We have been working on controlling claim leakage," argued Tibebe. "We will continue implementing prudent underwriting."

The company formed an internal committee to control the claims.

Global boosted its investment activity in the reporting year, generating income from interests that surged by 24.4pc to 12 million Br.

The income from rental services went up by 17pc to 10 million Br.

With the increase in income, Global's expenses have increased. The salaries and benefits of the 254 employees and its administration costs reached 21 million Br, an increase of 41pc, while advertising costs doubled to 1.3 million Br.

"We implemented a salary adjustment in the period," argues Tibebe. "This is the main reason for the surge in administration cost."

Experts suggest that cost control systems be established by the Insurer.

"Global should have a strong cost-controlling mechanism," suggests Abdulmenan Mohammed, a financial expert based at the London Portobelo Group Limited.

The proportion of savings and investment to total assets declined by four percentage points to 38.3pc. On the other hand, cash and cash equivalents increased by 43pc to 42 million Br.

"This reveals Global was maintaining excesses liquid cash that could have been invested," argued Abdulmenan.

The executives at the insurer accept the expert's comment. Global is eyeing an aggressive business expansion to curb the high liquidity of the company.

"We have enough liquid resources," Tibebe said. "We now have created a strategy that can bring a major corporate shift and boost our market share."

Global has raised its paid-up capital by 11.8pc to 115 million Br in the reporting period. Its capital and non-distributable reserves increased by 43pc.

"The Company should stop boosting its capital and work toward expanding the business," Abdulmenan suggested.

The new president accepts the suggestion.

"We need to expand our outlets and intermediaries with a prudent operation to maximize our revenue," Tibebe told Fortune. "Also, we will be cautious of our costs."

Independent Insurance Regulator Can Do Wonders for Industry