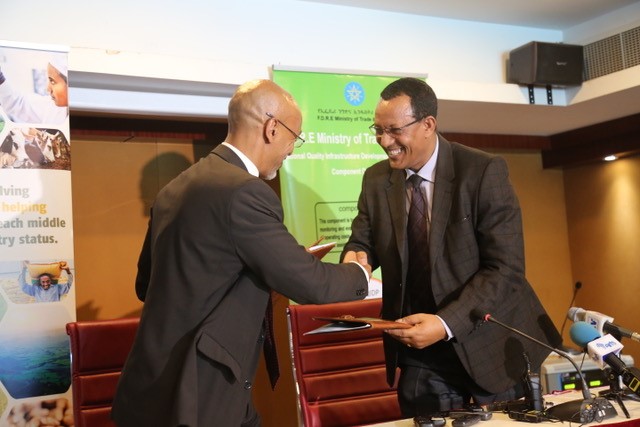 For the project, the Agricultural Transformation Agency (ATA) has signed a memorandum of understanding (MoU) with the Ministry of Trade & Industry. Khalid Bomba, CEO of ATA, and Eshete Asfaw, state minister for Trade & Industry signed the agreement on June 20, 2019.

The government has started an effort to establish and upgrade internationally accredited quality testing laboratories for honey with the main aim of boosting revenue from export of the product.

For the project, the Agricultural Transformation Agency (ATA) has signed a memorandum of understanding (MoU) with the Ministry of Trade & Industry. Khalid Bomba, CEO of ATA, and Eshete Asfaw, state minister for Trade & Industry signed the agreement on June 20, 2019.

The agreement seeks to establish a partnership framework where financial and technical support will be provided to two selected private and public enterprises to develop quality testing laboratories. Laboratories of the Ethiopian Conformity Assessment Enterprise and Bless Agri-Food Laboratory Service Plc are the beneficiaries of the project.

The project, which will be implemented through ATA’s Ethiopian Agribusiness Accelerated Platform, will see the allocation of 404,000 dollars for the purchase and maintenance of lab equipment for the two labs, which are expected to be operational next year.

The support also extends training and capacity building for employees, as well as commercialisation support  and brand and reputation building with the aim of making the labs regional testing centres for East Africa.

The two labs were selected after qualifying under several criteria with the screening process taking over eight months, according to Hanna Felleke, senior manager of Ethiopian Agribusiness Accelerated Platform at ATA.

Honey exporters have to acquire approval for every batch they export by international accreditors before their products are accepted in the international market. There are around nine internationally accepted standards for honey including adulteration, antibiotic residue, pesticide residue and sugar profile.

Currently, local honey exporters are sending samples to accredited companies in Germany and other foreign countries for quality testing and assurance in order to obtain approval to export their products.

During this process, exporters face challenges related to shortages of foreign currency, logistics problems, delays and inconvenience while sending samples overseas, according to Hanna, adding that the labs will avoid these hassles.

Currently, exporters, which are seven in number, are paying up to 5,000 Br to get approval for a single parameter, and the process could take half a month.

Both Bless and the Enterprise are also excepted to invest around five million Br in each of their labs.

Bless's laboratory located in Legetafo has been able to test some of the nine parameters needed for honey export as it had gained international accreditation for those parameters.

"The support will enable us to take our lab testing, product inspection and certification services to the next level and fill the gap in the market," said Ambi Bekele, branch office manager and inspection manager at Bless, which was established in 2013 with 130 million Br.

The Ethiopian Conformity Assessment Enterprise has been testing honey products locally, however, its test results were not accepted at the international level for lack of international accreditation, according to Teke Birhanu, marketing and communications director at the Enterprise.

Tadelle Kumie, a quality assurance expert for over two decades, hails the establishment of internationally accredited labs in Ethiopia.

Tadelle believes that the process of certifying and labeling local products in other countries has contributed to low export levels, as it decreased the trustworthiness of the local honey production.

"The support should aim to create a maintenance scheme for the machines, as getting forex and importing spare parts in the country is difficult," he said.

The two labs are part of ATA’s agribusiness incubation and acceleration platform established to create an end-to-end value chain approach focused on honey and beeswax. The platform works with both early stage and mature enterprises that have high-potential agribusinesses.

In Ethiopia, there are about 10 million bee colonies, of which five million are hived and over 800 identified as honey bee forages. The annual honey production potential of the country is estimated to be 500,000tn of honey and 50,000tn of beeswax. However, the total yearly production of honey has only reached 53,000tn, less than 10pc of its potential.

The two labs will also get support from the National Quality Infrastructure Development Project under the Ministry of Trade & Industry. The project obtained a 17.3-million-dollar loan financed by the World Bank.

New Capital Threshold, Small Inconvenience for Some, Existential Risk for Others

New World Order on the Ascent. Ethiopia Better Buckle Up!