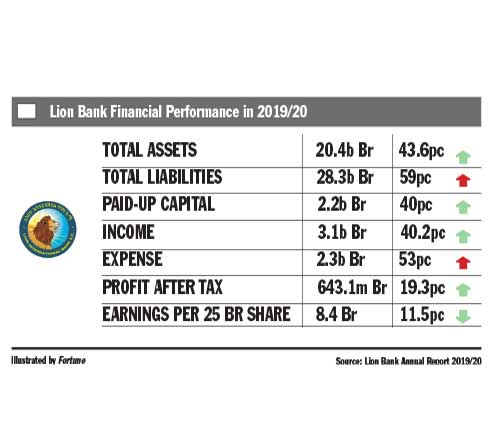 Income from interest on loans and advances helped Lion International Bank, one of the mid-sized banks, net 643.1 million Br in profit over the last fiscal year. The profit grew by 19.3pc compared with the previous period.

However, earnings per share (EPS), the net profit divided by the number of shares subscribed by 11,348 shareholders, sank by 11.5pc to 8.4 Br. The reduction was caused by a significant increase in paid-up capital, which grew by 40pc to nearly 2.2 billion Br. By the end of the year, the banking industry's total capital, including that of the Development Bank of Ethiopia and the Commercial Bank of Ethiopia, reached 112.8 billion Br.

The remarkable growth in profit after tax was undermined by the massive injection of fresh capital, according to Abdulmenan Mohammed, a financial statement analyst.

"Lion needs to have a capitalisation policy that maximises the returns of its shareholders," said Abdulmenan.

Berihun Yirdaw, a shareholder for the past six years, says the Bank achieved well above his revised expectations. He says that the pandemic's outbreak, the recurrent unrest, and the battered economy had worried him a lot.

"Such incidents made me readjust my initial expectations," said Berihun, adding that the Bank has been in a better position over the past three years, recovering from a stagnation in growth.

In his remarks in the financial statement, Gebretsadkan Gebretensae (Lt. Gen), the board chairperson of Lion, echoed Berihun's points, saying that salient challenges in the year left the banking business in gloomy circumstances.

Last year was overshadowed by the unprecedented COVID-19 pandemic, widespread political and social unrest, a downward spiral in export sector performance, and the subsequent chronic shortages in foreign currency, according to Gebretsadkan.

“Despite these challenges,” Gebretsadkan wrote, “the sustained growth recorded in the level of local deposits was an opportunity for the banking business.”

The Bank recorded a mixed performance in income-generating activities. Lion’s income from interest on loans, advances and NBE bonds soared by 59pc to 2.7 billion Br, while fees and commissions declined by 11pc to 197.6 million Br. Gains on foreign exchange dealings slumped by 93.3pc to 5.7 million Br, while other income also slightly dropped by three percent to 230.3 million Br.

The performance of non-financial intermediation operations is disappointing, according to Abdulmenan, who recommends that the management come up with ways to improve this area of business.

The expansion of expenses is considerable, according to the expert, who advises the management to keep an eye on the matter.

During the past fiscal year, the Bank opened 33 new branches, raising its total number of branches throughout the country to 262, four percent of the industry's total branches. The Bank's number of staff reached 5,480 from the previous year’s figure of 4,599.

The balance sheet of Lion grew remarkably. Its total assets increased by 55.9pc to 31.8 billion Br. The loans and advances of the Bank soared by 70.7pc to 19.8 billion Br.

The growth of loans helped earn a significant amount of interest income, according to Abdulmenan.

The total deposits mobilised by Lion increased by 59.4pc to 26.1 billion Br, leading the loan-to-deposit ratio to increase by 11 percentage points to 72pc.

This is an impressive improvement, according to Abdulmenan.

"The loan-to-deposit ratio appears to have reached a good level," said the expert.

Lion invested 3.9 billion Br in NBE five-year bonds, a 7.1pc decline from the previous year. This investment represents 12.3pc of the Bank's total assets and 15pc of its total deposits.

This growth could not be repeated this fiscal year, according to Berihun, who says that the latest incidents in the country, such as the war, could affect the economy and the growth of the Bank.

Lion is among the banks that have a strong presence in Tigray Regional State, and it is highly affected by the region's ongoing conflict.

Central Bank Avails 16B Br to the Commercial Bank