The last higher rate was recorded in August 2018 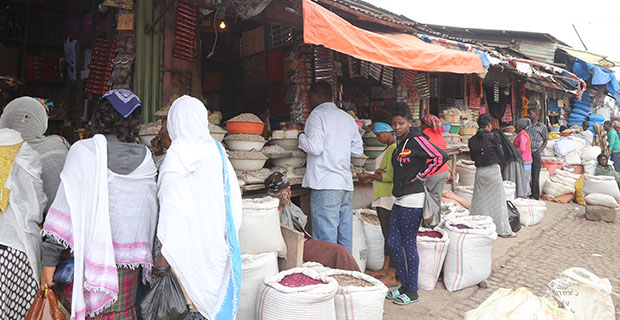 Headline inflation, an indicator of the cost of living, soared to 12.9pc last month, marking the highest rate in eight months.

The index has shown a 1.8 percentage point increase from the preceding month, according to data from the Central Statistical Agency.

“The rapid increase of food items has contributed to the rise of general inflation,” reads the report.

Last month, price increases were observed in all cereals, vegetables and  fruits, which contributed to the rise in food inflation, according to the report. The prices of foodstuffs whose demand increases during the holiday season, including meat, milk, cheese, eggs and butter, have also shown an increase.

The month of April is known for food price increases, since it is a fasting and holiday season, according to Getachew Asfaw, an economist who has published four books on the macroeconomic conditions of the country.

“Vegetables and fruits have higher prices during the fasting season, and the price of meat and eggs will sour on Easter,” Getachew said.

Easter saw a price increase in chicken ranging between 350 Br to 500 Br, while eggs were sold from four Birr to five Birr apiece. The price of a kilogram of butter has also climbed to between 350 Br to 400 Br.

Though the growth rate is marginal, non-food inflation also increased due to a rise in the price of khat, clothing and footwear, house rent, housing repair and maintenance, energy, health care and transport, especially automobiles.

Standing lower than last fiscal year’s average rate of 14.4pc, April’s inflation rate is the highest since August 2019, which saw a rate of 14.2pc.

Over the past eight months of the current fiscal year, the government was using different monetary policies, stringent fiscal policy and import and distribution of basic consumer commodities as a strategy to control the inflationary pressure, according to Yinager Dessie (PhD), governor of the National Bank of Ethiopia (NBE).

“However, the rate hit double digits due to the price increase of commodities in the global market and the imbalance of local demand and supply,” Yinager said last month at the parliament in his report of the macroeconomic situation of the country.

To decrease the rate to single digits, the Bank will continue to implement stringent fiscal and monetary policies along with administrative measures, Yinager advised.

However, Getachew sees the cause of the rate of growth from a different perspective, saying that the retail market has a structural problem.

“Most of the time retailers don’t have an economic justification when they make price increases,” he says. “The price changes are not made following demand and supply analyses.”

The buyers also accept such price amendments without being responsive, according to him.

How to Turn Food Inflation into Food Shortage