How to Give Away a Million Dollars


September 10 , 2021
By Peter Singer ( is a professor of Bioethics at Princeton University and founder of the non-profit organisation The Life You Can Save. )

It was recently announced that I am the winner of the 2021 Berggruen Prize for Philosophy and Culture, an annual one million dollar award for “major achievements in advancing ideas that shape the world.” I am, of course, delighted that my work has been recognised as doing what I have always hoped it would do: change the world for the better. I am honoured to be joining eminent previous winners, of whom the most recent are Martha Nussbaum, Ruth Bader Ginsburg, and Paul Farmer, and I am thankful to Nicolas Berggruen for his interest and support – all too rare among wealthy investors – of philosophy and ideas.

Once the excitement of the news died down, I began to think about what I would do with the money. It did not take me long to decide to give it away.

First, my wife and I recognise that we have enough money to live comfortably and do the things that really matter to us, and we feel that our children are in a similar position. It helps, of course, that they live in Australia and, unlike much of the world, have safe drinking water, free or affordable health care, and free education for their children.

Moreover, I am well-known for arguing that just as it would be wrong to leave a child drowning in a shallow pond because you did not want to ruin an expensive pair of shoes, it is wrong to spend money on luxuries that could prevent children from dying of malaria or other common conditions that each year cause the deaths of millions of low-income children.

Given that, how could I justify using the prize money to buy luxuries for me or my family?

About a decade ago, I founded The Life You Can Save, a charity that spreads the message that it is surprisingly easy for most people in affluent countries to make a huge difference to those in extreme poverty in low-income countries. The Life You Can Save currently recommends 23 charities that have been independently assessed as offering extraordinary value for money in saving and improving the lives of people in extreme poverty.

I have decided to give half of the prize money to The Life You Can Save. I am doing this because over the last three years, each dollar spent by The Life You Can Save generated an average of 17 dollars in donations for its recommended nonprofits. (To forestall the cynics, I will add that I have never taken a cent from the organisation.)

But I am not giving all of the prize money to help people in extreme poverty. More than half a century ago, I learned that many of the animals whose flesh I was then eating were condemned to miserable lives crowded into the dim sheds of factory farms. I became a vegetarian and wrote "Animal Liberation," which in turn contributed to the rise of the modern animal rights movement. Factory farming remains a horror, ruthlessly exploiting tens of billions of land animals every year, and vast numbers of fish, too. Animal production is also a major contributor to climate change and adds to the risk of pandemics. I plan to donate more than a third of the money to organisations combating factory farming and recommended as effective by Animal Charity Evaluators.

There will still be some left, and for that, I invite readers to help me decide on the distribution, on the basis of the ethical approach outlined in "The Life You Can Save," which is available as a free e-book and audiobook on the organisation’s website, where you will be able to tell me what you think.

What about other options? Should I donate to organisations advocating a more rapid transition to net-zero greenhouse-gas emissions?

I thought of that but decided that the number of organisations working on that already reduced the chances of my contribution making a significant difference. Some thoughtful effective altruists urge us to focus on reducing the risk of extinction. But the uncertainties about how to achieve that objective are so great that I prefer to donate to projects for which the odds of accomplishing something positive are vastly higher.

I am confident that donating to save lives, restore sight, or enable a family to escape extreme poverty does more good than donating to a museum or opera. Other comparisons are more difficult.

How does saving a million hens from lives crammed into bare wire cages rank against lifting a dozen families out of extreme poverty?

In the end, there are several causes that would be good to support. I can claim no more for mine than that they are among the best available. 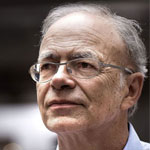 is a professor of Bioethics at Princeton University and founder of the non-profit organisation The Life You Can Save.

TAXES: A SMALL PIE CAN ONLY GIVE SO MUCH (LESSON IX)

Grow or Give Up Licenses: Bureau to Small Businesses

Give Abiy a Chance

Business Person of the People, Kabir Hussien, Passes Away at 72

The Million Dollar Question to What Happens to Floated Birr