How the IMF Can Battle Gradual Irrelevance


November 23 , 2019
By Mohamed A. El-Erian ( Mohamed is a Chief economic adviser at Allianz, the corporate parent of PIMCO where he served as CEO and co-chief investment officer, and former chairman of US President Barack Obama’s Global Development Council. )

These days, the International Monetary Fund’s policy recommendations – especially as they pertain to the advanced economies – have little impact. Although this is partly a consequence of more inward-looking national politics in richer countries, the Fund itself is not blameless, writes Mohamed A. El-Erian, Chief economic adviser at Allianz, the corporate parent of PIMCO where he served as CEO and co-chief investment officer, and former chairman of US President Barack Obama’s Global Development Council.

This year, I didn’t attend the October annual meetings of the International Monetary Fund and the World Bank in Washington, DC. Instead, I paid close attention to reports of the gathering and talked to people who were there whom I respect. What emerged is depressing for the wellbeing of the global economy. In particular, the prospect of continued weakness and fragmentation pressures will compound the challenges to the credibility and effectiveness of multilateral institutions.

The convening power of the IMF and the World Bank is unquestionably strong, if not unique. Every year, their annual meetings attract top economic and financial officials from more than 180 countries, as well as a far larger number of private-sector representatives. It is an exceptional global gathering, not only for officials to exchange views but also for corporate networking.

Over the last few years, the official meetings have increasingly been overshadowed by the ever-growing number of parallel events, notably diminishing the gathering’s contribution to better policy making. In fact, this year, I could not find a single person who had paid much attention to a key policy output of the meetings – the communiqués issued by the two institutions’ top policy making committees.

This is in stark contrast to the past. I vividly remember the days, not so long ago, when officials prepared diligently for these policy discussions. Private-sector participants would eagerly await their outcome in the hope of gaining a better understanding of the global economic outlook and the prospects for key national and international policy initiatives. Markets were known to move on particular remarks, which is why officials would spend hours refining the communiqués, lest they be misinterpreted.

The charitable reading of this change is that the substance has shifted to the parallel events. Consider the IMF. The communiqué of the International Monetary and Financial Committee (IMFC), the Fund’s top member-country policy making panel, is preceded by the release of two flagship IMF publications on economic and financial trends (respectively, the World Economic Outlook and the Global Financial Stability Report). These are supplemented by press conferences and speeches involving many Fund officials. The themes are then picked up in a host of seminars, as well as in presentations by national officials. As a result, many policy implications are covered well before the IMFC meets.

Yet as much as I respect and admire the multilaterals, and I have done so for decades, I fear that this explanation is too partial. Yes, the IMF maintains an impressive analytical edge, owing to its talented and dedicated staff as well as its unique links to countries. Yes, it has made important strides in improving its understanding of the relationship between financial markets and the real economy. And, yes, it has bravely taken the lead in shining more light on the economic impact of gender inequality and climate change. But its forward-looking analyses have too often proved to be backward-looking, and its quantitative projections have consistently been subject to considerable revisions.

Even more worryingly, the Fund’s policy recommendations – especially those pertaining to the advanced economies – have little impact (to put it politely). One need only look at the widening gulf between what IMF officials have said and the bland, repetitive language of the IMFC communiqués. The policy insights fall on more deaf ears when finance ministers and central bankers are back in their national capitals, underscoring the current ineffectiveness of what once was a key opportunity for improving win-win policies.

Many of the key reasons for this diminished influence have little to do with the multilateral institutions themselves. Politics in many advanced economies has turned increasingly inward, amplifying disdain for policies advocated by the Fund. Years of low and insufficiently inclusive growth have narrowed the scope for international policy cooperation, instead fueling disrespect for global norms and the international rule of law. And even the inclination to use the Fund in pursuit of national interests has waned: the US has simply opted to weaponise its own economic tools directly.

But the IMF and the World Bank are not blameless. For starters, they have been too slow to implement internal reforms. Both institutions also could be quicker to own their recent mistakes, such as those concerning Argentina’s latest financial debacle, the excessive growth of debt among the least developed economies, and the failure to foresee the aftermath of the 2007-8 financial crisis.

In addition, the cherished principle of uniformity of treatment of member countries has been visibly stretched, often in a way that has further dented the standing and credibility of institutions whose governance is still informed by the past. In particular, Europe has long been overrepresented relative to emerging economies, and Europe and the US retain a monopoly over the leadership of the IMF and World Bank, respectively.

These shortcomings raise broader concerns. They increase the tendency toward beggar-thy-neighbor policies at the national level and intensify pressures for fragmentation and disorderly deglobalisation. They also expose the global economy to the risk of financial disruptions that would further undermine already fragile and insufficiently inclusive growth dynamics.

Multilateral organisations often complain that major governments’ weak appetite for institutional reform limits the scope for improvement. After all, these countries are not only the largest shareholders, but also have sometimes blocked initiatives supported by the vast majority of other member states.

Admittedly, the IMF and World Bank are constrained by the world in which they operate. But their managements also have tended to shy away from embracing reform initiatives and making them their own. Rather than acting as a catalyst by underwriting the considerable reputational risk involved with approaches that inevitably face resistance, they often have been pushed to the sideline.

With both institutions now under new management, there is a new window for launching a process of beneficial change for the global economy. Let us hope that last month’s disappointing annual meetings can serve as a wake-up call. There is no worse fate for these organisations than gradual irrelevance. 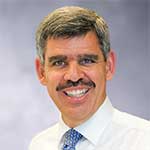 Mohamed is a Chief economic adviser at Allianz, the corporate parent of PIMCO where he served as CEO and co-chief investment officer, and former chairman of US President Barack Obama’s Global Development Council.

What the IMF Desires to See in Ethiopia

The Battle for Peace with Few Allies, No Time!

Ethiopia Signs Up for IMF Deal: What's in Store?