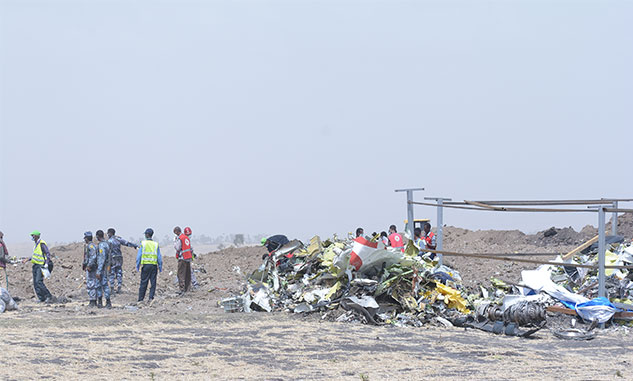 The first Ethiopian family has filed a lawsuit against Boeing, the United States aircraft manufacturer, over the March 2019 crash of a 737 MAX aircraft operated by Ethiopian Airlines.

The first Ethiopian family has filed a lawsuit against Boeing, the United States aircraft manufacturer, over the March 2019 crash of a 737 MAX aircraft operated by Ethiopian Airlines.

The family of Mulugeta Asfaw, a monitoring and evaluation specialist at COWASH Regional Support Unit in Hawasa, filed the lawsuit represented by a consortium of attorneys - Power Rogers & Smith, LLP; Friedman Rubin PLLP; and Shakespear Feyissa.

The lawsuit, filed in the United States District Court for the Northern District of Illinois on June 25, 2019, asks the Court to impose 100 million dollars in punitive damages against the aircraft manufacturer for defective design and failing to issue adequate warnings about the Boeing 737 Max model.

The 46-page filing accuses the company of "conspiring with the Federal Aviation Administration" and "falsifying and omitting information from pilots and airlines."

"This case might be one of the biggest punitive damages in United States history," said Shakespear.

Families of the deceased and lawyers did not welcome Boeing's statement.

Mulugeta, a father of three, was on board the doomed Ethiopian 302 flight bound for Kenya for an advanced capacity building project management training. Mulugeta had obtained his master’s degree in economics from Addis Abeba University.

The family of Mulugeta confirmed to Fortunethat Sintayehu Abebaw, his brother-in-law residing in the United States, has been delegated as a special administrator for the estate of Mulugeta for probate purposes.

"The trial will be held in a year and a half or so," Shakespear told Fortune.

Mulugeta died along with 148 other passengers hailing from 35 countries. The death toll included the pilot, the co-pilot and six flight attendants who perished when the aircraft plunged into a desolate field in Tulu Fara Wereda, a village located approximately 40Km from Modjo town on March 10, 2019. The plane crashed shortly after takeoff from Bole International Airport on its scheduled flight to Nairobi, Kenya.

The preliminary report released by the Aircraft Accident Investigation Bureau of Ethiopia last April indicated that the pilots on command followed the proper procedures, and the aircraft was issued airworthiness directives, but uncommanded nose-diving was encountered before the crash.

The same problem was reported as a cause of the Lion Air plane crash that claimed the lives of 189 people. The 737 Max 8 owned by the Indonesian airline fell into the Java Sea shortly after takeoff from Jakarta last October.

Although the family's lawsuit is the first from Ethiopia, whose 17 nationals died in the accident, a couple of families from other countries have already sued Boeing. A French woman whose husband died in the crash sued the aircraft manufacturer in Chicago, while a Rwandan child whose father was killed in the accident and the parents of an American woman have filed separate suits against the company.

The families of a 29-year-old Kenyan engineer, George Kabau, and a UN worker Joanna Toole from the United Kingdom, have also begun legal actions in federal courts in Chicago.

Last week, Boeing announced 100 million dollars in funds to address family and community needs of those affected by the accidents of Lion Air and Ethiopian Airlines flights. It also expressed its commitment for additional charitable donations from the employees of the company in support of the families and communities impacted by the accidents.

"The families and loved ones of those on board have our deepest sympathies, and we hope this initial outreach can help bring them comfort,” Dennis Muilenburg, chairman, president and CEO of Boeing, said in the statement that was issued at the end of last week.

Families of the deceased and lawyers did not welcome Boeing's statement.

“This type of offer so early in the litigation process is unprecedented," said Robert A. Clifford, another United States-based lawyer for victim's families. "Because there is still so much to learn about what occurred, it also appears to be disingenuous."

The media department of Boeing did not respond to an email inquiry from Fortunebefore the paper went to print.

The Ethiopian Dream without the Ecosystem

First Ever Bamboo Strategy Springs to Life
Share this...