Demeke, Gedu and Hailemariam to appear before judges in Bahir Dar 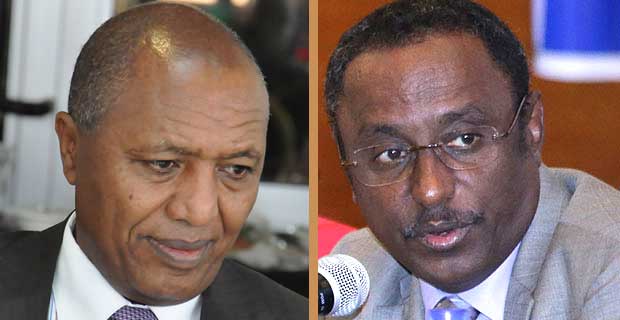 A regional supreme court has called three high-level government officials to testify in defence of Bereket Simon, former board director and Tadesse Kassa, former executive of Tiret Corporate, who were charged with alleged acts of corruption.

Along with the three high-level government officials, six more witnesses were called as defence witnesses. Two prominent lawyers, Million Assefa and Yohannes Woldegebriel, Tekeste Gebru, a partner at HST Consulting, and Tiret's founding, Wondwessen Kebede, are also among the witnesses.

Bereket, former board chairperson of Tiret, and Tadesse, former CEO of the company, were charged in April 2019 alongside Daniel Gizaw, CEO of dVentus Technologies, on four counts.

Under the first count, Bereket and Tadesse were charged in relation with share transfers of Dashen Brewery to Duet and Vasari, two foreign firms. The prosecutors accused the defendants of allegedly selling shares of the company to Duet, while Dashen had other options to raise capital. The charge also accused them of allegedly selling the company without carrying out an asset valuation or due diligence.

The charge also claimed that the defendants decided to sell half of the company's shares in 2012 to Duet for 90 million dollars, which is lower than Meta Abo Breweries' sale value. The charge argues that the government sold Meta Abo, which has less production capacity, demand and technology than Dashen, for 225 million dollars.

The prosecutors also stated that a total of 106 million dollars, including the premium and a joint budget for expansion, was not deposited in the account of Tiret. They are also accused of allegedly making Dashen cover the 63,500-dollar-expense for the investment and environmental impact assessment, which Duet used to make decisions in buying shares at Dashen.

Until 2018, when the two left their posts at the company, Duet did not pay 53 million dollars, according to the charge.

Under the second count, the two, who were also board members of dVentus Wind Technologies Plc, are charged for allegedly causing 210 million Br worth of damages to Tiret. The prosecutors allege they agreed to and signed an investment agreement with dVentus for the establishment of a smart electric metre and wind generation plants without an environmental impact assessment and due diligence or an approval of the board of the company.

For the investment, Tiret contributed 158.5 million Br in cash and leased land worth 24 million Br, according to the prosecutors.

"However, the company isn't operational until now," reads the charge.

It also alleges Tadesse allowed 48.4 million Br to be transferred into a dVentus account without any documents. They are also charged for causing 26.8 million Br in damage to Tiret in the form of expenses for factory rent as well as building and office maintenance.

In the third count, the three of them, including Daniel, are charged for making Tiret liable for 46.6 million Br and other loans that dVentus took before Tiret became a shareholder in the company.

By doing so, the defendants let Tiret lose 102.6 million Br, the charge alleges.

In defence of the charge, the defendants have submitted a preliminary objection and statement of defence. In their defence, they appealed to the court to drop the charges, since the prosecutors claimed the defendant allegedly violated the 2014 anti-corruption proclamation while claiming the crimes were committed five years before the legislation of the proclamation.

The defence lawyer of Bereket and Tadesse has listed nine witnesses, including three top-level government officials. Two of the witnesses will testify both for Dashen Brewery and in Duet's cases. The lawyer also filed an 11-page list of close to 1,000 articles of documentary evidence.

The defence witnesses were supposed to testify last Thursday, January 9, 2019, however, the session was postponed for this Monday, since the prosecutors did not get the documentary evidence from the registrar. Then they requested for postponement of the session to get prepared for cross-examination.

The two were arrested last year January in the capital. They were prominent members of the former EPRDF during the armed struggle against the Marxist military government. Following the downfall of the Dergue, ANDM’s assets were transferred to Tiret, which now runs a conglomerate of multiple subsidiary companies. Until 2018, they were serving as top executives of Tiret.

Meditating About People: In Defense of the Youth

In Defense of the Secular State