Personal computers, especially laptops, have become the norm for much of the college crowd. But new tariffs have greatly shocked importers, who did not expect to have to increase their products by as much as 5,000 Br, writes TEMESGEN MULUGETA, FORTUNE STAFF WRITER. 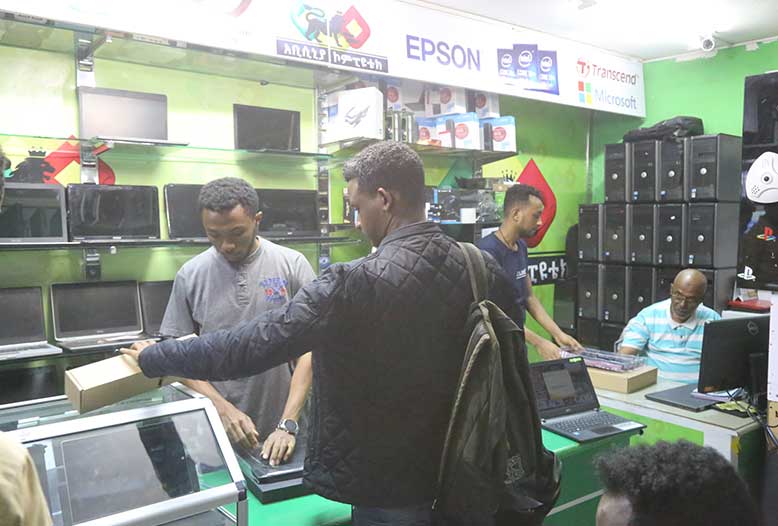 Customers visit a laptop shop at the Kkare Building to compare products.

What he had expected to be a thrilling day was not turning out as planned for high school student Hailmikael Adugna. A computer technician in his spare time, Hailmikael had just purchased a used HP laptop at Green Teck Computer Shop for 8,000 Br.

Hailmikael, who started providing door-to-door computer maintenance services a year ago, had decided to buy a laptop to help him with his education and also his aim of developing a website to promote his business. But upon arriving at the the shop in Megenagna on September 19, 2019, he was shocked to learn that the price of laptops had risen immensely, so he visited three other shops to compare prices.

He found the price spike everywhere he looked. "The price wasn't as I expected before,”  said Hailmikael.

But due to the requirements of his business, he reluctantly forked over his savings.

Many besides Hailmikael have witnessed the sudden price increase in the laptop market in the past six weeks, according to retailers.

Everyone agrees that it arrived after the revised customs tariff issued by the Ministry of Finance imposing a 15pc tax on used and new computers. The amended customs tariff was enacted starting from August 2019.

The tariff revision came about with the main aim of increasing revenues. In this fiscal year, the government targets to collect 253 billion Br from domestic tax revenues, which is expected to cover 65pc of the federal budget.

Under the tariff book of the country, there are six duty tax rates ranging from zero to 35pc, which are applicable based on the goods imported.

The global laptop market was valued at 101.7 billion dollars in 2017. Growing internet usage, rising disposable incomes, swelling global population, and increased awareness among consumers about the emergence of new technologies are among the primary growth stimulants for the market.

The revision on the customs tariff came into effect in line with a harmonised, internationally standardised system of names and numbers to classify traded products and was revised in 2017, according to Fentaye Weldesenbet, tariff allocation senior officer at the Custom Commission.

A customer looks for laptops at Green Teck Computer Shop in Megenagna, one of the shops that sells accessories and computers.

The Commission was established in 2018 after it split from the then Ethiopian Revenues & Customs Authority. Under the new structure, the Commission is in charge of customs and duty matters and reports to the Ministry of Revenues.

"The implementation of the revision was delayed for two years due to filtering the importers who require a privilege and amending different types of taxes takes time," she said.

The tariff was revised since Ethiopia is a signatory to the International Convention on the Harmonized Commodity Description and Coding System. It is expected to be reviewed every five years.

Ethiopia became a member of the World Customs Organization (WCO), which was established in 1952 as the Customs Co-operation Council. The WCO is an independent intergovernmental body. The Organization's mission is to enhance the effectiveness and efficiency of customs administrations.

Before the revision two months ago, the customs tariff was 20pc, but now the full duty on a computer is 35pc. The new amendment added a 10pc surtax and a five percent customs tax on the product.

Surtaxes levied in addition to and based on the regular tax rate and excise tax is a legislated tax on specific goods or services. The surtax is levied mainly on luxury items.

Seife Tekeleweld, the owner of Green Teck Computer, strongly argues against the surtax on computers, since the product is not a luxury item but rather a necessity for students.

Following the adjustment of the tariff, the number of customers flowing to Green Teck Computer has significantly decreased, according to Seife, who has been in the business for the past four years.

He claims that he was selling five to ten laptops on average a day before the tariff amendment. But now there are days that he does not sell a single laptop, he said.

"Most of my customers only request the price of the product and leave without buying," he says.

Recently, Seife sold brand new laptops for between 10,500 Br  and 23,000 Br, and most of the time his customers are university students and people who work on research papers.

“After the custom tariff amendment, the price of a single laptop showed a 5,000 Br increase,” Seife said.

The current season is known for the laptop market boom, since it is a time when high school graduates join universities.

In this season, the causal challenge of the retailers was getting supplied, and the price increase makes their business more challenging, according to Seife.

Another person who was affected by the price increase is Henok Seleshi, a father of four and a distributor of laptop computers for the past eight years.

Henok, who imports laptop accessories in addition to laptops, printers, photocopy machines and projectors from Dubai, says that he will lay off some of his employees.

''I'll decrease my employees from eight to two,'' he said.

His customers are universities and colleges, as well as wholesalers who distribute the products. On average he sells 150-200 laptops at a time through tenders. But now for him after the customs tariff amendment, he claims that his customers do not visit him frequently.

"I have a lot of expenses, and the increasing price of the laptops recently has stopped me from covering my expenses," Henok, who has two warehouses in the Mexico neighbourhood, told Fortune.

At Henok's shop, the price of used laptops increased by 4,000 Br, while the brand new laptop prices have risen by 3,100 Br. Two weeks ago, when he received his imported laptops, he paid 5,680 Br tax for each computer.

The latest tariff rise is aimed at encouraging local assembly of laptops by discouraging imports, according to Fentaye.

"If they didn't support us, how could we assemble laptops in the country," Henok claims.

The customs tariff has been revised eight times with the main aim of increasing revenue from taxes and duties and clarifying some ambiguities that have been seen in the previous tariff book. While the Council of Ministers is mandated to issue the customs tariffs, the Ministry of Finance has been delegated to revise the tariffs.

Yohannes Woldegebriel, a lawyer who specialises in tax law and the commercial code, believes that imposing a tax on computer products is meaningless.

“The government imposes a surtax on highly imported goods when financial situations constrain them,'' he said, ''but the computer is not clustered with these goods.''

Computers are used for both education and office purposes, so most of the time, universities and government offices procure them, according to him.

Aiming to motivate local importers to assemble them is overly ambitious, because the local technological institutions are not capable of this, he argues.

However, Hailmikael, who really needs the laptop, bought a used HP laptop for 8,000 Br, since he did not have a choice other than buying one.

Customers visit a laptop shop at the Kkare Building to compare products.

A customer looks for laptops at Green Teck Computer Shop in Megenagna, one of the shops that sells accessories and computers.

MALEFICENT: A GAME OF THRONES RIP-OFF