January 1 , 2022
By Winnie Byanyima ( executive director of UNAIDS and under-secretary-general of the United Nations. )

During the HIV/AIDS epidemic a generation ago, African countries were priced out of lifesaving drugs by pharmaceutical firms that prioritized profits over lives. If rich countries had learned the lessons of that historic injustice, the world might be celebrating the end of COVID-19, rather than bracing ourselves for another wave, writes Winnie Byanyima, executive director of UNAIDS and under-secretary-general of the United Nations.

This month, the world could have been celebrating the waning of the COVID-19 pandemic. Instead, vaccine apartheid and restricted production continue to fuel the spread of the coronavirus.

A year has passed since the first COVID-19 vaccines were approved, offering hope that humanity could be liberated from this disease. Scientists did their part by creating safe and effective vaccines with unprecedented speed. But world leaders failed to deliver them to all.

Public health experts, developing-country governments, and the People’s Vaccine Alliance warned that persistent low vaccination coverage in large parts of the world would create a risk of new variants and prolong the pandemic.

We argued that ending the pandemic required enabling developing countries to make their own vaccines. We urged rich countries to share the rights to vaccine technology and COVID-19 treatments, removing barriers at the World Trade Organisation (WTO). Former world leaders, Nobel laureates, nurses, jurists, and millions of individuals have echoed this call.

But rich countries turned a deaf ear, bowing to the pressure of pharmaceutical corporations. Despite receiving huge amounts of public funding to produce the vaccines, these companies still dictate the terms of supply, distribution, and pricing. Pfizer, Moderna, and BioNTech alone are making a profit of 1,000 dollars every second from their COVID-19 vaccines.

Putting profits first has resulted in less than four percent of people in low-income countries being fully vaccinated, creating an optimal breeding ground for new variants. Meanwhile, at least five million people have now died of the virus worldwide – though some calculations put the number considerably higher.

In Africa, pain mingles with anger. The continent remains unprotected – just one-quarter of African health workers are fully vaccinated – and is bracing for more variants. Like many Africans, I have lost friends and family to this disease. Exhausted relatives in my home country of Uganda no longer announce deaths – let alone report cases. In Africa, six of every seven COVID-19 cases have gone undetected.

It feels like déjà vu. Between 1997 and 2006, 12 million Africans died from HIV/AIDS because pharmaceutical monopolies priced poor countries out of lifesaving antiretroviral drugs. Getting access took a spirited movement that began with people living with HIV and expanded to include everyone from doctors and religious leaders to Nelson Mandela. Eventually, governments and producers of generic drugs in India, Thailand, Brazil, and elsewhere worked together to break the monopoly, and the price of HIV drugs dropped by 99pc.

Imagine if the world had learned the lessons of that historical injustice. Imagine if a year ago, world leaders had agreed to compensate the vaccine developers generously, but not give them exclusive rights. Imagine if they had insisted that, to qualify for tens of billions of dollars in public funding, vaccine producers would have to share any successful formula openly. Imagine if they had agreed to pay qualified producers everywhere – in both developed and developing countries – to manufacture the vaccines. And imagine that governments had started building enough additional manufacturing capacity around the world over a year ago, rather than relying on a handful of corporate monopolies to repurpose a few factories.

It is a moral disaster that some people are making billions of dollars by sitting on vaccine technology as billions are left unprotected and millions die avoidable deaths. We must imagine a different way, one that would vaccinate the world, address known and future variants, and foster an equitable global economic recovery from the pandemic. Just as US President Franklin D. Roosevelt broke up industrial monopolies to fight tyranny in World War II, the United States can help the world overcome pharmaceutical monopolies to fight COVID-19.

Wealthy countries must scale up donations of excess doses and end vaccine hoarding. Despite repeated proclamations, as of October, rich countries had delivered only 14pc of 1.8 billion promised vaccine doses (already an inadequate number). These countries can also facilitate vaccine purchases. Yet even when African countries buy their own supplies – as Botswana did, purchasing a half-million doses from Moderna at 29 dollars per dose, more than wealthy countries pay – companies often fail to meet their delivery commitments.

But donations and charity, though welcome, will never be enough. To end the pandemic, developing countries must have the right and recipes to manufacture their own reliable supply of safe and effective vaccines.

The US government-funded and co-developed the vaccine sold by Moderna through an agreement with the National Institutes of Health. If the manufacturing know-how was shared with the World Health Organisation through its South Africa COVID-19 mRNA hub, qualified manufacturers worldwide could begin to produce it. Experts have identified more than 100 qualified companies in Africa, Asia, and Latin America which have the capacity to produce COVID-19 mRNA vaccines.

The proposed temporary intellectual-property waiver covering all COVID-19 vaccines and technologies at the WTO remains a necessary precondition to defeat the pandemic. The waiver removes complex legal barriers to expanding vaccine production by restoring to governments the authority to choose when and how to enforce patent protection. The waiver could end pharmaceutical companies’ global monopolies while still allowing them to be compensated.

US President Joe Biden was right that the emergence of the Omicron variant “reiterates the importance” of approving the waiver. The US can use its diplomatic and economic influence to push other wealthy powers to end their opposition and embrace a resolution that will benefit the whole world.

We do not have another year to lose. Only solidarity can end this pandemic and save millions of lives. 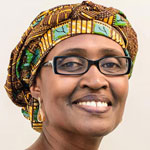 executive director of UNAIDS and under-secretary-general of the United Nations.

Ralph Doesn’t Quite Break the Internet

Break the Taboo over Pay Scale

Breaking the Impasse: A Plea to Feed the Good

With Vaccine Nationalism, COVID Gets Its Way