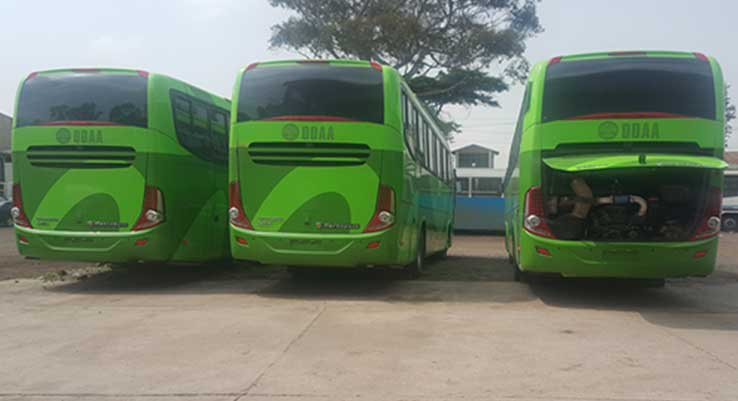 ODAA Integrated Transport S.C. has entered the transportation business with 50 cross-country buses bought from Volvo. Four of the buses have arrived, and the company expects the remaining buses to arrive in the country in a few weeks from Djibouti Dry Port.

ODAA Integrated Transport S.C, part of the economic revolution in the Oromia Regional State, has entered the transportation business with 50 cross country buses.

The company bought the buses from Volvo, a Swedish car assembler, for 400 million Br. Having 55 seats and equipped with Wi-Fi services and televisions, each bus cost the company 5.8 million Br.

So far, four of the buses have arrived, and the company expects to start service beginning this week on four routes; Gonder, Neqemit, Dire Dewa and Bahir Dar. It also expects the remaining buses to arrive in the country in a few weeks from Djibouti Dry Port.

The length of the buses is per the new standard of the Ethiopian Federal Transport Authority measuring 13.5m, which was previously 11.5m. Before commencing operations, the company is waiting to receive grades from the Authority, according to the communications department at the Authority.

To buy the buses, ODAA floated a tender last year, selecting five European vehicle manufacturers to take part in the bidding process. Mercedes-Benz and MAN from Germany, Scania and Volvo from Sweden and IVECO from Italy were the companies selected for the restricted bid.

Equatorial Business Group (EBG), a local agent of Volvo that has been in business since 1993, will handle the handing over process of the buses and after-sales services.

Volvo gave ODAA a one-year guarantee and provides technical support through two employees who will be based in Ethiopia, according to Ayalew Yimam, senior director of the Volvo business unit at EBG.

A Brazilian Company, Marco Polo, built the external bodies of the buses.

ODAA paid 90pc of the cost of the buses amounting to 263.3 million Br; the remaining 10pc will be paid after all the buses are delivered, according to Ayalew.

The initial schedule to buy the buses was last year, according to Eshetu Zeleke, CEO of ODAA, which was established in 2017 with 10,000 shareholders and 200 employees.

"But it was delayed due to the forex crunch," Eshetu told Fortune.

For the purchase of the buses, the company has secured a 270-million-Br loan from Commercial Bank of Ethiopia, according to Eshetu.

ODAA will join the existing 11 cross-country transport companies that own 170 ultra buses. The country also has 1,357 regular buses.

The company also plans to extend its services by procuring an additional 300 buses in the next three years and start providing transport services to Djibouti, Asmara, Moyale, Mekele, Khartoum and Juba, according to Eshetu.

The company is also working to sell fare tickets through a mobile ticketing service, he added.

The new buses will play a significant role in minimising the problem of access to rural transport due to a shortage of buses, according to Fekadu Gurmessa (PhD), an expert in transport geography.

"The company should consider lack of quality roads and spare parts as challenges its will face," Fekadu said.

Initiated two years ago as part of the economic revolution in the Oromia Regional State, ODAA has also ventured into the fuel retail business. It is in the process of constructing 15 fuel stations all over the country on top of the two fuel stations that are already built in the capital and is expected to start services very soon.

The company plans to build 100 fuel stations in Ethiopia within two years. These stations will be equipped with coffee shops, shopping centres, restaurants and children's playgrounds.

Local Professionals to Take Over Management of Railway
Share this...