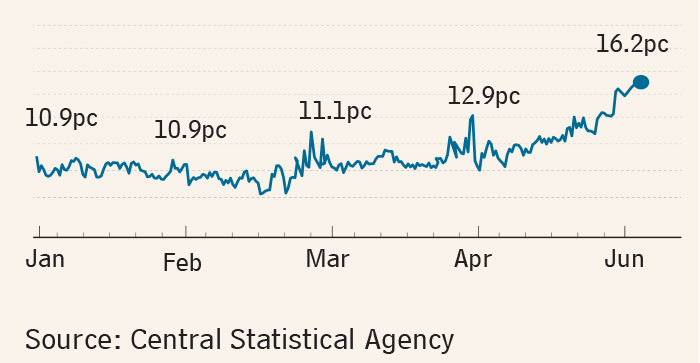 A new task force has come to life to explore the causes of the recent cost of living escalation and to come up with recommendations to keep the rate down.

Chaired by Getachew Adem, deputy chief of the National Planning & Development Commission, the task force has six members. The members are from the ministries of Trade & Industry, Finance and Agriculture, as well as the Central Statistical Agency, the National Bank of Ethiopia and the Commission.

The task force will regularly follow up on the inflation rate and conduct research to forward recommendations to the macroeconomic committee, chaired by Prime Minister Abiy Ahmed (PhD).

The task force was formed two weeks ago and held its first meeting to outline duties and assignments, according to Zelalem Berhanie, public relations and corporate communications director of the Commission.

“The team has already started collecting data for the study,” Zelalem told Fortune.

The headline inflation rate, which indicates the cost of living, started to creep up last December when it jumped to double-digit figures at 10.4pc.

Unrest in different parts of the country, the forex crunch, a shortage of commodities and lower productivity could be the reasons for the rate hike, according to Ahmed Shide, minister of Finance, speaking to the parliament in the middle of this month.

The rapid jump of the rate last month was primarily attributed to be the Easter holiday and the Ramadan season, in addition to other factors by the Central Statistical Agency.

Cereals like teff, rice, wheat, barley, sorghum and maize have shown unexpected and rapid price increases in addition to the price jump of vegetables. Factors that contributed to the slight increase of non-food inflation are a rise in the prices of narcotics, clothing, footwear, health care and automobiles, according to the report.

Standing higher than last fiscal year's average rate of 14.4pc, May's inflation is the highest since June 2018, which saw a rate of 16.8pc - the highest in two years.

Even though the government aspires to keep inflationary pressure to a single digit, the rate has remained in or close to double-digits for the past two years, contrary to the preceding year when the inflation rate was less than eight percent on average.

Alemayehu Geda (Prof), a macroeconomist and university lecturer with two decades of experience, fears that the rate could go even higher.

"Considering the current economic situation, the rate could hover between 15pc to 20pc," said Alemayehu.

He also fears the rate could have budgetary implications if it continues at the same growth rate.

"As the budget is planned with the consideration of a single-digit rate though the rate stays in double digits," said Alemayehu, "it will affect the budget and lead the government to approve an additional supplementary budget."

Headline Inflation Clocks In at 34.2pc

Lack of Supplies May Force Tigray Humanitarian Operations to Shut Down: UN-OCHA