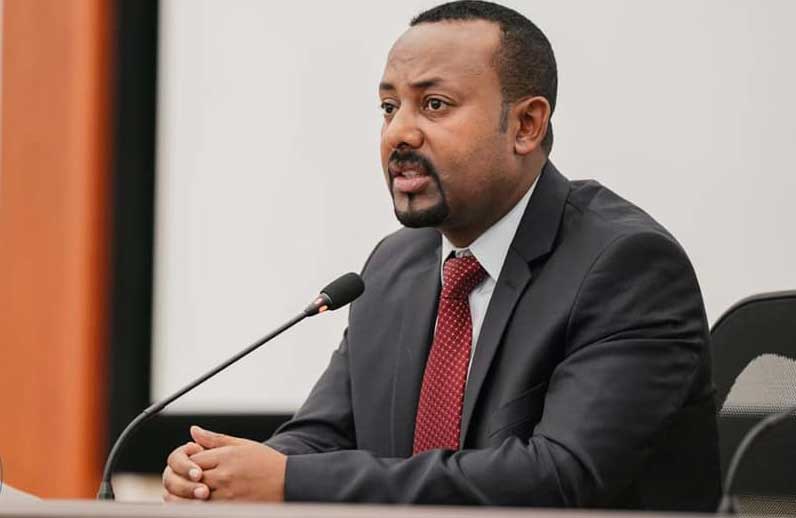 “We've decided that the central bank will avail the money to private banks to enable them to reschedule loan payments and proffer additional loans to the private sector, said Prime Minister Abiy Ahmed (PhD) in a press conference last week.

In light of the spread of Novel Coronavirus (COVID-19), the Office of the Prime Minister has announced the release of 15 billion Br through the National Bank of Ethiopia to address the liquidity crisis of the commercial banks.

Out of the 15 billion Br, commercial banks are awarded the amount they have paid for one year and three months to purchase the mandatory 27pc bond, which they have been buying for the last nine years that would have been paid from April 2020 up to June 2021.

“We've decided that the central bank will avail the money to private banks to enable them to reschedule loan payments and proffer additional loans to the private sector, said Prime Minister Abiy Ahmed (PhD) in a press conference last week.

Over the last week, the macroeconomic team chaired by Girma Birru had a series of meetings with key industry stakeholders like horticulture exporters, high-bracket taxpayers, coffee exporters and bankers to diagnose the pandemic's impact and launch a major economic stimulus package.

During the deliberation, the banks requested that some of the legal framework be loosened and that the release of the NBE bond bills address the liquidity stress. In April 2011, the central bank introduced a directive and started mobilising resources from private banks to finance priority sectors identified by the government as the driving forces of the economy.

The directive compels private commercial banks to buy bonds worth 27pc of their loan disbursements with a five-year maturity period at an interest rate of three percent. Lately, it was raised to five percent, while the savings deposit rate stood at seven percent.

Although NBE repealed the directive in October 2019, it holds billions of Birr from the sales of bonds. The bond bill was growing by an average of two percent a month to reach about 94.6 billion Br as of December 2019.

However, starting from the last two months of 2019, the banking sector suffered from severe liquidity stress that has not been seen before.

The lowest liquidity level of all banks was in November and December 2019, averaging 14.4pc each month. This is not only less than the regulatory requirement of 15pc but also the lowest position of liquidity in the last three years.

The liquidity ratio of private banks specifically has been decreasing on a monthly average of 1.4pc and reached its lowest position of 16.7pc in December 2019.

This led the Ethiopian Banker’s Association to organise a study to find the root cause of the liquidity stress with a team of nine experts sourced from the private banks. The study had identified major findings in relation to the liquidity constraints in the banking industry. In the study, the mandatory 27pc bond bill coupled with its long maturity period stood among the findings that impacted the liquidity of banks.

It is very vague to say the impact of the NBE bill is the cause of the current stress of the banks, as the bill was ongoing for the last nine years, argues Abdulmenan Mohammed, a financial expert with close to two decades of experience.

In the first quarter of the current fiscal year, 39.6 billion Br was disbursed in fresh loans, which indicates a 31.8pc growth from the same period last year. The share of state-owned banks was 29.5pc, and that of private banks was 70.5pc.

The study showed that the banks were purchasing NBE bills on average at an equivalent to 42.7pc of their outstanding loans. The maximum amount was registered in July 2016 at 52pc, and the minimum was about 33.7pc in December 2019.

“We had requested to access our reserves with the NBE to address short-term payment obligations in our payment and settlement account, discount our assets and repay at least one-year of our NBE bills as a short-term solution,” said a senior bank official at one of the private banks.

“It’s a long-overdue move from the regulatory body to release the bills. Although the amount will be small, the banking and the inter-banking market will be hastened in a certain way,” added the official.

The NBE bill also consumed, on average, 29.3pc of deposits collected by banks. This is an indication that the NBE bill had reduced the liquidity of banks, according to the senior banker.

“By assessing the loan collection of the sector from April to June and operational expenses taking into account the shock of the COVID-19 outbreak, we assumed 15 billion Br to be adequate,” said a source close to the case.

“There is also the concern on the rise of the inflationary bar due to the injection of the cash, which can’t be ignored, as any cash injection will affect the small economy of the country,” said the expert.

The liquidity of the banks wasn’t only impacted by the NBE bond, but also since August 2019, net foreign assets have registered negative growth, which might be an indication for the sale of foreign currency reserves to the market.

In the last six months, the country’s net foreign assets were depleted by 73.4 billion Br. This suggests the National Bank of Ethiopia collected the equivalent from the market, and it may not go back into the market again if the foreign assets are sold in a local currency, according to the study.

“This is a completely wrong statement from the Bank's study. There was a sale of forex but not to this magnitude, and it was immediately offset," said the source close to the case.

The reduction in international reserves was accompanied by an increase in other assets, which must have been due to the forex that was sold to CBE, similar to what was done a few years ago, argued the expert. He added that the research has completely assumed that the international reserves were sold in cash using the payment settlement account, which isn’t true because credit sales will not reduce the liquidity but in fact actually improves the liquidity of the banks.

“It’s a very arguable computation, as it was compared by a month only, it should have looked at the expenditure of the government for the last six months, hence, the computation method should be looked over again,” said the source close to the case.

"The release of the NBE bills is a very timely decision by the government; and there might be a scenario where due to the panic caused by the Coronavirus, people might take cash out of the banks for security, so the banks should prepare for those kinds of scenarios,” said the expert.

The economic stimulus package also called for banks to give priority for importers that import goods to combat COVID-19 like ventilators, sanitary goods and medical equipment, including testing kits, when providing forex.

“With our current reserves, we are overly committed, and it’s very hard for us to obtain forex without economic activity. From the little income we have, surrendering 30pc of forex is a nightmare, and we have requested these kinds of legal frameworks to be loosened in these dire times,” said senior bank executives at one of the private banks.

"It is a very legitimate question, and the government is working toward the mobilisation of forex through development partners, it will be difficult to let go of the 30pc forex, as it is very important for the import of fuel and medicine," according to the source close to the case.

"It’s true there is very high pressure on the commercial banks, and if the regulatory body can decrease the amount to at least 18pc, it will ease the burden for the banks, according to the expert.

Central Bank Generates 33.4b Br from T-Bill
Share this...