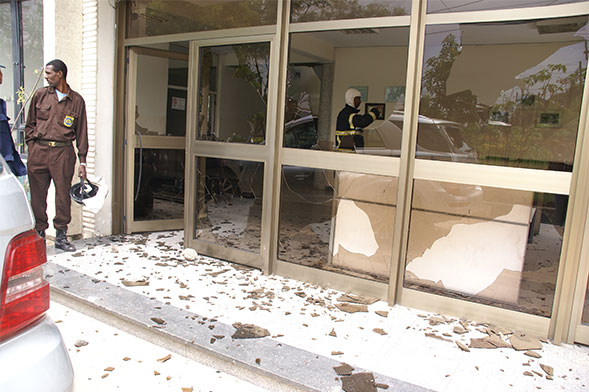 The New Wing Addis Shoe Factory in Aqaqi Qality was attacked by a mob causing damage to its building.

New Wing Addis Shoe Factory, a Hong Kong shoemaker, has ceased operations after experiencing a mob attack by residents in the area and after being suspended by the City Administration.

A group of residents occupied the factory on the morning of June 1, 2019, after arriving by motorbikes and Bajajs. They attacked the guards, damaged three cars and assaulted the buildings with stones and other objects.

The residents of Aqaqi Qality District, where the company is located, went on the attack after the company was accused of causing a fire accident in the area. On the same date as the attack, the fire had presumably started at the company compound and spread into the local area, damaging some properties, which angered the residents.

The damage the company suffered is estimated to be over 5,000 dollars, according to Evano Mesfin, deputy manager of New Wing.

The Chinese factory was established in 2011 with a production capacity of making 3,000 pairs of women's shoes a day. In the last fiscal year, the company generated 3.6 million dollars from exports.

"The residents of the area have also been complaining about the smell coming from the factory and air pollution," said Evano.

On the same date of the fire accident, the City's Environmental Protection & Green Development Commission suspended the company from operating. Signed by Commissioner Alem Assefa, the letter told the managers of New Wing to suspend operations until investigations of the cause of the fire are completed.

Police at Woreda Six Saris Area Police Station confirmed to Fortunethat the case has been transferred to the Aqaqi Qality Police Station, where the investigation is continuing.

New Wing, which operates two plants in Addis Abeba in Qality and Saris, employs 1,700 employees and has been generating between half a million dollars to 600,000 dollars a month from the export of its products to the United States.

Following the attack, the company submitted grievance letters to the Office of the Prime Minister, the Ethiopian Investment Commission, the Addis Abeba Environmental Protection Commission, the Leather Industry Development Institute (LIDI), the Ministry of Trade & Industry and the Federal Police Commission among others.

"The security issues in the area are very dangerous to resume operations," Evano told Fortune.

The Ministry of Trade & Industry is working to hold a meeting between the management of the factory and the residents of the area in the presence of officials from LIDI and the Investment Commission, according to Teka Gebreyesus, state minister for Trade & Industry.

"We hope the discussion will solve the problem the company has with the local community," Teka told Fortune.

Two years ago, New Wing was one of the companies that were shut down for a week by the city's Environment Protection Commission for discharging effluent chemicals. It reopened its doors after building a waste treatment plant for 18 million Br.

Yacob Arsano (PhD), a political expert specialising in conflict resolution and a university professor for over 35 years, believes that the way the local community proceeded to defend themselves was not right.

"Even though it is established that the company caused damage to the local residents," said Yacob, "the community should approach the case legally and properly."

Yacob also says that such kinds of mob attacks from the different groups could erode the rule of law and justice in the country. Yacob also suggests the government focus on addressing such issues.

New Wing is one of the 22 private shoe export factories in the country in addition to 300 small and medium-size shoe and leather product enterprises. These shoe companies have generated one-fifth of the 130 million dollars of total export earnings in the past fiscal year.