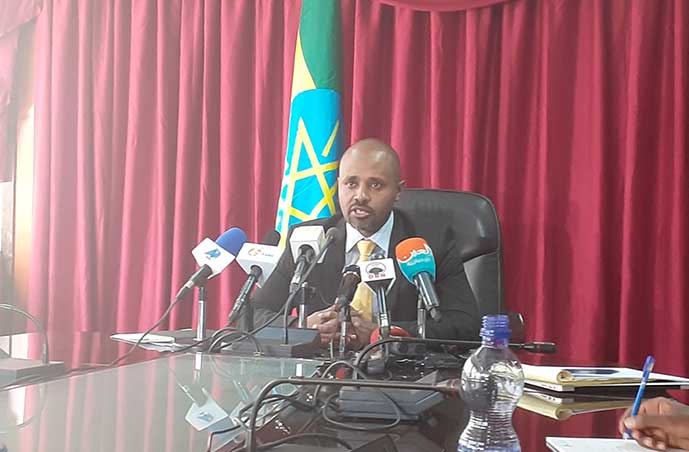 State Minister for Finance Eyob Tekalign (PhD) gave a press briefing last week about the transaction advisor the Ministry is looking to hire for the partial privatisation of Ethio telecom.

The government took the first step of the partial privatization process of Ethio telecom last week by announcing its search for a company that will consult on the transaction procedures.

To hire a company for the project, the Ministry of Finance has requested expressions of interest from interested bidders who will oversee the process and shepherd it from pre-preparation to final endorsement.

The advisory, which is expected to last for an estimated period of 14 months, will consult on the feasible mode of privatisation, suggest basic terms and conditions of the partial privatisation process, financial and accounting preparation for the pre-privatisation phase and recommend the percentage of capital to be put on sale.

In addition, the consultant will undertake legal due diligence, identify bidder selection criteria, support the bid preparation, as well as assist in partner selection and negotiation.

For the bid evaluation process to select the advisory firm, a five-member committee was formed. The members are composed from the Ministry of Finance, Ethio telecom and the Public Enterprises Holding & Administration Agency, and it will be chaired by Beyene Gebremesqel, director-general of the Agency.

The winning advisory firm that is expected to begin work starting from November 1, 2019, will base its recommendations on the asset evaluation of Ethio telecom, which is currently being conducted by KPMG East Africa.

KPMG East African, based in the Kenya, was hired last August by the state telecom giant for one million dollars and is expected to finalise the asset valuation by the end of October 2019.

The Ministry is also drafting an expression of interest document for an advisor that will oversee the process of letting two international operators join the sector to operate with Ethio telecom.

The two new operators are expected to join the Ethiopian market by the fourth quarter of the new fiscal year and will begin operating simultaneously with the new partially privatised Ethio telecom, according to Eyob Tekalign (PhD), state minister for Finance.

“The privatisation process is neither fast nor slow and is following the intended schedule,” said Eyob.

Ahead of opening the sector for foreign investors, the government is working on strengthening the institutional and human capacities of Ethio telecom and other regulatory bodies, according to Eyob.

Before the parliament went for recess, the lawmakers legislated a bill that formed an independent telecom regulatory body, the Ethiopian Communications Authority.

The Authority, which will be mandated with administering, monitoring and enforcing the telecommunications regulations and issuing telecom licenses, received Balcha Reba, former director of the Communication & Information Technology Standardization & Regulation Directorate under the Ministry of Innovation & Technology, as director-general.

Since June 2018, when the Executive Committee of the ruling EPRDF coalition decided to partially and fully privatise giant state-owned enterprises, the Ministry of Finance has been working on the process.

Ethiopian Airlines, Ethio telecom, Ethiopian Shipping & Logistics Services Enterprise, Ethiopian Electric Power and 13 sugar factories are among the companies to be privatised with the new reform process. Railways, industrial parks, hotels, energy and manufacturing plants are also on the list.

The Ministry gave priority for the privatisation process of sugar factories and is currently evaluating the expression of interest from 10 companies that showed interest in buying the companies.

Except for the privatisation of Ethiopian Airlines, the Ministry has progressed in the task, which has kept its hands full, according to Eyob.

Yihenew Wondie (PhD), a lecturer at Addis Abeba University and an expert in the communications sector, says that overseas advisory firms could secure the project.

“Due to the previous expertise requirement of the role," said Yihenew, "we'll mainly see foreign companies vying for the project."

But Yihenew says that the international companies would also be challenged with the task.

“Most of the work these companies have done is in mature economies and within different settings,” said Yihenew. "The case of Ethiopia and Ethio telecom will bring them new challenges."

First Talent Academy to Enroll Youth out of School