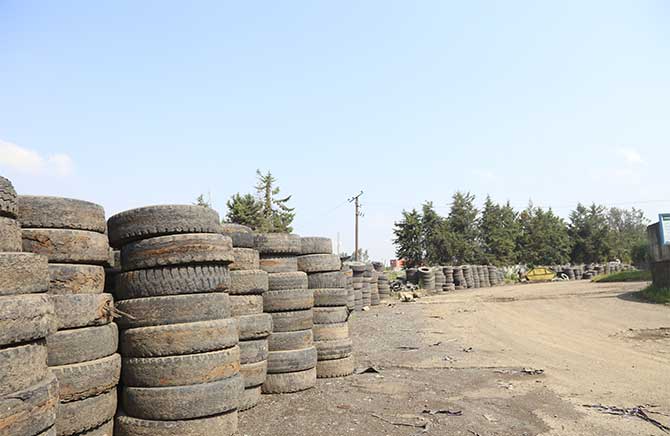 The plant will be built inside the Enterprise’s Qality Branch, Akaki Qality District, where the Qality Customs Branch Office is located.

The Japanese development agency has approved a project proposal that aims at establishing a tyre retreading plant in Ethiopia.

Japan International Cooperation Agency (JICA) accepted the project proposal that was submitted by Fukunaga Engineering Co., Ltd, a Japanese firm, to set up a tyre retreading plant on the premises of one of Ethiopian Shipping & Logistics Services Enterprise's locations.

The plant will be built inside the Enterprise's Qality Branch, Akaki Qality District, where the Qality Customs Branch Office is located. At that location, thousands of old and used tyres have been dumped.

Estimated to cost up to 40 million Br, the plant will have a capacity of retreading - or putting a new rubber surface on the outer part of a worn tyre - 50 tyres a day.

For the implementation of the project, Fukunaga, the Enterprise, the Ministry of Trade & Industry and Ethiopian, Chemical & Construction Inputs Industry Development Institute signed a memorandum of understanding last April. The parties have been waiting for JIKA's - the financier - approval of the proposal.

Last week, Fukunaga’s proposal was accepted by JICA, according to Sara Sem, communications officer at JICA, which has been in Ethiopia since 1993 and currently has 29 ongoing projects, with 11 of the largest in agriculture, eight in industrial development, eight more in infrastructure and two in education. Between 2010 and last year, JICA disbursed nearly 5.4 billion dollars worth of grant aid and technical cooperation.

''We expect the pilot phase of the project to begin in January or February of 2020, tentatively,'' she told Fortune.

Fukunaga, a company that was established in 1994 with headquarters in Osaka, Japan and a metal recycling plant in Vietnam, will import five sets of different machinery and install them at the warehouse to be prepared by the Enterprise. The Enterprise will build a warehouse and secure power supply for the plant. The machines perform multiple tasks, including the initial inspection and the final moulding stage.

After the worn tyres are collected, the workers will select suitable casings for retreads and send them through a rigorous visual inspection process. Those that pass the inspection stage will be sent to buffering and then repairing. Cementing the injury by vulcanising rubber stems to fill the damage is the following stage.

During the three-year project, Fukunaga will import the machinery from Japan, install them and train the Enterprise's staff who will be working at the plant. The Japanese company will manage the plant for three years, and then it will be fully transferred to the Enterprise.

Fukunaga will provide technical assistance for the project, while the Enterprise will own and operate the plant, and the Ministry of Trade & Industry will promote tyre retreading and recycling technology in Ethiopia. Fukunaga will also train two employees who will work at the plant in Japan.

Data shows that only five percent of the tyres in the country are retreaded and most of them are disposed of, though many can be treated and reused.

''We hope to push this figure as high as 20pc,'' said Keiichi Furukawa, executive officer of Fukunaga Engineering.

The Enterprise's trucks have 24 tyres. It changes tyres every six months, and sometimes every three months, costing it a considerable amount of foreign exchange to import tyres.

''The retreading will extend the life of the tyres by 40pc,'' Roba Megerssa, CEO of the Enterprise, told Fortune.

The Enterprise is currently in the process of procuring 150 heavy trucks and 12 car carriers, which could cost it as much as one billion Birr.

Upon completion and becoming operational next April, the plant will be the 11th tyre retreading plant in the country. The largest plant, Etretreading Plc, has a capacity of treading about 3,000 tyres a year.

Fukunaga also plans to invest in Ethiopia, setting up recycling plant that will recycle completely worn-out tyres and make car speed-bumps from the recycled rubber, according to Furukawa.

Etherbal Set to Build a Plant