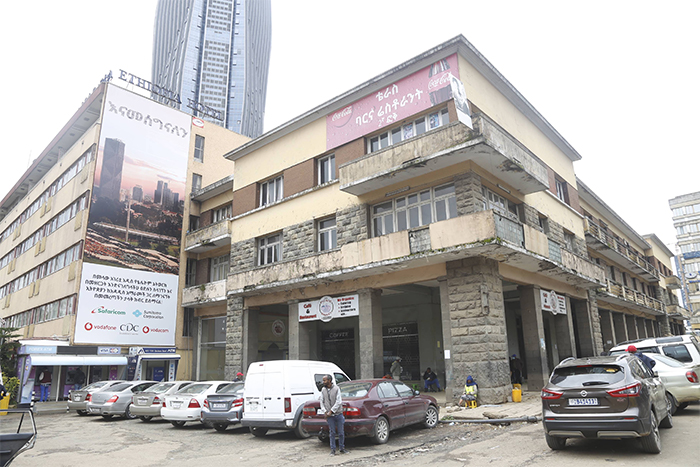 One of these is the Bego Adragot Building, constructed during the five-year Italian occupation in the 1930s.

Landmark sites off Churchill Avenue, including an 80-year old structure in the National Theatre neighbourhood, are to be demolished after six years of dispute over the historical value of the properties.

One of these is the Bego Adragot Building, constructed during the five-year Italian occupation in the 1930s. It has housed well-known commercial entities for decades, including Shi Solomon Supermarket, Lion Bar, Yohanis Jewelry, and the Picnic Basket Restaurant.

Under the ownership of the Federal Housing Corporation, some of these tenants paying up to 70,000 Br in monthly rent have had to close down and move elsewhere since the start of the dispute with the Belayneh Kindie (BK) Group, the business conglomerate that has acquired Ethiopia Hotel from the government.

The Group is kicking off expansion project, incorporating properties laying right behind the hotel for which the Corporation was paid compensation. After the Group acquired the Hotel from the then Ethiopian Privatisation Agency in 2010 for 94 million Br, the expansion had been on the drawing board.

Under the watch of former Deputy Mayor Takele Uma, now serving as Minister of Mines & Petroleum, the Addis Abeba City Administration gave the go-ahead to the BK Group three years ago, a decision which had already been made by the previous administration but had failed to materialise following challenges to the expansion plans. Advocates, including some of the tenants, urged the federal government to register the properties set to demolish as heritage sites.

Ethiopia Hotel, operating since 1963, was built during the Imperial era to host delegates who came to Addis Abeba for the inaugural summit of the Organisation of African Unity (OAU). It will be demolished to make way for the BK Group's ambitious plans to replace it with a five-star establishment.

The Group is under the family of Belayneh Kindie, a graduate of a military cadet course in the late 1980s. He got involved in the grain trade before making his name with the export of cash crops such as sesame and coffee. Recently, he opened an industrial scale edible oil processing plant in the Amhara Regional State, inaugurated by Prime Minister Abiy Ahmed (PhD) and his deputy, Demeke Mekonnen.

BK Group runs a portfolio of 22 companies engaged in exports and imports as well as construction and manufacturing, employing close to 3,000 people.

The Group's managers appear to be unconcerned with the historical value of the building, claiming that their expansion will be of more value.

"It's so dilapidated and old, although located in a prime area," said a senior manager from the Group. "As hospitality service providers, we need to enhance the country's image through developing a world-class hotel property."

The Group plans to expand the 4,000sqm Ethiopia Hotel to a posh property surfacing on 5,500sqm land. It has obtained construction permits from the City Administration. The BK Group initially planned to erect a new 63-storey building on the land but is currently revising the design, citing that the edifice needs to match the surrounding financial district better.

"We've been paying the lease for over four years," he said of the plots incorporated into the company.

Tenants of the building the Group moved on to demolish for expansion of Ethiopia Hotel were galled, appealing to the city officials and authorities at the Ministry of Culture to preserve the site.

The Building has been registered by the Culture & Tourism Bureau under Qirqos District as a heritage site since 2019. It was a decision challenged by the Federal Housing Corporation, whose officials believe a building needs to be over a century old to make it to the registry of the heritage sites.

Alula Pankhurst (PhD), social anthropologist and member of the Ethiopian Heritage Trustee Board, says the age of the building and its architectural design showcases classic Addis Abeba architecture.

"Demolishing the building is not the thing I support," Alula told Fortune. "I suggest that the hotel owners manage their space and work on renovating the building, adding more features."

For Amanuel Teshome, president of the Association of Ethiopian Architects, demolishing such historical buildings causes a loss of sense of place and identity.

"All I see is the spontaneous decision as opposed to deep professional consultation," he said. "It's a regrettable failure of the City Administration to allow developers to care only about their investments while overlooking the importance of the property that they want to capitalise on."

One former tenant expressed dismay at the unfolding events and the City Administration's decision.

"Demolishing the Bego Adragot Building will have a significant impact on the community and on those who depend on it to generate livelihood income," said the tenant.

Rising Cost of Living In Addis

George Floyd Introspective, All the Way from Addis