Ethiopia’s export performance, which has been declining for the past three years, generated 723 million dollars in the first quarter of this fiscal year. This is a 15pc increase from the same period in the last fiscal year, writes TEMESGEN MULUGETA, FORTUNE STAFF WRITER. 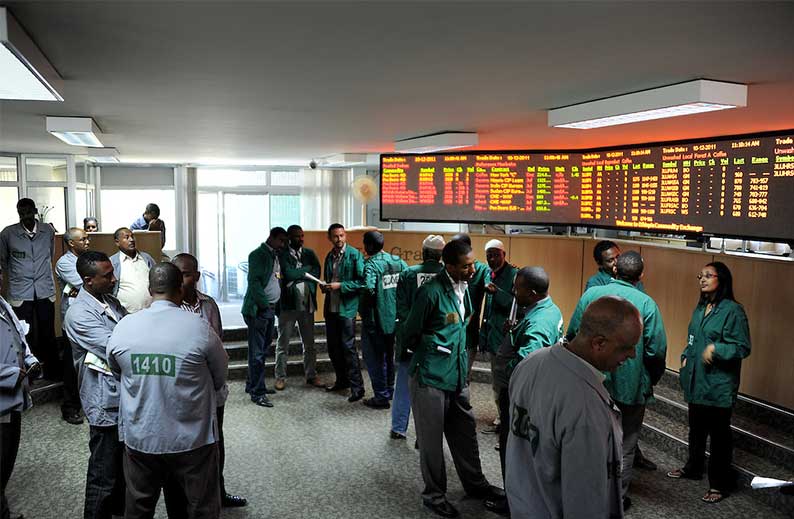 Traders stand on the floor of the Ethiopian Commodity Exchange ready to trade agricultural products.

Tibebu Roba, a farmer in his mid-50s, has spent much of his career trying to stay one step ahead of the ever complicated coffee production and export business.

Born and raised in Dilla town of the Gedeo Zone, 295Km south of the capital, he finds himself in one of the well-known coffee producing areas in the country after inheriting land from his father.

The father of six children continued with the family tradition of coffee planting. But unlike his ancestors, he uses new breeds of coffee seeds on the eight hectares of land he owns.

Until last year, he would supply the coffee seeds he harvests to the Yirgacheffe Coffee Farmers’ Cooperative Union, which was established in 2002 with 13 member organizations. The Union then exports the coffee and pays the farmers dividends based on the amount they supplied. Tibebu, whose only source of income is his coffee, was never happy with this arrangement.

Last year, he decided to do away with a middleman. He supplied coffee to Trabocca, a 15-year-old Dutch company that provides traceable coffee products to roasters around the world. Last year, the company bought 184ql of coffee from Tibebu.

“Previously, there were a lot of brokers in the chain that benefited more than us,” said Tibebu, who is now building a new house for himself and his family. “Before I started exporting directly, I used to sell my coffee to private buyers, who used to give me low prices.”

Like Tibebu, coffee farmers have lately found themselves in a better position, but it has not only been due to them exporting directly. One of these is Alemu Kebed, a resident of the Southern Guji Zone of Oromia Regional State.

Operators trade agricultural commodities at the Ethiopian Commodity Exchange (ECX), which generated 723 million dollars in the first quarter of the year.

A married father of five, he is the chairperson of Harda Hurde Cooperative Union, an association of coffee farmers established seven years ago.

Alemu and 710 members of the cooperative union supply their coffee to the Oromia Coffee Farmers Cooperative, the largest coffee growing farmers union. Last year, they supplied 4,175 sacks of coffee to the Union. Alemu sold a kilogram of high-grade coffee for 50 Br last year.

"The major challenge is the inconsistency of the international price of coffee,” says Alemu, who admits that avoiding some of the brokers in the middle can help boost revenue for the farmers.

The coffee industry, which supports 818 coffee exporters and 5.3 million coffee farmers who cultivate 1.6 million hectares of land, has not merely been good for farmers but the national economy as well, boosting export performance of the first quarter of the year to 723 million dollars, the first increase in three years. Last fiscal year, the nation generated 2.7 billion dollars from exports, a six percent decline from the year before and well below the 4.3-billion-dollar target.

With 128 export destinations, the performance was 15pc higher compared to the same period in the previous fiscal year and satisfied 90pc of the government’s target for the quarter.

The Netherlands was the biggest export destination for the country, buying 82 million dollars worth of goods from Ethiopia. The European nation was followed by Somalia, the United States and Saudi Arabia as the top export destinations.

Seventy-six percent of the export revenue is owed to agricultural commodities, the most important of which has long been coffee. The commodity fetched 284 million dollars in the first four months of the fiscal year, with Germany buying almost a quarter of the coffee Ethiopia exported. Saudi Arabia and Japan were the other top destinations of Ethiopian coffee.

Traders stand on the floor of the Ethiopian Commodity Exchange ready to trade agricultural products.

The higher export performance of coffee is owed to the diversification of market destinations, including Russia and Asian countries, good promotional work and improved regulation of the coffee trade chain, according to the Ethiopian Coffee & Tea Development & Marketing Authority.

“The institutional reforms applied to our institution played a significant role in contributing to the export performance,” said Shafi Umer, deputy director of the Authority, which gave 51 new licenses to export roasted coffee last fiscal year.

The Authority issued a warning to 266 exporters, while it revoked the licenses of 86 exporters last year due to price cutting. Similarly, the Ministry of Trade & Industry attempted to filter out exporters engaged in the export of coffee for the primary purpose of generating foreign currency earnings, a situation which undercut the price of Ethiopian coffee.

“We have also applied business contract administration and export license auditing in an effort to address the revenue downturn,” says Wondimu Filate, head of public relations and communications affairs at the Ministry, explaining why performance has improved this year.

But players in the coffee value chain, more than middlemen, price cutting exporters or illegal dealers, blame inconsistency in the international price of coffee as their main woe.

The global price of coffee has been in a state of fluctuation for the past 13 years. While rising to as much as 2.87 dollars for a pound of coffee in 2011, it fell to as low as 0.89 dollars back in May of this year. The price stood at around 1.14 dollars in the past week.

There are myriad reasons why the price has been changing frequently, although the decline in the prices of commodities beginning in the early 2010s has to do with the after effects of the 2007/08 financial crisis. Last year, the price of coffee saw a dip in the international market following political uncertainty as a result of general elections in the world’s largest producer of coffee, Brazil.

The effect of the fluctuation on export revenue is best illustrated by the four-month performance of coffee in this fiscal year. While Ethiopia exported 100,452.5tn of coffee, which is 104pc of the government’s target in terms of volume, the revenue gained is only 82.3pc of that target.

Alemayehu Geda (Prof.), a university lecturer and macroeconomist, believes that it is very dangerous for the nation to continue to depend on coffee exports and sees no circumstances under which the nation can gain ground in a competitive world market.

"Even value-added coffee exports will not go a long way, since the market is already completely dominated by a few countries," he said. "Best case scenario is that the country diversifies away from the commodity into manufacturing and builds on gains in the tourism sector."

Tibebu, who follows in his father's footsteps and has been in the business for three and a half decades, is finally getting a good income from his farmland. So he plans to diversify his coffee farm toward specialty varieties.

"The only thing that scares me the most is the inconsistency of the international coffee price," he said.

In the World of Hedge Funds, Retain Capital Controls