Revenues from opal exports have been declining for three years 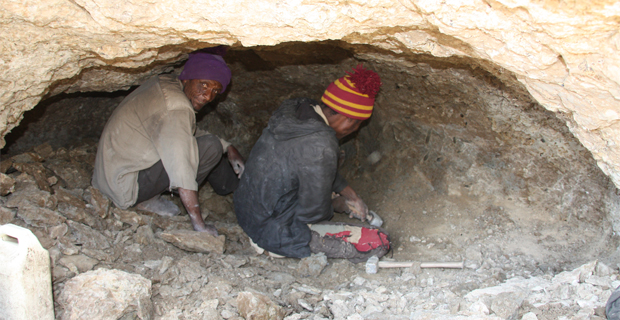 The government has opened the first opal trading centre where artisanal miners trade with exporters in Delanta Wereda, South Wello Zone of the Amhara Regional State.

The government has opened the first opal trading centre where artisanal miners trade with exporters in Delanta Wereda, South Wello Zone of the Amhara Regional State.

Aimed at fighting illegal transactions, benefiting unemployed youth and improving transactions with exporters, the Ministry of Mines & Petroleum launched the opal trading centre on May 11, 2019.

The centre was opened at one of the weredaoffices temporarily until it obtains its own building, according to Argaw Getachew, administrator of Delanta Wereda, which is known for ample resources of high-quality opal. Out of the 31 rural kebeles under the administration, 27 are known for abundant opal resources.

"The regional administration will handle the 10-million-Br budget for the centre and the process of hiring of contractors and consultants," he said.

Offices, trading floors, display rooms, storage, lapidaries and other facilities related to quality control are slated to be included in the new trading centre.

There are 20,000 artisanal miners in Delanta Wereda organised into 27 cooperative unions and small & medium-enterprises. The miners extract opal, one of the 10 types of precious minerals the country possesses including emerald, sapphire, ruby and quartz.

The artisanal miners supply opal to 92 lapidaries, who cut and polish the mineral to add value before export. There are 487 companies who received their competency certificate from the Ministry of Mines & Petroleum and their trade license from the Ministry of Trade & Industry to export the precious mineral. There are also intermediaries, some operating illegally, in the market chain.

The new marketing platform will maintain traceability and mitigate the interventions of illegal brokers and contraband traders, according to Jiksa Kidane, director for the artisanal mining supporting and coordinating department at the Ministry.

Given that contraband has increased in the mining industry, export revenue from opal has been declining since 2016, according to data from the Ministry.

In the past three years, the government has targeted the country to export 1,100Kg of polished opal but succeeded in exporting just two-thirds of that figure, generating only seven million dollars.

Rough opals, which are directly extracted from the mine, are graded at the Ministry before export. There are five grades based on the quality, ranging from A to E, and ranging in value between 750 dollars and 6,000 dollars a kilogram.

For Muluye Shenkute, an opal exporter, the polished ones do not have a high demand in the foreign market.

“They don't fulfill the standard of the market,” he said, “because our lapidaries lack skills and knowledge to compete in the global market, so the buyers prefer to take the rough stones and polish them to their standards.”

Argaw shares the exporter's opinion, saying that the polished opals are no more than dust cleaning and making minor cuts and reshaping.

"They use backward traditional tools that cause wastage of the mineral," said Argaw.

To alleviate the skill shortage, 17 technical training centres have started trainings in the region on value addition of the precious minerals.

An economic geology expert with three decades of experience believes that professionals in the market chain need to get training.

"The cultural production should be improved by providing continuous skill training to the actors in the opal production chain," said Solomon Tadesse (Prof.), a lecturer at Addis Abeba University’s School of Earth Science.

The expert also recommends the city administration work on resource distribution between weredas to prevent conflicts it may cause.

The Ministry is planning to set up other trading centres in Arba Minch and Konso, where precious minerals such as emerald, aquamarine and amazonite are found, according to Jiksa.

Last week legislators approved a new law that will improve the licensing process, impose penalties on illegal exporters of precious minerals, encourage the formation of trading centres and define responsibilities for the Ministry and regional administrations.

“No cogent point for Amhara to stand alone as mere Ethiopian.”