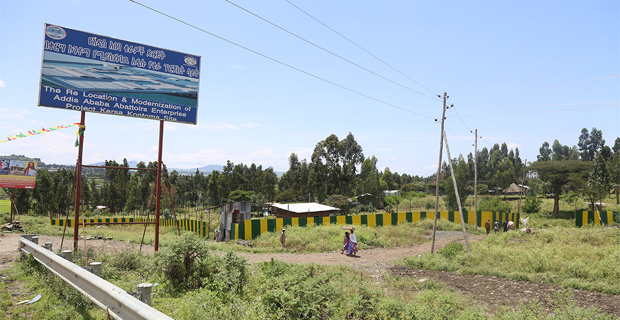 The commencement of construction for the city's newest abattoir, which is expected to cost two billion Birr, has been rescheduled for three years from now, as residents and farmers living on the designated development land in Nifas Silk Laphto District have refused to be relocated.

The commencement of construction for the city's newest abattoir, which is expected to cost two billion Birr, has been rescheduled for three years from now, as residents and farmers living on the designated development land in Nifas Silk Laphto District have refused to be relocated.

The 20ha of land was secured from the City's Land Management Office in 2016 by the Addis Abeba Abattoirs Enterprise. The new state-of-the-art abattoir, originally scheduled to begin construction by the end of this fiscal year near Hana Mariam Church, is part of a plan to replace the existing abattoir in Qera.

Two years ago the city's land management office allocated 100ha of land in Nifas Silk District for redevelopment purpose, of which 20ha was granted for the Enterprise as a slaughterhouse with a capacity of processing 14,000 animals a day.

The city identified 177 households and 52 farmsteads living on the designated redevelopment land who were offered compensation and replacement land, according to the City's land management office. All 52 farmsteads are located on the 20ha allocated for the Enterprise.

The Enterprise, which secured financing for the project from the French Development Agency, has already hired a consortium of consultants and was in the process of hiring a construction contractor. Meanwhile, the residents and 52 farmers on the redevelopment land refused to be relocated, claiming that the compensation they were offered was too low.

"We sent a letter to the city land management office repeatedly asking them to handle the relocation issues," said Nibret Beka, managing director of the Enterprise.

Atomessa Gemechu, a father of three, is one of the farmers who refused to relocate from the area.

In June 2016, the officials of the city land management office informed the farmers to relocate and offered compensation of 82 Br a square meter, according to Atomessa.

"The compensation is too low, and we will be relocating to a remote area that does not have adequate infrastructure," he said.

Yirga Workneh, director of compensation and rehabilitation at the city's land management office, begs to differ, saying that the compensation the city administration offered the farmers was fair.

"We offered them a different area to relocate to, since they refused the first choice, but they still refused to accept the alternative," he said.

Last year, the land management office tried to demolish the homes, but the process was halted after discussions with the city administration led to negotiations, according to Yirga.

Apart from the farmers, there are residents who have illegally built homes on the land without obtaining permits from the city administration, according to Yirga.

The city's manager and the Office of the Mayor, along with the security forces, have formed a committee to work on relocating the residents and the farmers.

In the meantime, the Enterprise has decided to postpone the construction period for three years until after the relocation issue is fully settled, according to Nibret.

"If they relocate everyone before that date, we will start construction," Nibret said.

Girma Seifu, a politician and former parliament member, says that the issues related to land are becoming a crisis on a national level.

To solve the problem, he recommends that the government revise the land policy and the compensation rates that are set for redevelopment purposes.

"On top of that, the government should work to uphold the rule of law," he said. "All should abide by the law."

At the end of last week, Deputy Mayor Takele Uma said that the City Administration will be demolishing "illegally" built homes and structures across five districts including Nifas Silk Laphto, Aqaqi Qality, Bole, Kolfe and Yeka.

"We will start taking actions in the next two to three weeks," said Takele.

Saudi Co. Ahead of Contenders to Build 250MW Solar Project