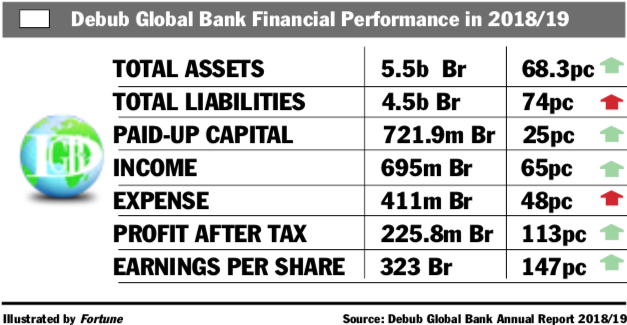 The Bank was able to boost its EPS by more than a double-digit figure as a result of a huge increase in net profit that soared by 113pc to 225.8 million Br. Earnings per share shot up to 323 Br from 131 Br.

Abdulmenan Mohammed, a financial analyst with close to two decades of experience, commends the management’s decision to bring the EPS of the Bank on par with the industry average.

Tesfaye Botu (PhD), president of Debub Global since July 2019 after replacing Addisu Habba, attributed the huge increase in profit after tax to the increase in interest income and deposit mobilisation.

In the reported period, the Bank's earnings from interest on loans and advances and NBE bonds reached 331.7 million Br, registering a 51pc growth. It also gained 76.6 million Br in foreign exchange dealings, which increased by 51pc.

“Achieving such an increase in gains on foreign exchange dealings is amazing in an area of business with tough competition,” said Abdulmenan.

Members of the Board of Directors and the top management team of Debub Global Bank discuss results with shareholders at the annual assembly held on December 14, 2019, at Millennium hall.

The Bank also registered a marked increase in fees and commission income, which rose by 102pc to exceed 275.8 million Br.

The restructuring implemented in the top management of the Bank and the expansion of the marketing department has contributed to the positive gains, according to Nuredin Awol, the chairperson of the board of directors of the Bank, which was established seven years ago and whose shareholders exceed 11,000.

It also employed a close follow up by the board members to help attract big shareholders in the business sector who were instrumental in increasing the foreign exchange earnings, according to Nuredin.

Parallel to the income spike, the Bank witnessed a considerable expansion in expenses. Interest expenses shot up by 80pc, exceeding 144 million Br associated with the massive growth in deposits.

Expenses for salaries and benefits also increased by almost half to 125.7 million Br, with general and other operating expenses swelling to 123.3 million Br, showing a 19pc increase.

The expert cautions that the growth of salaries and benefit expenses needs attention from the management of the Bank.

However, Tesfaye, relates the expense spike with the growth of the Bank. Branch expansion along with its associated costs such as office rents and salary payments for the new employees caused the expenses to swell, according to the president.

Debub Global increased its number of branches by 14 in the last fiscal year to reach a total of 57 branches.

Loans and advances the bank disbursed increased by 68pc, while deposit mobilisation grew by 55pc, exceeding 3.5 billion Br in the reported period.

“Despite the reduction, the ratio is good,” Abdulmenan noted. “There is some room for improvement.”

The Bank increased its provisions for loans and other assets by 75pc to reach 18.2 million Br.

“Despite the growth in the provision for impairment of loans and other assets being high, it is still reasonable,” Abdulmenan remarked.

Considering the high level of liquidity, the expert suggests the management of the Bank invest some of the liquid resources in income-generating activities.

Tesfaye partially agreed with the expert’s remark but also pointed out that part of the liquid assets were held in foreign currency that could not be readily invested in other areas of investment.

Debub increased its paid-up capital to 721.9 million Br, a 25pc increase from the earlier year.

Though the capital adequacy ratio (CAR) of the Bank showed a decline by eleven percentage points to 30pc, the Bank still had a much higher CAR than required, the expert noted.

Dejene Armeno, a shareholder of Debub Global Bank and owner of Pyramid Construction, expressed his satisfaction with the current performance of the Bank compared with the preceding fiscal year's.

"Though the Bank is competing well with other banks, it needs to work more to improve its standing in the industry," Dejene told Fortune.

Industry in Disagreement Over Paying For Premier’s Flagship Projects

Legislative Reform to Pave the Way for Fertiliser Blending Industry