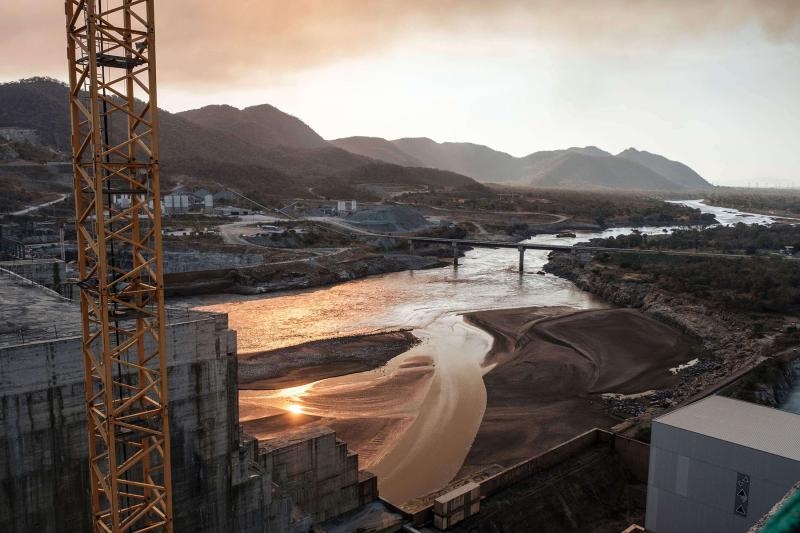 Cyril Ramaphosa, the current chairperson of the African Union and president of South Africa, is expected to resolve - this week - the points of divergence that Ethiopia and Egypt failed to settle over the Grand Ethiopian Renaissance Dam (GERD).

The trilateral negotiation over the Dam was resumed two weeks ago involving the African Union as a lead negotiator. Ramaphosa, who was twice arrested for his involvement in politics while he was a student and has a wide ranging business and academic background before he held strong positions in South Africa's political sphere, is handling the issue and is expected to pass an amicable resolution.

Yet the negotiating countries fail to see eye to eye on four major legal and technical divergence points: future development on the river, conflict resolution, third party involvement during disputes, and data sharing.

The Egyptians want any future development involving the Nile River to be subject to their approval, which Ethiopia finds hard to swallow. Egypt also requires a binding arbitration agreement to be signed as a way to resolve future conflicts. The Egyptians demand that Ethiopia agree to their proposal of opening an Egyptian office at the Dam to directly monitor its operations.

Ethiopia in turn demands Egypt share information and data in relation to water usage in their territory for both hydroelectric and irrigation dams. With the latest negotiations, the two countries are stuck on these points of difference and have thus far failed to reach an agreement.

"The current negotiation also appears to be failing since the outstanding issues are major differences of the two countries," said a source who is well aware of the negotiation process.

Ethiopia launched construction of the five-billion-dollar hydroelectric Dam almost a decade ago, aiming to increase the nation's access to power and to support the economy from the revenues generated from power export. However, Egypt has expressed fears that the Dam will threaten water supplies, which feeds its agriculture and economy.

The countries have ended up locked in years of negotiations and turmoil in relation to water filling and operations of the Dam. In the legal aspect the Egyptians have been pushing hard by saying that the 1959 agreement should remain in place. They have also advocated that the Dam should not hold more than 14 billion cubic metres of water at a time.

What keeps Egypt up at night is Ethiopia's refusal to recognise a single cubic metre of water quota to be allocated to Egypt throughout all the stages of negotiations, according to a hydro expert who wanted to remain unnamed.

Since the kick off of discussions, the countries along with Sudan have been negotiating on six major discussion areas revolving around legal, technical, operational and filling issues for years in a series of discussions. They have managed to agree on a lot of things, but the crucial questions of how and when to fill up the Dam and how much water it should release remain unresolved.

The last negotiations that were held in Washington, DC with the involvement of the United States and the World Bank focused on water filling and operations of the Dam as well as drought mitigation. Ethiopia says that in the second year of filling, it will release a minimum of 31 billion cubic metres through the GERD, which the Egyptians want to push to 40 billion cubic metres.

"During the negotiations that took place in the United States, the Egyptians were hoping to get a minimum 47 billion cubic metres of water in the name of a binding agreement that would protect against prolonged drought years and repeated dry seasons," said this expert. "This is almost a natural flow."

After the talks in Washington, DC failed, Egypt took the issue to the UN Security Council, claiming that Ethiopia's move could potentially destabilise the region. The case is now being handled by the African Union, which hopes to bring about an amicable solution.

In the meantime, Ethiopia has completed over 70pc of the construction of the Dam and is now bracing itself to start filling it with water followed by early power generation using two turbines.

Even though the gate of the reservoir is not closed, the Dam is currently catching water since only one third of the water is flowing under the culvert and the remaining is going into the reservoir. Currently, it is holding 1,770 cubic metres of water a second, and the amount is expected to reach 3,000 cubic meters a second when the rain gets heavier, according to experts.

"The Dam will be filled with water and the next point of discussion will be about releasing water from the reservoir," said the expert. "This will help Ethiopia shift the terms of the negotiation to annual operations and demonstrate that the water filling doesn't harm Egypt."

The last aim of the Egyptians is to take the issue back to the UN Security Council and pressure Ethiopia to agree to a higher water quota, according to the expert.