For about six months at this point, commuters have been forced to deal with longer queues for public buses and higher fares due to the policies taken by the government to fight COVID-19. Now the capital's Transport Bureau has asked the COVID-19 National Ministerial Committee to withdraw the policies in order to reduce transportation congestion, reports HAGOS GEBREAMLAK, FORTUNE STAFF WRITER.

A lot of commuters stand in a long queue to wait for minibus taxis in Arat Kilo to go to Sidist Kilo, Shiro Meda or Ferensay Legasion areas.

Dawit Adugna, in his mid-20s, works at a restaurant located near Mexico Square, almost 10Km away from where he lives in Ferensay Legasion. He earns 2,000 Br each month and an average of 1,500 Br from tips.

Dawit was an engineering student at the Addis Abeba Institute of Technology before he dropped out three years ago to look for job opportunities to help himself and his family. He finally settled on working as a waiter. He then aspired to continue his education along with his work.

After he started working at the restaurant, he wanted to divert into studying business from engineering.

“Since I was hired as a waiter," he said, "I've become more and more interested in the business sector."

He then decided to continue education in a business-related field hoping that one day he could operate his own business and succeed.

Life went on as usual for him until the onset of Novel Coronavirus (COVID-19). He was going to class while also working at the restaurant. He used to get an average of 2,000 Br from tips before the pandemic, which has battered all businesses across the globe.

After covering all his basic needs, Dawit was studying business management at a private university, paying 6,000 Br in tuition each semester.

Dawit also pays 1,500 Br in house rent each month. He does not spend money on food since his employer serves him three meals a day. His other expense is transportation.

The pandemic, which has infected over 27 million people and killed close to 700,000 people worldwide, has not only affected the income he used to get from tips but has imposed other burdens as well. He spends long hours on public transportation, which currently costs double the pre-pandemic rate.

Transportation fees were doubled after the government decided that public vehicles had to be restricted to half of their loading capacity in order to curb the spread of the virus, which was first reported in the country in mid-March 2020.

He used to spend 16 Br to 20 Br a day for transportation to and from his home and workplace. He travels through two or three corridors. But now he is spending 35 Br a day on average. He sometimes uses a contract taxi for around 100 Br so as not to be late to his workplace.

Dawit spends on average an hour to an hour and a half on long queues waiting for taxis. He has to appear at his workplace early in the morning at 7:30am, meaning he has to wake up at 6:00am.

“The crowds at taxi stations are ludicrous, especially in the morning and evening,” he said. “I don’t know what to do.”

Dawit says the situation gets worse during evenings since the number of taxis that provide public transportation service declines significantly after sun down. To catch a taxi he has to walk to different taxi stations in the evening. He sometimes walks from Mexico down to Stadium, Estifanos and other taxi stations hoping to find a taxi.

“Walking during the night is also frightening and not safe,” he said.

Dawit shares these challenges with the 2.7 million residents of Addis Abeba who use public transport. The latest problem has only added to the existing transportation problems in the capital, which is well-known for its extreme traffic.

For years, Addis has been suffering from a shortage of public transportation vehicles, and long queues at the taxi and public transport stations have become very common sights across the city. But the problem has worsened since the intrusion of the pandemic and the government's reactions to the virus.

The city has a total of 16,118 vehicles that are registered to provide public transport service; however, only 64pc of them are currently operational and serving the 2.7 million residents in the capital.

Adding salt to the wound, these public transport service providers operate at only half of their capacity. The directive at fault was issued by the ministerial council that was formed to execute the state of emergency laws to contain the spread of the virus. Those who offend this law will be fined 5,000 Br. With the new tariff, the city’s shortest fare is three Br and the longest is 12 Br.

Of all operational vehicles, 5,814 and 2,932 are minibuses that operate with Code 01 and Code 02 plates, which are restricted to carrying half the typical number of passengers. The remaining 1,521 operate Anbessa, Sheger, UD and Public Service buses, and they are allowed to operate at full capacity but not allowed to load standing passengers.

Even though the new directive was enacted in an effort to contain the transmission of the pandemic through physical distancing measures, it resulted in unintended consequences by bringing additional problems to urban public transport, according to Aregawi Maru, public relations & communications head at the City's Transport Bureau.

"It introduced additional problems on top of the existing problems," said Aregawi. “The movement of people from place to place didn’t decrease as we anticipated. It rather complicated the already existing problem.”

The new system resulted in long and crowded taxi queues across the capital, particularly during peak hours.

Aster Fiseha, a mother of two who lives in Hana-Mariam, also spends at least 40 minutes to an hour to get into a bus or taxi. She faces trouble every morning and evening when waiting for taxis. She owns a small cosmetics shop in Piassa.

“There's been a transport problem here for a long time," she said. "But the problem for the last five months was very tough."

She spends 30 Br daily, a 50pc increase from the original transport fee. Aster sometimes gets Anbessa or Sheger buses, if she is lucky, at a lower price compared to minibuses.

“But I don’t usually get buses quickly, especially during the evenings," she said." And I have to wait for buses for many hours.”

After spending the day at her shop, Aster goes back to her house in the evening and handles the cleaning and cooking at home on top of taking care of her children. But this has become difficult now.

“When I get to my house in the evening," she said. "I am already too exhausted.”

As a first intervention to alleviate the transportation problem in the capital, the city's Transport Bureau deployed 150 buses that were providing interregional transport services. It also had 50 tourist buses provide public transportation services. Over the last three years, 850 buses joined the sector to reduce the transport problem.

On top of the new decree and lower number of transport vehicles, supervision and control inefficiency contribute to the disruption of the transport system, according to Aregawi.

"We also elongated taxi corridors and established 10 new corridors to reduce the burden," says Aregawi. “This enabled drivers to travel longer distances at a time and achieve fast transportation via the new corridors."

Even after all these efforts, the city's transportation problems were not alleviated but instead became worse. The Bureau understood the gravity of the problem and filed an application to the COVID-19 National Ministerial Committee three weeks ago calling for the lifting of the decree, according to Aregawi.

Pinpointing the public transport problem in the city, the Bureau cited the need to allow minibuses to load 100pc of their seats, according to Aregawi.

“We believe the long and crowded lines may also contribute to the transmission of the virus,” he said. "The decision is pending at the Ministerial Committee."

Shiwaye Mersha, an urban transport lecturer at Kotebe Metropolitan University who believes that the transportation problem of the city is deep-rooted and cannot be solved overnight, says the Bureau should focus on supervision and control to alleviate transport disruptions.

“Next to the shortage of public transport vehicles," said Shiwaye, "the transport disruption is attributed to the absence of efficient deployment of vehicles."

There is public transport traffic congestion in some corridors and shortages in other areas of the city, according to Shiwaye.

Dawit, who is already frustrated with the situation, has decided to buy a second-hand bicycle as a solution.

“I don’t have an ideal option at hand rather than buying the bicycle,” Dawit told Fortune.

Energy Sector, too Much Focus on Hydro

Property Management Flourishes as Sector Gets Professional Makeover
Share this...

The Office of the Attorney General recently withdrew a charge filed against Bochu Sin...

The power vested in the youth to drive economic development is well-founded. China an...

The late Prime Minister Meles Zenawi was in parliament in 2010, taking questions on h...

What most spooked buyers owning a billion dollars of Ethiopia’s Eurobonds was not a...

The AU Fails Africa and Its People Miserably

The feeling of helplessness; the confusion to understand what is unfolding; and the d... 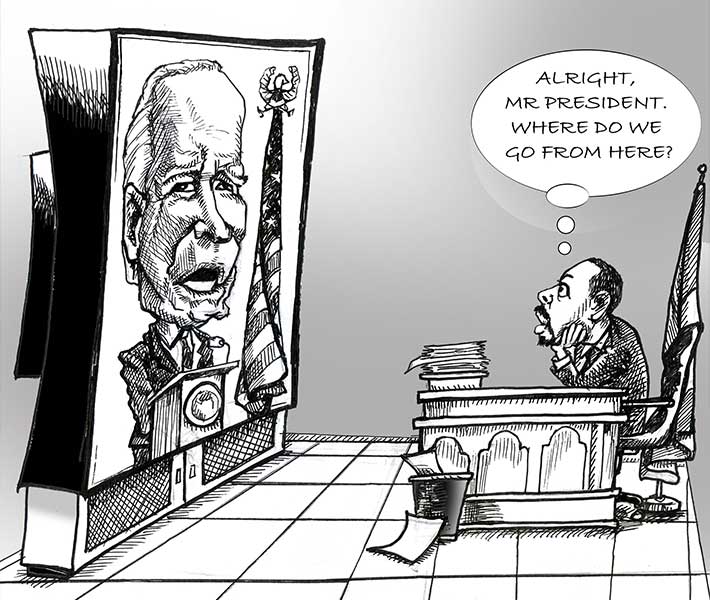 To See Eye to Eye with the Biden Administration

There has been no American envoy serving in Ethiopia who has seen so much within such...

There are many renowned people that I often get nuggets of wisdom from. One of these...

For the rich and well-off, the new fashion is to travel overseas with a tourist visa...

Break the Taboo over Pay Scale

Many people get a job for the sole purpose of making ends meet and would be happy if they never had to work. There are also those, however f...