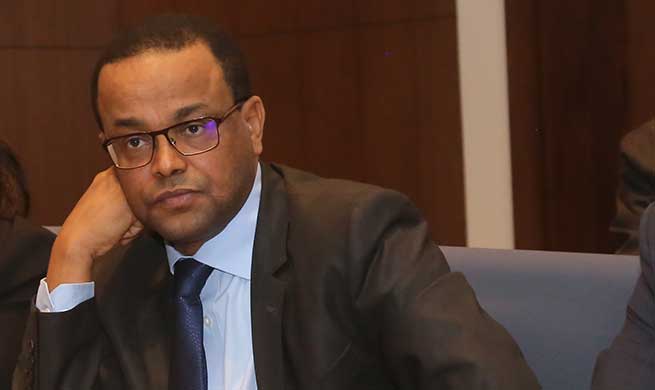 Yinager Dessie (PhD), governor of the National Bank of Ethiopia.

Diaspora international remittance service providers can now open a foreign currency account and maintain foreign currency in retention accounts, according to a new directive issued by the National Bank of Ethiopia.

Signed by Yinager Dessie (PhD), governor of the central bank, and issued on September 2, 2019, the directive allows remittance service providers to hold a foreign currency account, which was previously allowed for non-resident Ethiopians, Ethiopian-born diaspora and export companies.

It is necessary to create an incentive for Ethiopian diaspora to maintain foreign currency accounts at home to encourage domestic investment, according to the directive.

"It will support the international foreign currency reserve and ease the balance of payments problem of the country, and it could encourage foreign direct investment," reads the directive.

While relaxing the requirements mentioned above, the directive tightens the former procedure that allowed a foreign currency account holder to transfer money to another diaspora account.

Account holders can open three types of foreign currency accounts: fixed, current and non-repatriable Birr. Fixed or time deposit takes the form of deposits certified and issued in the name of the depositor. Maturity may vary based on the arrangement made between the depositor and the bank. However, the minimum maturity period is three months.

Under a current account, withdrawals may be made at any time upon demand by writing a check and or a pre-arranged procedure adopted by the opening bank, while non-repatriable Birr accounts take the form of savings deposits that can be used for local payments only. The minimum amount for an initial deposit under a current account is 100 dollars or equivalent to other eligible international currencies.

Fixed account holders have to make a minimum initial deposit of 5,000 dollars or equivalent value of eligible foreign currencies.

A person or a company can open only one current account at one of the authorised banks and multiple fixed accounts in more than one bank. In foreign currency accounts, the money is maintained in dollars, pound sterling and euro. Other eligible currencies have to be converted into the three currencies.

Under non-repatriable Birr accounts, the interest rate will be paid upon negotiation but not less than the minimum savings deposit rate set by the central bank.

In all cases, power of attorney holders are not allowed to open such accounts but can withdraw cash from these accounts.

Abdulmenan Mohammed, a financial expert with 15 years of experience, sees the directive as a move by the central bank to attract foreign currency to the country.

The directive has some incentives for the account opener but has many restrictions that may make the directive ineffective as thought, according to him.

Restrictions on power of attorney holders to withdraw money from the account, the minimum deposit required to open a fixed time deposit account, and opening more than one current account discourage people from opening accounts, according to Abdulmenan.

The Ethiopian diaspora who live abroad may not have an interest in opening a bank account in Ethiopia that is highly restrictive for transaction purposes, according to him.

"The time deposit account is not only restrictive but also has a small interest rate floor that will make it an unattractive investment option," he said. "It seems that the government wants foreign currency and at the same time is scared going in and out of ‘hot money’.”

ZemZem Bank Rises from the Ashes