The firm's earnings per share fell slightly by three percent 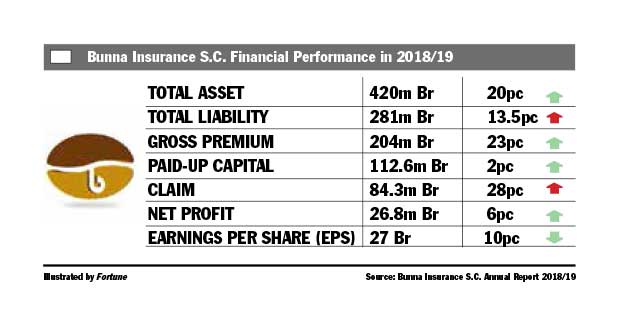 The growth of the profit of the insurer was slow due to increased underwriting surplus, interest income and dividend income.

Earnings per share (EPS) also rose by 27pc,  nearly in line with the preceding year's growth rate of 30pc.

Bunna's paid-up capital increase contributed to the slight decline of EPS, according to Dagnachew Mehari, CEO of Bunna.

Zewdu Minas, a chairperson of the board, proclaims that the insurance firm performed well, despite the challenging situations in the country and the economy.

"The widespread political unrest, serious decrement of premiums in the insurance market, and high level increment of claims payouts were among the challenges," said Zewdu.

The growth of the profit of the insurer was slow due to increased underwriting surplus, interest income and dividend income.

During the reporting period, the underwriting surplus soared by 28pc to 34.5 million Br, driven up by increased gross premium and a rising retention rate that also led to a 28pc increase in claims paid that stretched to 84.3 million Br.

“This reveals that there should be mechanisms for controlling risks,” Abdulmenan Mohammed, a financial statement analyst with about two decades of experience, commented.

Gross written premium increased by 23pc, exceeding 204 million Br, out of which 45.6 million Br was ceded to reinsurers. The retention rate of the company increased by three percentage points to 78pc.

"There is still some room for further increase in retention rate," the expert said.

Revenues of the company have also shown improvements. Interest income increased by 33pc to 16.2 million Br, while dividend income rose up by 24pc to more than eight million Birr.

However, earnings from commission merely declined by two percent to 15.3 million Br. It is despite the marked increase of 37pc in the commission paid to agents that reached 12.7 million Br.

“The increase in commissions paid indicates that Bunna must have faced tough competition,” Abdulmenan remarked. “The firm needs to keep an eye on commission expenses.”

Endalkachew Tesfaye, executive officer of marketing, planning & business development at Bunna, argues that the 16pc increase in paid commissions should not be interpreted as mere expenses.

"It is normally considered part of the increase in premium," Endalkachew said.

“The pace of increase in expenses at Bunna is concerning, and the management should carefully watch this area," according to Abdulmenan.

The expenses soared since the firm procured a five-storey building in the backyard of the African Union for 126 million Br, according to the CEO, who says that it will be helpful in the future for addressing the increasing rental payments for office use.

Dagnachew also says that the firm has contributed money to the internally-displaced people and for the under-construction riverside development project.

Claims of the firm have increased due to two major incidents that made Bunna pay out five and three million Birr claims for the bond it covered for contractors and political risk policy, respectively. It is coupled with a motor insurance claim increase, due to the increasing number of traffic accidents.

However, Dagnachew argues that all the expenses were offset adequately, as they are not finally reflected in the underwriting surplus, which increased by 28pc.

There was a massive increase in the insurance company’s total assets that went up by 20pc to 420.8 million. This included the 167.2 million Br and 71.2 million Br, respectively, for savings investments and shares. These investments increased the total assets of Bunna by 56.7pc, up from 48.3pc in the previous fiscal year.

“This is a good investment strategy,” the expert said, commending the management of the company.

Abdulmenan noted that the liquidity level of the insurance company was quite reasonable.

Bunna’s capital and non-distributable reserves accounted for 28.2pc of its total assets.

“As Bunna is well-capitalised, it should use its strong capital base to increase its shareholders’ returns,” Abdulmenan recommended.

Teklu Arga, a shareholder of the company and a lecturer at Jimma University, is delighted with the performance of the company over the past five years.

"All the expenses of the company will help it enhance its competitiveness and reputation in the long run," he told Fortune.