Awash Comes out as Most Capitalised Firm 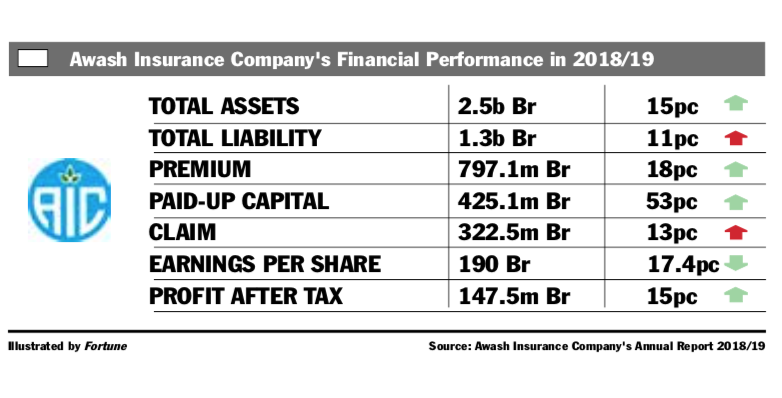 During the reporting period, Awash did well in the general insurance business and with its investment activities.

Despite losing the most-profitable position to its nearest competitor Nyala, Awash Insurance continues to lead the industry as the most capitalised firm.

In the last fiscal year, the company had a remarkable increase in profit, netting 147.6 million Br. Its nearest competitor Nyala Insurance netted 69.5 million Br in profit, giving it the leading position in the industry.

Despite the increase in profit, Awash's earnings per share (EPS) slipped by 17pc. The EPS fell by 40 Br to 190 Br, owing to a massive injection of fresh capital. Despite the reduction, the EPS of the firm remained strong.

The management should have a capitalisation policy that maximises the returns of the shareholders, said Abdulmenan Mohammed, a financial analyst with close to two decades of experience.

An increase in gross written premium, a stable level of premium ceded, and an increase in investment income helped the company to sustain profit growth.

Gudissa Legesse, the new CEO of the company, explained that the profitability of an insurance company can be measured in terms of expense and income control.

"Considering this, we did good in terms of underwriting activities and equity investment activities," he said.

Hambissa Wakwaya, the board chairperson of the company, remarked that the underwriting of the company grew despite the challenges in the economy.

"Underwriting surplus grew significantly against the backdrop of many challenges in the industry and the broader economy," he wrote in his message to shareholders.

Awash’s gross premium increased by 18pc to 797.1 million Br. Out of this, 23pc has been ceded to reinsurers. The 78pc retention rate slightly rose from last year’s rate of 76pc and remains in line with the private insurer average.

The company efficiently handled fees for agents and brokers, according to the CEO.

"We cross-check and balance when agents bring us business," he said.

The surge in gross written premium was accompanied by increases in claims paid and other provisions. Net claims paid and provided for went up by 13pc to 322.5 million Br.

Claims reports were filed every day in a computerised format, and the management was seriously following and controlling leakage areas, according to the CEO.

Awash’s performance in investment activities was impressive. Interest earned on savings increased by 29pc to 73 million Br, and dividends earned on investments jumped by 35pc to 55.8 million Br.

"The growth of expenses is a bit concerning," said Abuduleman. "The management should pay attention to areas that are costing the company a lot."

During the last financial year, Awash spent 15 million Br in the form of sponsorships and donations. Its advertisement costs, employee benefits and office rent are rising occasionally.

It transferred 28.5 million Br from its profit and loss account to its life fund. Even though the transfer is lower than the preceding year’s, it consumed a good chunk of Awash’s profit.

"The firm should review its life insurance business to make sure that policies are properly priced," said the expert.

Liquidity analysis shows that the liquidity level of Awash is far lower than the private insurer average of eight percent.

"The management should make sure that the insurer has adequate liquid resources for its day-to-day operations," commented the expert.

The CEO argues that the management set a financial forecast to control its liquidity.

"Last year’s cash flow and capital of Awash was good and in a good position," he said.

The capital and non-distributable reserves of Awash accounted for 42pc of its total assets.

This shows that Awash is a well-capitalised insurance company, according to Abdulmenan, who recommends management use its capital efficiently.

Tsegaye Sori, a shareholder of Awash for the past seven years, says that the previous management played a significant role in making the company profitable.

"I hope the new management will sustain that," he said.

Awash Winery Propels Its New Brand of Cocktails
Share this...