The 200 agricultural input shops will be built within three years 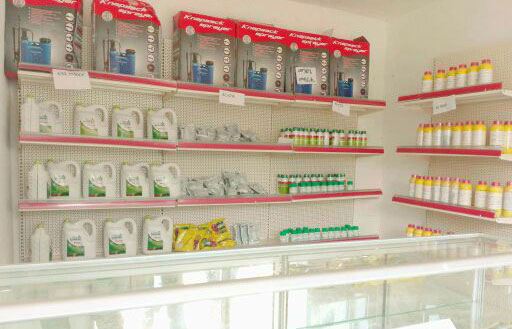 The one-stop shops will sell agricultural inputs such as fertilisers, pesticides, agrochemicals, veterinary drugs and seeds along with advisory services.

The government is engaged in setting up nearly 200 one-stop agricultural supply shops within three years in four regional states at an estimated cost of 624 million Br.

The Agricultural Transformation Agency, in collaboration with the Ministry of Agriculture and regional bureaus, will establish the shops through a public-private partnership arrangement. The project aims at expanding smallholder farmers’ access to agricultural inputs such as fertilisers, pesticides, agrochemicals, veterinary drugs and seeds along with advisory services.

The project aims at improving smallholder farmers’ productivity, food security and incomes through the development of private sector driven and market-oriented agricultural supply and services, according to Yitbarek Semeane (PhD), director of inputs at the Agency.

"Agricultural productivity in Ethiopia is low, due largely to limited availability of inputs," said Yitbarek.

Studies show that Ethiopia is one of the lowest countries in terms of agricultural input utilisation. Fertiliser and pesticide use per hectare of arable land is 18.47Kg and 0.25Kg, respectively, well below the average. Ethiopia has 71.4 million farmers who cultivate 13 million hectares of land. As of the last fiscal year, the contribution of agriculture to GDP was 34.9pc.

The scale of agricultural activities in the regions and how the benefits of such shops could be maximised were the two primary criteria in selecting the four regional states, according to Yitbarek. To date, the construction of 53 centres has been initiated with six shops already completed. The construction of 10 more centres is also expected to be finalised before the end of this year.

In the selected weredas, the Agency held an outreach campaign where it communicated and explained about the benefit of the shops, how they will be set up and operated, with the hope of getting private parties to vie for their ownership. The shops will be constructed and operated by beneficiaries including farmers, cooperatives and business persons who have submitted their proposals. They will be selected after the Agency conducts due diligence of the bidders, evaluates their financial capacity and existing assets, as well as their background and knowledge in the field.

The winning private party, at its own cost, then enters into a contract with the Agency to build the centre that lies on a 200Sqm plot within a nine-month period of time. The shops will be built in line with the Agency's design criteria including chemical safety rooms, a training area and staff facilities.

“We want the shops to be run by professionals,” said Yitbarek. “The Agency will pay the first year salary of the staff, and the shop owner will continue from there.”

The Agency will initially invest 30,000 dollars as a onetime service to supply each shop with agricultural inputs. The beneficiaries will then be on their own to stock the shops and maintain its operations.

The project kicked off after the successful closure of the four-million-dollar pilot project that was initiated by the Agency and USAID. The three-year project was completed in 2018 with 20 one-stop agricultural shops constructed in four regions. The project planned to serve 100,000 smallholder farmers to access agricultural inputs, create 150 jobs and generate a total turnover of 1.2 million dollars. At its conclusion the project ended up serving 400,000 farmers and generating a total turnover of 12 million dollars.

Alemitu Hordofa, the owner and general manager of Bako Farm Service Centre in Oromia Region State, where one of the 20 pilot shops is located, says the programme has been beneficial to both her and farmers of the area. When she opened the shop in mid-2017, she had eight employees. Now the number has grown to 15, and she has managed to build two more satellite shops.

However, Alemitu says that she is facing challenges in getting enough supplies due to the shortage of foreign currency to import the supplies. In the current fiscal year, Ethiopia imported nearly 1.4 million tonnes of fertiliser valued at 563.3 million dollars through 133 companies registered to import pesticides and other agrochemicals. However, experts in the area are critical about repeating the success rate of the pilot in the scale-up project.

Mohammed Aman, assistant professor of agri-economics and agri-business at Haramaya University, argues that the shops should not be viewed as a single entity by the Agency, stating that input demand of the farmers will differ from region to region depending on ecology.

"The supply of the shops should be demand-driven," said Mohammed.

He also warns that the Agency should not roll out and keep being involved in both securing the supplies as well as ensuring input prices at the shops, arguing that the purchasing power of the farmers should determine the market price.

"We can’t expect a free market when there are few suppliers,” said Mohammed. “Prices will go up."