Earning per share still slightly below two years ago 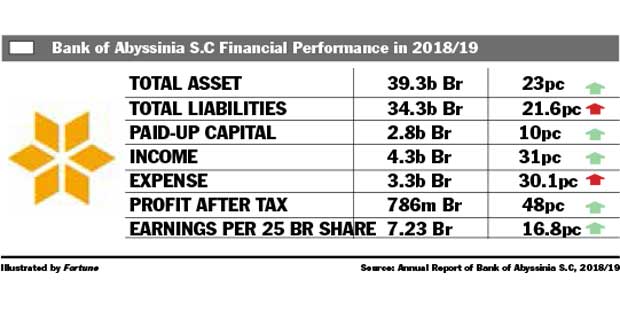 The Bank’s interest on loans, advances and NBE bills reached 3.5 billion Br, a growth of 29pc.

Bank of Abyssinia (BoA), one of the oldest private banks, doubled its net profit in the last fiscal year, placing itself in the list of the top three profitable banks.

The Bank's net profit grew by 48pc to over 786 million Br and earnings per share (EPS) rose to 7.23 Br from 6.11 Br. However, last year's EPS value is still two Birr less than what it was two years ago. The Bank's shares have a par value of 25 Br.

Meseret Taye, the board chairperson of the Bank, attributes the rise in paid-up capital to the stagnation of EPS growth. The 23-year-old Bank's paid-up capital has increased by 9.7pc to 2.8 billion Br.

Considering the external environment in the past fiscal year, the performance of the Bank was satisfactory, according to Meseret.

"Last year the insecurity in different parts of the country increased," said Meseret, "and the gain of the Bank in this situation is commendable."

Bank of Abyssinia's revenue from financial intermediation, especially from service charges and commissions, increased by 20pc and reached 606 million Br. The revenue increase has positively contributed to the rise in profits.

“The management of the Bank needs appreciation for this achievement,” he said.

Desalegn Yizengaw, vice president of the Bank in charge of financial management, also said that increased gains from interest income contributed to the huge leap in profit.

The Bank’s interest on loans, advances and NBE bills reached 3.5 billion Br, a growth of 29pc.

Earnings from foreign exchange dealing increased to 81 million Br from 12 million Br, flat with what it was two years ago. Yet it was still less than 40pc of the level in 2016/17.

Abdulmenan urges the management of the Bank to improve its performance on foreign exchange earnings.

The marked increase in revenue was accompanied by a huge expansion in expenses. It paid 1.5 billion Br in interest, a 43pc increase from the previous year. Employees' salaries and benefits also increased by 14pc to 984.2 million Br, while general administration went up by 33pc to 624.4 million Br.

The management structure revision, which was adopted in the middle of last year as part of the new five-year strategy of the Bank, has contributed to an expansion in expenses, according to the vice president of the Bank.

Even though the expenses of the Bank are high, Abdulmenan believes that the Bank was able to control the expenses.

“Considering the expansion of business and the level of inflation, it shows that personnel expenses are well controlled,” Abdulmenan stressed.

Loans and advances of the Bank increased by 32pc to 23.4 billion Br. The provision of doubtful loans, advances and other assets has increased by 25pc and reached 148.5 million Br.

"This should be worrying to management," the expert said, "and they should keep an eye on further expenses."

The total assets of the Bank jumped by 23pc to 39.3 billion Br. In the reported period, the Bank leased land and constructed new buildings including the head office in La Gare.

Deposits mobilised by the Bank also jumped by 25pc, pushing the ratio of loans to deposits up by almost four percentage points to 72.9pc.

"The rate is incredible, for which the management should take credit,” Abdulmenan said. “As the ratio is at an ideal level, the Bank should be careful from increasing it further.”

Abyssinia's investment in the recently removed NBE bonds also increased by 20pc to 7.6 billion Br, which accounted for 19.3pc of the total assets and 23.5pc of the total deposits of the Bank, which is about the same level as the previous year.

"The liquidity level of BoA is low, so it should take extra caution against a further reduction in liquidity," commented Abdulmenan.

Desalegn hopes the liquidity of the Bank will be addressed since the central bank has removed the requirements of the 27pc mandatory NBE bill purchase.

"The bill made us operate under tight liquidity," he said.

Shareholders are also delighted with the performance of the Bank, which expanded its branches to 337 and its account holders to 1.3 million.

Mekdes Aklilu, a stakeholder and managing director of City University College, acknowledges the high profitability of the Bank. He also says that the profit could not immediately translate into dividends.

"The Bank has been involved in investment such as branch expansion and asset acquisitions," he said. "All these investments will start yielding in the coming years."

"This shows that BoA is a well-capitalized bank," the expert said.

Ethics in Organisations Not Only Right, but Profitable