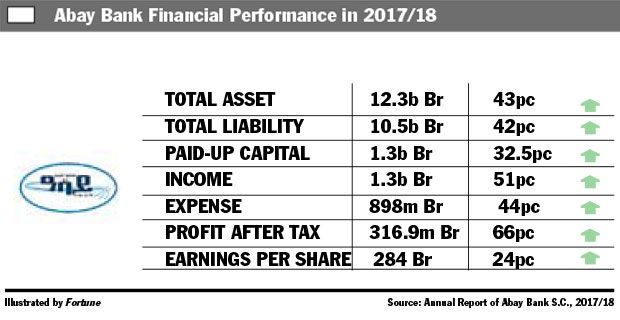 Revenues also shot up by 51pc to reach 1.3 billion Br in the reporting year. Income of the firm from interest on loans, advances and governing bank bills increased by 56.8pc to 873.3 million Br. Income from service charges and commissions went up by 61pc to 370.1 million Br.

Yehuala Gessesse, president of the Bank, attributed the success in performance on the new strategic plan the bank implemented.

"By focusing on our major strategic issues, we were able to sustain significant growth," Yehuala said in the firm's financial statement addressing shareholders.

Ethiopia Tadesse, board chairperson of Abay, attributed diversified income generating activities among other factors that helped the bank to be in a better position than last year.

Yehuala, who has been serving as president for the past three years, agrees with Abdulmenan.

Deposit mobilisation is another success area for Abay, which mobilised 9.5 billion Br, posting a 40pc increase. In the 2016/17 financial year, the banking industry mobilised 263 billion Br in deposits and disbursed 41.4pc of it.

“New branches and products, take the credit for that,” Yehuala said.

Shareholders of the banks have also celebrated the bank's positive performance.

Adugna Abebe, one of 4,080 shareholders of the Bank, is happy.

“Last year’s performance and return are much better than previous years,” Adugna, who has been a shareholder for the past three years, told Fortune.

The total value of the deposits the bank collected advanced by 61.65pc, showing a percentage point decline from the previous financial year. Thus, the loan-to-deposit ratio of Abay stood at less than the industry average of 70pc.

“Central Bank's credit cap has limited us from disbursing more loans, as we have to abide by the law,” Yehuala told Fortune.

Last year, the regulatory bank put a credit ceiling on loans outside the export and manufacturing sectors.

Liquidity evaluation shows that Abay has also improved in relative terms. The bank has 2.9 billion Br in cash and bank balance. The ratio of the liquid assets against the Bank's total assets went up by 23pc. Compared with the industry average, the Bank's ratio is higher by four percentage points.

“This shows Abay has huge liquid resources,” Abdulemenan comments. “It should make efforts to increase the loan-to-deposit ratio to the industry level.”

In return, its interest expenses soared, reaching 358 million Br. The increase in deposit interest rates by the Central Bank in October 2017 played a major role in the size of the expenditure.

The Bank trained 38.3pc of its employees with in-house and outsourced training.

The financial statement of the bank also revealed that bad loans and advances of the bank have increased by 9.5 times.

“The increase in loan and asset impairment is concerning and needs immediate attention of the management,” argued Abdulmenan.

The issue has got the attention of the Bank as well.

“With the economic slowdown, our clients being challenged to pay on time,” Yehuala said. “We will manage the issue in this fiscal year.”

The performance is less compared to some of its peers. In the same fiscal year, Oromia Bank registered a staggering 727 million Br in profits.

The eight-year-old Abay increased its paid-up capital by 32pc to 1.3 billion.

“This shows the Bank has a strong capital base,” Abdulmenan said. “The bank should use its liquid resources to earn more income.”

Awash Bank, Amref Team up to Sanitize Schools
Share this...