The project faces a backlash by people on social media 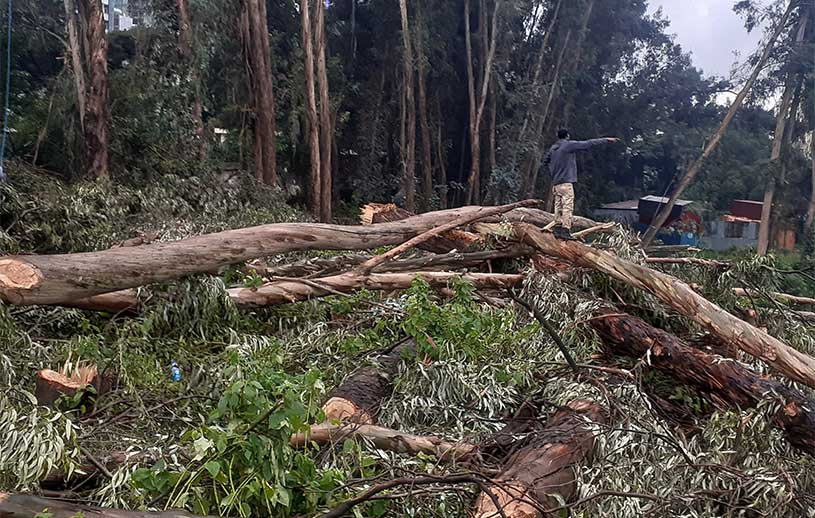 The clearing process, which started last Monday, August 12, 2019, has cut down 225 trees on the estimated area of 16,480Sqm of land and was almost over by the end of the week.

Long-standing trees behind the European Union Delegation Office located on Cape Verde Street have been cleared to open space for a new public park to be built by an organised youth group at an estimated cost of 150 million Br.

The clearing process, which started last Monday, August 12, 2019, has cut down 225 trees on the estimated area of 16,480Sqm of land and was almost over by the end of the week.

The new park, which will be built by Musse Biruk & Their Friends Entertainment & Greenery Development General Partnership, will consist of a library, a café, shops, a swimming pool, a fish pond, kids playgrounds, a gym and a cinema.

A letter that was signed on August 9, 2019, by Assemi Assefa, commissioner of Addis Abeba City Government Environmental Protection & Commission, permitted the youth to cut the trees down and sell the wood.

The decision to cut the trees came after the area was allocated to the youth by Deputy Mayor Takele Uma, according to the letter. The letter also states that the area was given to the youth to be used as a means of job creation and that it was designated to be a green park.

The idea of constructing the park was first raised around two months ago when the Deputy Mayor, together with other city officials, were taking a tour of the city, identifying possible locations for the tree planting campaign.

The land for the future park, which measures 16,480Sqm, includes 225 trees that the youth group is cutting down.

The cleared area, which is located on a dead-end root bordered by Kebena River, is uninhabited and was one of the sites the City Administration was considering for the tree planting campaign.

“When the Deputy Mayor came to the area, he sat down with us to talk, and we explained our situation,” said Musse Moges, general manager of the youth group that will build the park.

Takele allowed the youth to utilise the land for income-generating activity. Then the youth formed an association with 23 members and came up with their design for a park.

"Since the area is at the heart of the city," said Mussie, "we decided to make the best use of it and came up with the idea to turn it into a public park."

The group expects for the title deed of the land to be transferred to them in the next two weeks and plans to secure a loan from one of the banks.

The clearing of the area was met with a backlash by some on social media who pointed out the irony of cutting trees down after the government is campaigning to plant four billion trees this summer.

“This is in contradiction to the Green Legacy initiative," tweeted Sheimelis Araya, "after spending that amount of money to plant millions of seedlings, will they face a similar fate in the coming years?”

But the youth group believes that the backlash was the result of the public not knowing the details of the project.

"The place currently serves as a dumping site,” said Musse. “Besides, all the trees are non-native eucalyptus trees and were on the verge of collapsing.”

The people living around the area are also supportive of the project.

The area has long been deserted, and the community is behind them, said Cheru Zewdie, a resident in the area.

Located behind Kebena River, the project also falls under the 29-billion-Br River Revitalization Project that hopes to clean the riverbeds and riverbanks across Addis Abeba.

Experts in the area point out the potential of the project rather than the loss of trees.

Clearing the area falls under the objective of landscape management and renovation, according to Amare Bantider (PhD), a lecturer at Addis Abeba University's College of Development Studies.

He believes the city should use its land to the maximum capacity while continuing to sustain the greening actives.

"As the land was occupied by non-indigenous trees the new park can be used to plant more indigenous ones," he said.

However, Amare fears that limitations in knowledge and technical capacity of the youth in executing such a huge project might be challenging.

"The youth should partner with urban landscape professionals before commencing the project," Amare suggested.

Let's Not Miss the Endemic Trees for the Concrete Forest

What Works for Trees Applies to Country

The Old Meets the New in Addis' City Planning