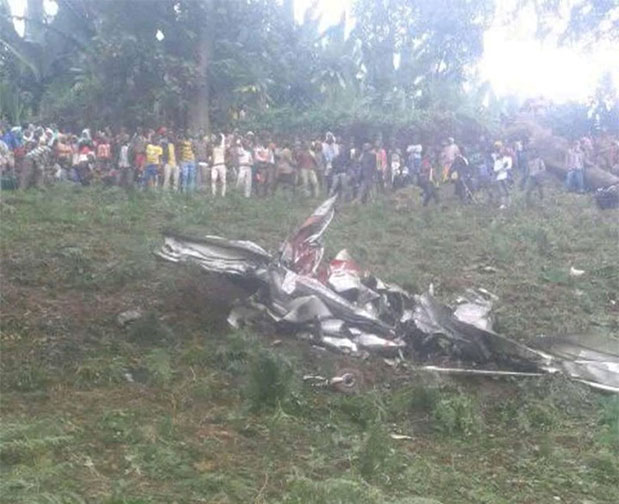 A Sudanese pilot was in training when his Cessna 172 Skyhawk crashed near Beyem Wereda in Jimma Zone on May 17, 2019.

A training aircraft by Abyssinian Flight Services crashed in Omo Beyem Wereda, 70Km Northeast of Jimma, on Friday, May 17, 2019. The plane crashed at around 10:00am while on its way to Woliso from Jimma, killing its 20-year-old pilot. The cause of the accident was not determined before the paper went to print.

Half an hour after the Cessna 172 Skyhawk model aircraft’s take off, the pilot, a Sudanese national, lost contact with air traffic control. The pilot had trained for four months and had two more months left to complete his training. He was the only person in the aeroplane.

A team composed of members from the Accident Investigation Bureau of the Ministry of Transport, Abyssinia Flight Services and the Civil Aviation Authority headed to the crash site to assess the situation on the ground following the accident.

“The preliminary report on the accident will be disclosed in a month,” said Ashenafi Tsegaye, project manager at Abyssinian Flight Services.

The company had three training aircraft in Jimma, including the one that crashed, out of an overall nine. The first to open a private pilot training school in 2006, later expanded into an aviation academy, Abyssinia trains pilots for private and commercial piloting. Private aviation, which the Sudanese pilot was training for, requires 58 flight hours over six months, while commercial aviation requires 111 flight hours over a year.

The model of the aircraft the pilot was training in at the time of the crash was a Cessna 172 Skyhawk, a four-seat, fixed-wing aircraft made by the Cessna Aircraft Company in the United States. As of 2015, the company and its partners had built more than 44,000 of this model.

Abyssinia had five of these aircraft including the one that crashed. The aeroplane that went down was bought three years ago for half a million dollars.

The latest crash is the third of its kind in a little over six months. On March 10, 2019, Ethiopian Airlines Flight 302 crashed in Tulu Fara Wereda, 40Km south of the capital, while travelling from Addis Abeba to Nairobi, killing all 157 passengers and crew on board.

A month later, on April 26, 2019, a helicopter owned by MIDROC Ethiopia Technology Group’s subsidiary company Trans Nation Airways crashed around Bole Bulbula, a close distance from Bole International Airport. During the crash, there were two pilots, and five passengers on the helicopter, all of whom survived.

A senior captain with more than two decades of flying experience who spoke to Fortuneon the condition of anonymity, argues that the frequency of accidents recently is coincidental.

“We should be careful not to read anything into them, since all three accidents have different causes with no discernible pattern," he said.

Nonetheless, he believes that Jimma is a challenging area in which to train pilots.

“It has a mountainous landscape and frequent cloud cover," he says. “Bahir Dar and Dire Dawa are more suitable.”

Training: the Answer to Every Siege Against One's Profession