The company will sell the power to EEP for 0.025 dollars a KWh 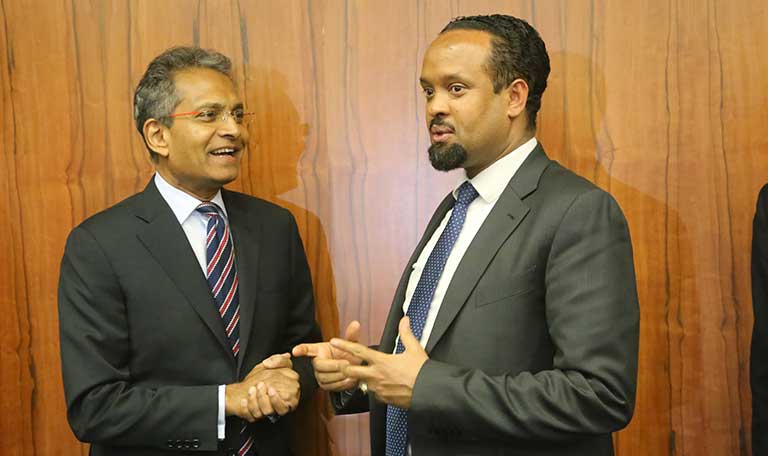 Paddy Padmanathan (left), CEO and President of ACWA, and Ahmed Shide, minister of Finance, spoke at the signing ceremony at the Ministry's headquarters on October 17, 2019.

The Saudi Arabian power company that just one month ago won a contract to develop two solar farms, which will have 250MW in combined capacity, has already commenced mobilizing for the project.

ACWA Power, which will develop a power plant with its own 300 million dollars in financing, started clearing the two sites and hiring employees that will engage in the development of the projects. One of the projects, Gad, is located 40Km from Dire Dawa in Somali Regional State, while the other project, Dicheto, is found 90Km from the town of Semera, close to the border with Djibouti in Afar Regional State.

The agreement for the two projects was signed early last week between Ahmed Shide, minister of Finance and the chairperson of the Private Public Partnership (PPP) Board, and Paddy Padmanathan, CEO and President of ACWA. Ethiopian Electric Power has also joined the two parties in signing the contractual agreement that will last for 15 to 20 years.

The Saudi Arabian firm will develop the two solar farms on the land provided by the government of Ethiopia. The company won the bid after vying with  four other companies that made it into the screening stage. Initially, a total of 12 pre-qualified prospective bidders took part in the bidding process after being shortlisted by the board of the PPP directorate.

EDF Group from France, Enel Green Power from Italy, Globe Elec from the United Kingdom, and a consortium of Abu Dhabi and Belgian firms, Al-Nowais, were the other shortlisted companies to bid after meeting the term sheet and the financing terms.

ACWA secured the project after fulfilling the requirements that include bankability and financial capacity. The other companies could not raise their own investment funding, a request by the Ministry. Previously, it was a common practice for the government to issue currency convertibility guarantees to borrowers for such kinds of projects.

In issuing a guarantee, the government was responsible for covering the variations from exchange rate fluctuations within the project period. Lately, however, it has withdrawn from this guarantee and requested that bidders raise their own investment funding. ACWA was the only company that fulfilled the requirement.

Coming with its own financing, ACWA offered 0.025 dollars a kilowatt-hour to sell the power it will generate from the two farms to Ethiopian Electric Power.

"The price ACWA offered is the cheapest quoted in Africa and globally," Abraham Belay (PhD), CEO of EEP, told Fortune. "And it will increase the electric power coverage of the country significantly."

"But none of them had filed a grievance," said Haji, "so we proceeded with the agreement signing."

After buying the power from ACWA, EEP will distribute it to users from the national grid at its own tariff.

The power purchase agreement between the EEP and the developer is not signed yet but will be signed soon, according to Abraham.

Currently, EEP operates and maintains more than 12 hydropower and three wind power plants. These plants generate 4,290MW of power, which is distributed across the country.

The board of PPP has approved eight solar power, five hydropower, and three road construction projects.

Along with the project ACWA secured, the government is processing the procurement of six other power plants at Metema and Horso, Weranso, Welenchiti, Humera and Meqelle. The last four projects are expected to generate 500MW each.

These projects will play a significant role in upgrading the energy supply capacity of the country, according to Tigabu Atalo, an independent power consultant.

He also said that solar power, which is environmentally friendly, serves as the second source when there is no electric power from other sources such as hydropower and wind.

Artisinal Miners in Gambella Extract Gold Worth $59m
Share this...