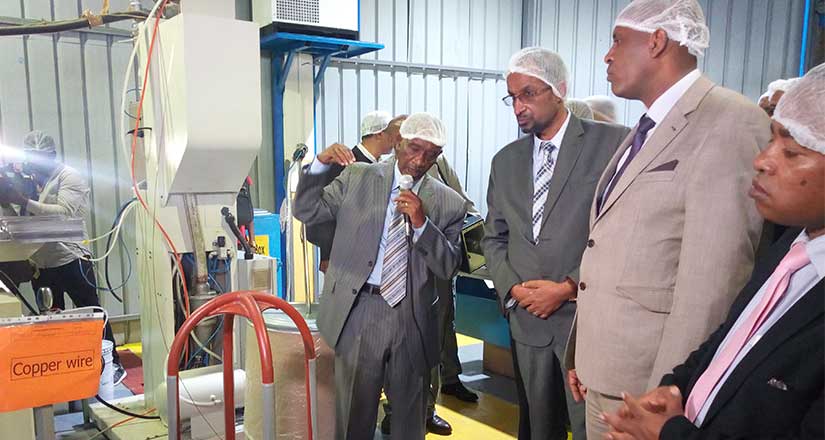 MIDROC Technology Group inaugurated the third major expansion project in a month, pushing the total investment for the projects to 574 million Br.

Cork, tin can and glass factories have undergone the latest expansions. The inauguration of three factories located at Legetafo was held last Thursday, August 15, 2019, with the presence of Arega Yirdaw (PhD), CEO of MIDROC Technology Group, and Teka Gebreyesus, state minister for Trade & Industry.

The Group expanded the factories in response to the call of Prime Minister Abiy Ahmed (PhD) to boost the economy, according to Arega.

"We're expanding to different new projects to support the initiative," he said.

Daylight Applied operates two crown cork factories, which were established with 72 million Br in investment and employ 53 workers. One can produce 700,000 crown corks in just eight hours, while the other can produce double that amount in the same period.

Using coating and printing and blanking and lining machinery, the crown cork factories produce different sizes of corks and print customer logos on the corks. The factories produce 1.8 billion corks a year, which are used to seal bottled products like soft drinks and beer.

Moha Soft Drink Industry S.C, one of the affiliates of MIDROC Group, has a demand of 1.4 billion corks a year and began buying 20pc of its demand from Daylight five months ago.

“Two years ago we faced a shortage of crown corks, which forced us to produce only 40pc of our capacity,”  said Getachew Birbo, CEO at Moha.

The second factory, a tin can plant, was built for 57 million Br and can produce 36,000 tin cans in three different sizes in eight hours. The factory, which employs 60 people, has two sections, the body making line and the end making line. The factory produces 28 million tin cans a year, which are used for packaging peeled tomatoes, tomato paste, vegetables and meat soups.

However, production was suspended in February 2017 due to a technical problem occurring in its glass melting furnace. The factory is not operational to date.

“The expansion will save foreign exchange, which was previously used for importing corks and tin cans," said Teka during the inauguration ceremony.

Daylight was established in 1994 as Daylight Engineering Plc when it acquired the state-owned Sara Lamp Factory, which used to make incandescent lamps and glass tubes (fluorescent lamps), with a capital of 35 million Br. However, production was discontinued due to the lack of market demand at the time.

Daylight joined MIDROC Ethiopia under its current name, Daylight Applied Technology, in 2004. Currently, the capital of the company has reached 162 million Br. Through its cork and tin can factories, it employs 159 permanent employees, including the 46 employees of a glass factory, which is currently providing printing services.

Hailemariam Kebede (PhD), a lecturer at the Marketing & Management Department of Addis Abeba University, appreciates MIDROC for investing in the manufacturing sector.

Most companies are hesitant to invest in the manufacturing sector because of the complicated procedures and the time it takes to generate profit, according to Hailemariam.

"The company should work toward restructuring its management and exporting its products to foreign markets," Hailemariam said.

MIDROC will keep on expanding, according to Arega.

"The company is conducting a study to start a food and beverage packaging service," Arega said.

The coalition under the EPRDF as it has been known for the past three decades is over...

Three Firms Link Up to Ease Merkato Congestion
Share this...